on her Bio of Sir Francis Bacon 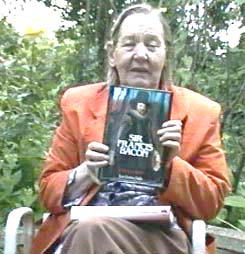 Jean Overton Fuller is an honors graduate in English from the University of London and has also undertaken post-graduate work in phonetics and comparative philology. In addition to Sir Francis Bacon, Jean has written biographies of Swinburne, Shelley , Blavatsky and Her Teachers , The Comte de Germain , as well as the best-selling Madeline (reissued in an expanded form as Noor-un-Nisa Inayat Khan. This is the biography of Noor-un-Nisa, daughter of Inayat Khan the Sufi Master, whose heroism during World War II was posthumously recognized by awards of the George Cross and the Croix de Guerre. She is a modern model of courageous devotion to one’s ideal.)

Jean lives north of London where she likes to paint in her free time. One of her favorite subjects to paint are her cats and she even published a book (Cats and Other Immortals) containing portraits and stories about them. This interview was held July 2nd, 1994, in her lively back yard where birds could be heard chirping. —Lawrence Gerald

How did you get interested in writing a biography of Francis Bacon?

It happened when I was younger, that’s to say when I way fifteen. I went for a fortnight with my mother to Stratford to see the plays (I knew all the plays), and the afternoon we arrived I was sitting in my hotel bedroom, and thought, I’ll try something I haven’t read yet, the Sonnets, and I read and I read and became very puzzled, as well as entranced because I couldn’t make out the relations of these people to each other. There’s this young man and there was this dark woman. Well I would understand the Sonnets better if I knew who they were addressed to and something about the life of a man. I turned back to the brief biography and it didn’t seem to me to tie up or illuminate the poems at all. I mean not only was there no mention of a wife or children, but sitting there in that hotel room I feel I was coming to know a very lonely man, certainly a bachelor, and certainly very lonely, then it was time for me to go down to the dining room for dinner with mother and I told her about this and I said, for all the help that biography of Shakespeare at the beginning was, it could have been about a different person, and some people think it was (laughter). I never feel the working of a single personality. Some people think he didn’t write them. Some people think it was a man called Bacon.

Well, I had never heard of Bacon. From that time on I kept my eyes open and looked out for what I could find (laughs). And so it went on; after that I grew up. Well I decided I really must research the question myself. I have written books on quite different subjects, about French resistance during the war , mysteries concerning that and also literary biographies of Shelley, Swinebourne. Well I said to myself I really must try the big mystery — The Bacon-Shakespeare Mystery. Is this a myth or is it something? It took a long time to write this biography, longest of any of my books, 17 years in fact. The chief reason being the old handwriting being extremely difficult to read until one gets into the way of it. And I got into it and I went back to the original manuscripts most of which are in the Library of Lambeth Palace. And I went to Gorhambury to see the large portraits, and then there’s the mystery concerning his birth, he so obviously is not the child of the people whose child he was suppose to be......

Now your book, (Jean holds up her book) goes into detail about the portraits you observed at Gorhambury and elsewhere.

You came up with some significant insights about Francis Bacon and his parents Nicholas and Anne Bacon. What can you say about that?

I was puzzled because Francis was the only dark-eyed child in the family of blue-eyed and grey-eyed people. There is an entire family tree where one can see a reproduction that they are all obviously fair. And I wrote in the beginning to a friend who’s a Doctor and she wrote me back that it is very rare for light-eyed people to produce a dark-eyed child. The other way around can happen but for fair-eyed to produce dark-eyed, is very unusual, unless one of the fair-eyed people has an odd gene that is producing dark eyes. But if that happens, if there is an odd gene, it will show up every time in every child of the family, so one will know that this is a light-eyed gene playing dark-eyed. This is what’s so for Anthony Bacon. He is light-eyed, grey and this is so for the other sons Nicholas and Nathaniel. Well my Doctor friend suggested I contact a geneticist. She gave me the address of one at Oxford at All Souls. I gave him the evidence. He thought it was very heavily weighted against Francis Bacon being the child he was suppose to be.

His features then are closer to Elizabeth and the Earl of Leicester’s (Robert Dudley)?

Oh Yes. (Reading from the book) In the portraits of Elizabeth, her eyes are shown to be brown, black-brown, or black. In Leicester, his eyes are brown though not as dark as Elizabeth’s. His hair in all his portraits even to old age shows profusely curling as is Francis; he had curly hair unlike the other Bacon boys. Between Elizabeth and Leicester the characteristics to producing a child with dark eyes and curly hair are all there. This of course does not prove they did so, only that in respect of Mendel’s law they had the genetic capability Sir Nicholas and Lady Anne Bacon lacked. With regard to features, Leicester has Francis’ nobly-curving brows and he has Francis’ eyebrows. His nose, however, is short and straight whereas Elizabeth’s nose is long, like Francis, but somewhat thinner and certainly more pointed at the tip. There is a nose which exactly replicates Francis’; it is long but has a slight bulging of flesh at the tip, and may be seen in Holbein’s portrait of Henry VIII.

You mention in your book that the odds were 100,000 to one that Francis could be the offspring of both Anne and Nicholas Bacon?

That’s right. (She opens her book to a page with the passage) The geneticist, Professor Brisco Ford, [Fellow of the Royal Society, Fellow of the All Souls and Emeritus Professor of Genetics] at Oxford says, "You can certainly quote me as saying that if Sir Francis Bacon had dark brown eyes and both parents had grey, the chance that he is illegitimate is very high indeed, it will be down to a mutation level which in this case will be less than one to 100,000." That’s strong enough isn’t it?

What else can you say from your book that you think was original or unique research that you uncovered?

(Birds are singing in the background) I based my investigations not on cypher but examination of the plays and sonnets, and they do seem to me to contain much of what could not have been known to Shakespeare but could only be known to Bacon. For instance in The Tempest there is a description of a shipwreck, and the conditions of which the shipwrecked people managed to survive on an island. (this is now being pointed out from the chapter called The Mysteries, p. 219):

The Tempest must have been composed soon after, since it was performed at Court on November 1st, 1611 and was obviously inspired by the wreck of the Sea Venture. This ship had been one of nine which sailed from Plymouth on June 2nd, 1609, bound for Virginia. On the 24th they were struck by "a most dreadful Tempest", which drove the Sea Venture apart from the others. ... she had been wrecked upon a shore between two rocks ... although she was wedged between them and stuck in the ground, no one was harmed. The island, which was uninhabited, had a most balmy climate (it was Bermuda), and fruits, fowl and fish were all to be had for the taking, so that they spent pleasantly the months occupied in repairing the ship. They eventually arrived in Virginia in May of the following year, 1610 ... [William] Strachey was appointed secretary to the council, and on July 7th, 1610, sent a letter home by [Sir Thomas] Gates which begins "Madam", and contains the material used in The Tempest.

This is mysterious, because the letter was not published for fifteen years and contains an account of the lamentable situation found in Virginia which was certainly confidential. Professor Gayley worked out that the lady to whom it was addressed must be Elizabeth, the daughter of the Earl of Dunbar and the wife of Lord Howard of Walden. ...

The only people who would have seen that letter would have been the other members of the board because they did not want to discourage further explorations or investment which was most urgently needed for the Colony.

The puzzle for Shakespeareans is, how did the actor from Stratford obtain access to Strachey’s text? Professor Gayley wrote to A. W. Pollard of the British Museum to ask if there could have been a private printing, but received a negative answer. "It would have ruined Strachey’s career to have published it at such a time; the wardens of the Stationers’ Company would never have passed it ..." ...

In the Introduction to the play in the Arden edition, (F. Kermode 1954), it is averred Shakespeare must have known some member of the Company who acquainted him with the details, and it is remarked that Shakespeare had acted in Jonson’s Sejanus, and that was when this was printed, in 1605, both Strachey and Sir Dudley Digges wrote laudatory verses for it. But that was before Strachey set to sea, and he did not return until after The Tempest was performed. [1611]

Moreover, the parts about the conditions in Virginia being practically a state secret, it would have been a great breach of confidence on the part of any member of the Council to whom it had been circulated to lend it to the actor. But if the author of the play is Bacon, it would have come to his desk as a matter of course."

Good point. Also of note is the extensive analysis of various types of wind that Bacon writes about in his book The Natural and Experimental History of Winds. So he educated himself thoroughly about this phenomena of nature which he may have utilised in The Tempest and even his New Atlantis. So in your estimation you learned more that confirmed that Bacon was Shakespeare?

Oh yes. I myself don’t doubt it. And you think of the period of which The Tempest was written, the end of it, the magician [Prospero], breaks his magic wand, which raises this world a mystic shadow in order to take up his Dukedom. I think that was written right before Bacon was given a great office of State which he knew would take up all of his time, and he wouldn’t have further time to be given to the theatre, the shadow world, which had been his delight....... (Birds chirping.......) 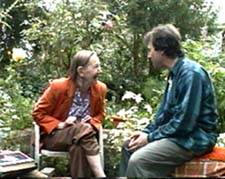