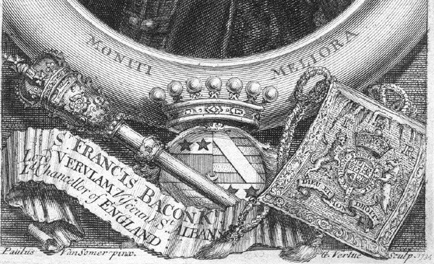 Bacon's times were like 4th century Rome - and like our own. The central power was failing. Regime changes were bargained and fought over. Religions were part of national deals. War was the continuation of domestic politics.

Francis believed he was a natural son of Queen Elizabeth and wore royal purple at every ceremony. His nominal father left him no inheritance, implying he was the ward of the Queen. His nominal mother, herself a member of the Court power elite, was a brilliant Protestant and tutored Francis in five languages. From childhood he was recognized as having a brilliant mind (possibly comparable to that of John Stuart Mill).

At age 13 he left Oxford in protest against its archaic Scholasticism. Several things unique to "The Modern"  in England were all "unwritten" in origin: the common law,  constitution' were not related to either matter or transcendentals; rather to special behavioral templates identified with being English, such as the unwritten obligation of the English to observe 'Right Form' and live by the code of the 'Done Thing."

Many cultures have started out from pre-literate foundations similar to England's and moved beyond them to written laws and codes. The English did culture-making differently. One distinctive feature was the art of making the unwritten intelligible. The basis for this lay in their unique unwritten common law. The principles they developed for judging and discovering the dictates of the unwritten law were extended to nearly everything but especially to government and science: constitutionalism and scientific empiricism, two identifying emblems of The Modern in England.

Francis Bacon invented a new phenomenological element he called schematismus, a term with many meanings in philosophy, especially in Kant. First he performed a semiotic operation on judge-made common law rulings. Then he gave phenomenological 'reality ' to the hypothesized law behind the rulings in the case reports made by judges when they applied the English unwritten common law.

He refined that phenomenon and extended it beyond 'judicature' as he called it, to include hypothesized unwritten laws of both society and nature. Then,applying what Coleridge called his 'Platonism of things rather than words', he developed his new semiotic case method of law-finding into a generally applicable New Organon - Hooke termed it a 'logic engine' - permitting the invention of a new 'Scientific Empiricism' based on phenomenology rather than on the tabula rasa sensation psychology that Locke visited on empiricism, for a while.

Isaac Newton's celestial mechanics is usually contrasted sharply with Baconian Scientific Empiricism. But Newton said he was a Baconian. He explained in the Optiks how his adaptation of Baconian empiricism led to him to a foundation for modern physics. Kant refined the logic of phenomenology and christened it as his own revolution in thought, providing a foundation for the philosophy of modern science.

The Archimedal switch-block of the trackway of the Modern was manned by many hands but the strongest was that of Francis Bacon who after his impeachment, and with talented assistants like Thomas Hobbes, ran his Verulam like the ministry of invention called Salomon's House in New Atlantis (Wheeler, 1991).

Semiotic Flaw: The ancient sciences were written in the demotic languages of their time, which doomed them to failure. As Bacon explained, the laws of nature are not written in any people's vernacular - Greek, Latin, English, or even Law French. Bacon concluded that if he tried to express his philosophical demonstrations in plain English, contemporaries might understand the words but not their scientific import. He did not want the general estimation of the worth of his scientific writings to be determined by the opinions of philosophical incompetents. Bacon never fully resolved his quandary over how plain-spoke to make his basic theory of scientific law. Yet his fear was fully justified.

Starting with Ellis and including even most modern philosophers of science, his work has been mistakenly interpreted and mis-judged. He tried to solve the communication problem through essays, myths and the novel, New Atlantis. The paradoxical result was that foreign readers like Voltaire(Voltaire, 1961) and Kant(Kant, 1929), who used Bacon's Latin versions (he arranged Latin versions of even the articles he wrote first in English) understood him better than did many English language scholars, including especially the translator of Bacon's scientific writings, Robert Ellis! Through a fortunate accident, the research described here happened to begin, not with Bacon's philosophy but with an intensive study of Bacon's legal and constitutional theories. (Wheeler, 1947; Wheeler, 1949) That is the way he himself started. To follow in his path from law to science required something like Foucault's archeology of ideas. My approach was really pre-structuralist, combining explication de texte with conventional foot-slogging exploration.

90% of  the best work done in today's experimental labs, especially in biology, is performed much the way Bacon prescribed. (Wheeler, 1990).

Although his popular writings were models of clarity, many of his philosophic and scientific works, especially their Latin versions, were studiously opaque.

His obscurantism was not like that found in a family recipe whose secret ingredient is withheld, as was done in many hermetic writings. Bacon's obscurity was deliberate. It derived directly from his philosophy of science. He had concluded that one of the reasons for the failure of the ancient philosophers and scientists was semiotic: their logic of inquiry was about words rather than things. His logic of inquiry corrected that.

Here are some of Bacon's inventions:

In fact, I have composed ATLANTOS - an updated version of Bacon's New Atlantis.

The key to Francis Bacon is in the last document he corrected: New Atlantis. Like his other main writings it is his correction of the classical document of the same name: Plato's Atlantis. As with New Organon, New Atlantis reverses the classical version - Plato's - and starts not with a corrupted society but with Bacon's own vision of an ideal society operating according to Bacon's own view of science - "natural science" based on "natural history" (the data on which Bacon's own "science" - "Scientific Empericism" - works.

Note: it was written BEFORE the modern corporation. It is NOT a corporation-dominated society. On the contrary, it is a "sciential" society run by a constitutionalized Salomon's House whose prime minister is based on the "regency" Bacon directed while King James was on vacation with his Court in Scotland.

NOTE: There is no king in New Atlantis.

In short, is the model of a sciential society - constitutionalized - and remains today a valid model for a contemporary - 2004 - society run and maintained scientifically - as with Bacon's own Chancery - but brought under science - Baconian science.