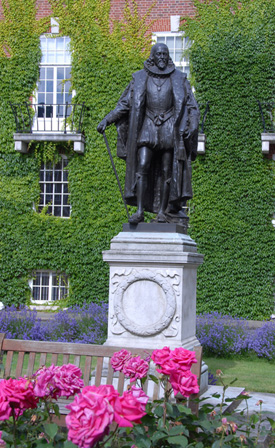 This Document, It Is Contended, Strikes at the Heart of the "Stratfordian Myth"

(Reprinted from the Philadelphia Public Ledger, Sunday, May 10, 1925)

-Thanks to Juan Schoch for preparation of text-

To the Editor of the Public Ledger:

Sir I have noted a dispatch, wirelessed from London, concerning the Northumberland Manuscript. This manuscript is well known to all Baconians, and, in fact, a complete facsimile copy of the entire document is in possession of the Bacon Society of America.

Your correspondent is woefully wrong in regard to many things connected with it. He says that is has twenty-two sheets, whereas, as a matter of fact, there are 90 pages, written in the beautiful hand, apparently, of John Davies. Leicester's "Commonwealth" is the bulk of the matter which has been preserved for us, although there was evidently much more in the manuscript at one time.

The scribbling which you speak of is not all scribbling by any means. On the right-hand column of the first outer page of the manuscript is a list, obviously, of the manuscripts which it had contained. This column is written, the first of it, in the modern script and cites several of Bacon's acknowledged works. Then it goes into the old-fashioned script, with some variations down the column, citing "Speeches for my lord of Essex at the tylt"; "Orations at Graies Inne revels" and the name of Francis Bacon, which your correspondent, for obvious reasons, does not mention at all, occurs quite a number of times in the course of this column. Finally, when it comes down to the next two Shakespeare plays, "Rychard the Second" and "Rychard the Third," the name of William Shakespeare first occurs, and in front of it have been written the words, "By Mr. ffrauncis," so that it reads,

"By Mr. ffrauncis William Shakespeare," and upside down, under the word, "ffrauncis," appear the mysterious words (that is, mysterious to those who have not penetrated into the inner facts), "your sovereign."

All this is in a comparatively regular right-hand column of the cover. Then, on the other side, the left-hand column, come in quite a large number of different expressions and words, some upside down and some right side up, some English and some Latin, including, the line, which you cite as a line from "Lucrece"; but your correspondent makes a mistake, because on the manuscript it says,

The terminal word has apparently been changed to make a suitable rhyme.

The long Latin word from "Love's Labour's Lost" does not appear on the manuscript in completed form, the last three syllables being omitted. There are one or two places in ancient Latin literature where this word seems to be brought in, but it is thrown into the text of "Love's Labour's Lost" without any apparent reason. The clown says to the page:

"It is a wonder thy master has not swallowed thee for a word. Thou art so long by a head as honorificabiltudinitatibus."

As for the material being in the handwriting of William Shakespeare, the actor, to make such a claim requires an imagination of a most extraordinary caliber. All we know of Shakespeare's hand are the three illegible, scribbled, alleged signatures on his will the names written three times on the same day and not spelled twice alike, and, in fact, to be perfectly honest, it is now spelled at all, but simply scrawled. Whether these signatures were written by the actor or not is quite open to question, as the document itself leaves doubt as to whether it was signed or simply marked by him.

The letter "S" is the regulation form of letter "S" in the old script, before the introduction of the new, and it appears several times on the Northumberland Manuscript. Why our correspondent should speak on eloquently concerning the name of William Shakespeare on this manuscript and never mention for a moment that the name of Francis Bacon occurred on the manuscript as often as Shakespeare is a specimen of the extreme frankness with which those who are trying to bolster up the Stratfordian myth handle the situation.

Aside from all controversial matter, the manuscript is interesting as being one of the very few places where the old handwriting and the new appear side by side, on the same page, and, in fact, a positive transition is shown the long Latin word above mentioned being written in a much plainer hand, nearer like the modern script than the majority of the rest of the matter.

It is well known to all careful students of the literature of the period that Francis Bacon changed the English language from the language of Chaucer to the language of Milton through his wonderful work. During his period on the Continent he learned the Romance languages, and realizing from them that the English-speaking people did not possess a language worthy of them, he started in to remodel it and produced the English which we now know.

His vocabulary is shown in the Shakespeare plays as nearly 20,000 words, more than twice that of any other writer of English. Of course, Gamaliel Bradford (author of "Damaged Souls") says that this tremendous vocabulary is an evidence of illiteracy. Another flight of Stratfordian imagination.

Bacon not only changed the language but he changed the printed page from the old black letter to the modern type, and the written language also underwent, under his hand, the change which is shown on the face of the Northumberland Manuscript, just as the German language is now undergoing a change from the old script, somewhat similar to the old English, to the modern, so-called, Latin text, now used in a very large proportion of German works.

The date of the Northumberland Manuscript is interestingly fixed by the following fact. It shows the transition from the old kind of writing to the new. Our society has in its possession photographic facsimiles of all the quarto editions of the Shakespeare plays which ever were issued, and it is interesting to note that the first one, "The Troublesome Reign of King John," printed in 1591, is printed in the old black letter, whereas the next one, chronologically, his "Venus and Adonis," published in 1593, is in the modern type. This shows the transition to have been under way from 1591 to 1593, and goes a long way toward fixing the probable date of the Northumberland Manuscript.

This is the first time, so far as I know, that any reference to the Northumberland Manuscript has voluntarily issued from the Stratford camp. Of course, we Baconians are familiar with it, although it is not shown in the institutions of learning where the Shakespeare myth is upheld, and the majority of both teachers and pupils know absolutely nothing about it.

On one occasion, when I was scheduled to deliver an address on Shakespeare before a prominent institution of learning not a thousand miles from Philadelphia, I was told by the head of the institution: "You must not mention the Northumberland Manuscript. I am afraid of it."

MORE ON THE NORTHUMBERLAND MANUSCRIPT