Bacon & Shakespeare Manuscripts in One Portfolio! 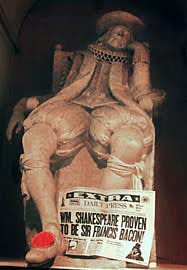 By far the most interesting Shakespearean document ever unearthed.-Williard Parker

In 1867 in Northumberland House a manuscript folder was discovered which at one time had been in Francis Bacon's possession. The folder contained a list with some of Bacon's well-known works along with two of the Shakespeare plays. (facsimile in modern script of the front cover page)

It is the only Elizabethan document that has both the names Shakespeare and Francis Bacon written together. The Northumberland Manuscript is a valuable contemporary document which, although somewhat damaged by a fire in old Northumberland House, survives to prove that "Shakespeare's" Manuscripts of Richard II and Richard III were once tied up in a portfolio with Francis Bacon's Conference of Pleasure, some speeches, Nash's Isle of Dogs and an old play that is lost. The fact remains that on the old parchment cover is written the names of Bacon and Shakespeare in the list of contents and scattered sentences from the Shakespeare plays including the unusual word from Love's Labour's Lost, honorificabilitudini. On the back side of the cover are the words "put into type."

A Letter of Francis Bacon's

Bacon speaks again and again of Richard II, and in a letter to the Earl of Devonshire, says:

" I remember an answer of mine in a manner which had some affinity* with my Lord's cause; which, though it grew from me, went after about in other's names; for her Majesty being mightily incensed with that book which dedicated to my Lord Essex, being a story of the first year of King Henry IV, thinking it a seditious prelude to put into the people's heads boldness and faction, said, she had an opinion there was treason in it, and asked me if I could not find any places in it that might be drawn with with case of treason......... And, another time, when the Queen could not be persuaded that it was his writing whose name was to it, but that it had some more mischievous author......said with great indignation that she would have him "racked to produce his author."

*{the prose work of Henry IV , ascribed to John Hayward, was to all intents and purposes, the life of Richard II. Only a small portion at the end is concerned with Henry IV, the main text with Richard.}

Bacon and the Queen regarding Richard II

In an early number of Baconiana, a writer showed that whole pages of The Annals of Tacitus were used in Richard II. The play was staged in 1597, during the Essex Rebellion and before , and Bacon, at the trial of Essex makes the cryptic remark: "It is said I gave in evidence mine own tales." All these indications point to Bacon's connection with Richard II.

Mr. Henry Seymour, in Baconiana, (December 1926) pointed out the extraordinary fact that this play was published anonymously in the first instance, and that only when the Queen was hunting for it's author to "rack" him, the new edition of 1598 was issued with the name of "William Shakespeare" as author! Was this the moment to print a real author's name upon it? It plainly shows that this name was but a pseudonym, that Bacon was the concealed author, and that his knowledge of its "cribbing" from Tacitus was an unconscious admission of the fact.

On the Northumberland manuscript can be seen the symbol of Pallas Athena the Spear-Shaker, the hand glass which also appears in one of Francis Bacon's well-known signatures.

It appears at the top of the page under the words 'Mr.ffrauncis Bacon of Tribute or giving what is dew.' The glyph that looks like a "6"laying on its side is a Rosicross symbol representing the mirror of Pallas Athena, which in the myth was used to capture Medusa. The mirror was a means of receiving and transmitting knowledge or wisdom by reflection. It was Bacon's secret symbol representing that he was Shake-speare, the representative of Pallas Athena the Spear-Shaker.

The following quotation from Bacon's Advancement of Learning and the Bible illustrates how he used the Knights symbol of the glass and mirrorWhence as Solomon declares,

"That the eye is not satisfied with seeing, nor the ear with hearing; so of knowledge itself he says, God hath made all things beautiful in their seasons; also he hath placed the world in man's heart; yet cannot man find out the work which God worketh from the beginning to the end; hereby declaring plainly that God has framed the mind like a glass, capable of the image of the universe, and desirous to receive it as the eye to receive the light; But if mankind were desirous to search after useful things,they aught attentively, minutely, and on set purpose, to view the workmanship and particular operations of nature, and be continually examining and casting about which of them may be transfered to arts; for nature is the mirror of art. For the mind, darkened by it's covering the body, is far from being a flat, equal, and clear mirror that receives and reflects the rays without mixture, but rather as a magical glass, full of superstitions and apparitions."

Generally academic Shakespeare "scholars" prefer not to mention this all important Northumberland Manuscript, as it clearly refers to the fact that both Bacon's and Shakespeare's names are so intimately connected. It is also generally accepted that two Shakespeare plays, Richard II and Richard III were removed from the manuscript, along with The Earl of Arundel's Letter to the Queen, Oration at Gray's Inn Revels, an address to the Queen by Francis Bacon, Essays by Bacon, Asmund and Cornelia (possible play), The Isle of Dogs, a play by Thomas Nashe and a portion of Leicester's Commonwealth all which were probably once in possession of it's original owner, Francis Bacon.

Howard Bridgewater, Barrister-at-Law, in part of his article for Baconiana (Spring 1948) called Documentary Evidence of Francis Bacon's Authorship of the Immortal Plays writes the following on the Northumberland Manuscript :

"Before furthur discussing this intriguing document, it is important that we should endeavor to fix the date of it. In the first place, the writing is in Elizabethan script, and internal evidence suggests that it was written before 1597, for the first edition of Bacon's Essays was published in that year, and having been put into print it is unlikely that anyone afterwards, more especially Bacon himself, would want to have copied out again in writing.
Rather significantly, of these Essays which had previously circulated in manuscript form, Bacon wrote in his Epistle Dedicatory to the first edition of them as follows :

"I doe nowe, like some that have an Orcharde ill neighboured, that gather their fruit before its ripe, to prevent stealing. These fragments of my conceite were going to print. Therefore I held it best discretion to publish them myselfe, as they passed long agoe from my pen."

The first significant thing about this folder of transcripts, mostly of Bacon's works, is that there is included in the list of contents two Shakespeare plays which are not described as by Shakespeare, though the Isle of Dogs is specifically attributed to Nashe, and Leicester's Commonwealth is entered as "author uncertain," or, to be strictly correct, "incerto autore."
The second and still more significant thing about it is that this list of contents on the cover is scribbled all over, especially at the foot of it with "your" and "yourself" in juxtaposition to the words "William Shakespeare," sometimes spelled "Shak" and sometimes without the "e" at the end. It is as though the writer of these scribblings, which were apparently made about the time when the "Shakespeare" plays were beginning to appear under that name, and not, as previously, anonymously, was, in the course of trying out a new pen, or perhaps just mischieviously scribbling, revealing his knowledge of the fact that William Shakespeare or Shakspere, however spelled, was merely a name which was being used by Bacon. This impression is very strongly supported by the fact immediately above the entries relating to Rychard the Second and "Rychard the Third" (where there was more space to interpolate it than there was below those entries) appears the phrase "By Mr. Ffrauncis William Shakespeare." And somewhat significantly, as it seems to me, there is written just above and to one side of the several repititions of the word "Shakespeare," towards the end of the page, the sentence, "Revealing day through every cranny peepes." That sentence, which will be recognized as being taken from The Rape of Lucrece, is followed by the words "and see Shak: your William Shakespeare," etc.
It certainly seems as though the writer of these scribblings, without saying so in so many words, is revealing the fact, of which I think he was a little proud, that whatever was generally thought about the matter, he, at any rate, was well aware that William Shakespeare was nothing but a name. It is curious that the very first document that we find on which the names of Shakespeare and Bacon appear in juxtaposition should be of such and extraordinary character. Absolute proof that Bacon, for the purpose of his plays, was "Shakespeare," the Northumberland Manuscript cannot pretend to be, but, though falling short of proof positive and unanswerable, it constitutes in more ways than one, documentary evidence connecting Francis Bacon with the plays, of an extremely illuminating character.
The chief point to remember, then, about this folder, which, according to the list of contents, should have, and probably at one time did contain two of the so-called "Shakespeare" Plays, is that someone, about 350 years ago, scribbled on it in such a way as to say, in effect, "You don't deceive me, my dear Mr. Francis Bacon, with your William Shakespeare pseudonymit's you yourself, Mr. Ffrauncis, who is the author of those plays! "