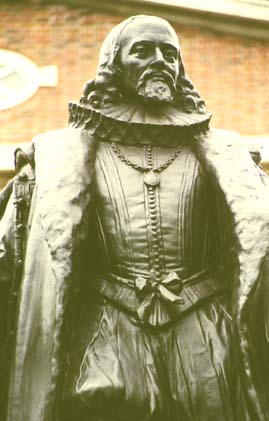 It may please your most excellent Majesty,

Time hath been when I have brought unto you gemitum columbae from others. Now I bring it from myself. I fly unto your Majesty with the wings of a dove,which once within these seven days I thought would have carried me to a higher flight.
When I enter into myself, I find not the materials of such a tempest as is comen upon me. I have been (as your Majesty knoweth best) never author of any immoderate counsel, but always desired to have things carried suavibus modis. I have been no avaricious oppressor of the people. I have been no haughty or intolerable or hateful man, in my conversation or carriage. I have inherited no hatred from my father, but am a good patriot born. Whence should this be? For these are the things that use to raise dislikes abroad.
For the House of Commons, I began my credit there, and now it must be the place of the sepulture thereof; yet this Parliament, upon the message touching religion, the old love revived, and they said I was the same man still, only honesty was turned into honour.
For the Upper House, even within these days before these troubles, they seemed as to take me into their arms, finding in me ingenuity which they took to be the true straight line of nobleness, without crooks or angles.
And for the briberies and gifts wherewith I am charged, when the books of hearts shall be opened, I hope I shall not be found to have the troubled fountain of a corrupt heart in a depraved habit of taking rewards to pervert justice; howsoever I may be frail, and partake of the abuse of the times.
And therefore I am resolved when I come to my answer, not to trick up my innocency (as I writ to the Lords) by cavillations or voidances, but to speak to them the language that my heart speaketh to me, in excusing, extenuating, or ingenious confessing; praying to God to give me the grace to see the bottom of my faults, and that no hardness of heart, do steal upon me, under shew of more neatness of conscience than is cause.
But not to trouble your Majesty longer, craving pardon for this long mourning letter; That which I thirst after as the hart after the streams, is that I may know by my matchless friend that presenteth to you this letter, your Majesty's heart (which is an abyssus of goodness, as I am abyssus of misery) towards me. I have been ever your man, and counted myself but an usufructuary of myself, the property being yours : and now making myself an oblation to do with me as best conduce to the honour of your justice, the honour of your mercy, and the use of your service, resting as clay in your Majesty's gracious hands.

Jean Overton Fuller writes in her bio on Bacon that :

"Francis had warned the [Duke of] Buckingham, on his coming in as [James'] Favourite, that to be near a Monarch was not without perils; for should the people be angered, the monarch might, to save himself, use one near to him to put the blame on. He had meant this as a warning to the beautiful boy; yet in a way, it cannot have been beyond his conception that it should be not the Favourite but himself who would be chosen for the sad role."

Thomas Bushell one of Francis Bacon's secretaries waited until after the deaths of Francis Bacon, James I, and his favourite, the highly contemptible, George Villiers (known as the Duke of Buckingham) to put on record for posterity what transpired :

........there arose complaints against his Lordship and the then Favourite at Court, that for some days the King was put to this quere, whether he should permit the Favourite of his affection or the oracle of his Council to sink in his service.
Whereupon his Lordship was sent for by the King, who, after some discourse, gave him this positive advice, to submit himself to the House of Peers, and that upon his princely word he would then restore him again....Now, although my Lord saw his approaching ruin, and told his Majesty there was little hope of mercy in a multitude, when his enemies were given fire, if he did not plead for himself, yet such was his obedience to him that he resolved his Majesty's will should be his only law, and so took leave of him with these words :
Those that strike at your Chancellor-it is much to be feared-will strike at your crown, and wished that as he was then the first so he might be the last of sacrifices.

see the Martyrdom of Francis Bacon

higher flight--- as a result of the sustained enquiries between 15 and 19 of March, Bacon fell seriously ill

enter into myself--- examine my conscience

usufructuary---a person who has the right of enjoying the use of and income from another's property without destroying, or damaging, or diminishing the property

(The phrases and their definitons can be found in Brian Vickers' book Francis Bacon : A Critical Edition of the Major Works)