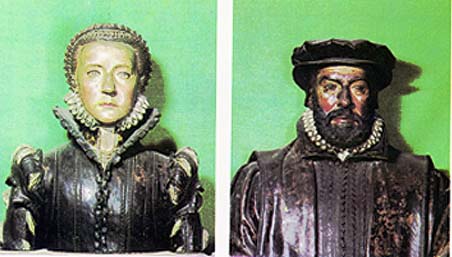 Sir Nicholas studied at Cambridge University's Corpus Christi College. From there he went on to Gray's Inn, one of the Inns of Court where talented and aspiring young gentlemen from Oxford and Cambridge learned law. It was also a sort of preparatory school for service in the royal court and in the administration of the government. He would go on to become Queen Elizabeth's Lord Chancellor, the highest legal postion of the land, an office that Francis would someday hold himself.

Lady Anne Bacon was the daughter of Sir Anthony Cooke, tutor to Queen Elizabeth's half-brother before he became Edward VI. She was a woman of keen intellect with strong Puritan views, although at all times a member of the Church of England. She was well trained in Latin and Greek and as the daughter of a royal tutor, she likely received the education he would have given a princess. This stimulating environment fostered the young Francis who would become a fluent genuis of languages.

The following is from Alfred Dodd's book,

"The Marriage of Elizabeth Tudor"1940

He is the reputed father of Francis Bacon but there is abundant evidence to prove that he was a foster-father only.

He was the Lord Keeper to Queen Elizabeth, a sound lawyer and a witty man, revelling in classic literature. He was also a writer. A book he published had the result of excluding him from the Privy Council. Henceforth he wrote anonymously. He not only saw the joy of writing a book but he learned the value of anonymity.....the use of a pen-name.

Sir Nicholas left an elaborate Will. All his children were well provided for, but Francis was left out entirely, thus indicating that his expectations lay elsewhere, which indeed they did, for he became a Gentleman-Pensioner of the Queen.

Judging by the portraits of Francis Bacon, Sir Nicholas and Lady Bacon, it is quite impossible for Sir Nicholas to have been the blood father of Francis. He is cast in an entirely different mould from his foster-parents.

Lady Anne Bacon was Sir Nicholas Bacon's second wife. She was the daughter of Sir Anthony Cooke, governor of Edward VI. The Cooke family were connected with Stratford, being large landowners. She was a perfect housewife, as well as being a very clever woman. She had been the tutor to the young King Edward. She had a strong character and her accomplishments were many and varied. She was familiar with classical languages. In her private letters she quotes Latin freely. In her twenty-second year she translated and published Ochines Sermons from the Italian. When Francis was two years old she translated from the original Latin, Bishop Jewels Apology for the Church of England. Her fame as a literary woman was such that Theodore Beza, years after this, dedicated to her his Meditations.

She was a deeply religious woman, strictly puritanical...."A very saint of God," says Francis Bacon in after years. The day started with family prayers and ended with stories of Classical Adventures, Morality Tales and the Ancient Myths. Her home shone with the beauty of holiness like a sanctuary in those dark days of intrigue, hypocrisy, corruption and vulgar debauchery.

Lady Bacon died in 1610, over eighty, "being a little better than frantic in her old age" says Bishop Goodman. She had been for years under the care of Francis Bacon.

Her goodness to him cannot be over-estimated. Her intellect and life were reflected in him in a variety of ways. She was his staunch friend and ally. She spent her money to assist him in his literary enterprises. She maintained the Queen's secret and acted the part of foster-mother with tact and discretion. She was the head Lady-in-Waiting to Queen Elizabeth when Francis was born.

This is amply proved by a letter written by Lady Bacon to Anthony. Francis had apparently been by something she had said or done or written, and so she writes to the elder (foster) brother, who apparently knows the real relationsip, to mollify Francis by explaining that he has misunderstood. In writing to Anthony she makes this remarkable statement.
(Explain to him):

"it is not my meaning to treat him as a ward: Such a word is far from my Motherly feeling for him. I mean to do him good."

Such a significant phrase reveals the real relationship of the parties. He was the ward of Lady and Sir Nicholas Bacon, not their son.

It is therefore quite consistent that Francis Bacon should write to Sir Toby Matthew, and refer to Anthony as his friend, not as his brother. He is speaking of having lost two dear friends. One he has lost "by absence." That was Matthew. The other by "death." He names him "Mr. Anthony Bacon." He did not call him "brother", but a friend in whom he could confide."

Similiarly in the Northumberland Manuscript he writes, "Anthony comfort and consort" but he did not write "brother." (A note by J. Edward Morgan, California) True, he signs the dedication of his Essays to Anthony, "Your entire loving brother," for they were brother-masons as well as foster brothers.

More on Francis and Sir Nicholas Bacon's Will

Sometime in February, 1579, Francis Bacon dreamt that Sir Nicholas Bacon's house was plastered over with black mortar, and he awoke with a feeling that something had happened to a member of the family. A few days later he learned that Sir Nicholas had died suddenly on the 20th of February. The psychic premonition is recalled years afterwards in the Sylva Sylvarum (1627) as worthy of record, an out-of-the-way fact of Nature demanding an explanation. A month later (20th of March) he is recalled to England from France bearing despatches and a letter from Sir Amyas Paulet in which Francis is spoken of as

being in good hope, endued with many and singular parts, and one who, if God gave him life, would prove a very able and sufficient subject to do her Highness good and acceptable service.(State Paper Office; French Correspondence).

In view of what we already know, he went direct to the Queen--the ambassador's letter providing an excuse for the interview--in an effort to ascertain what were his future prospects: Was he to take up his rightful place as her son or must he stil continue to masquerade as the son of the late Sir Nicholas? He was apparently told to go to Lady Bacon's home --she was living at York House, next door to the Palace-- and await developments.

Sir Nicholas Bacon had died a very wealthy man. The Queen had loaded him with money and presents. In December, only a few weeks prior to his death, he had made an elaborate Will, which, when read, disclosed that he had left large sums to his children by a first wife, and a sufficient income for Lady Anne and her son Anthony; but the name of Francis was not even mentioned. He was not left a solitary penny. Why? Because Francis was not his child. This significant and deliberate omission by a careful and astute lawyer tells the truth of the real parentage of Francis with more deadly emphasis than even his registration of birth as "MR. Franciscus Bacon." Sir Nicholas knew that the lad's prospects lay elsewhere, with the Queen herself, and he was not going to do anything to allow her to shirk her parental responsibility. She must provide for him. Sir Nicholas puposely left the lad nothing so as to force the Queen's hand and to leave her without an excuse for providing for him and recognizing her own son. On this very point, Parker Woodward, a solicitor, writes :

On the 12th December, 1578, Sir Nicholas Bacon who had been much enriched by the Queen had made an elaborate Will wherein he made full provision for his first family, his widow and his child Anthony, but left nothing whatever to Francis. He had three sons and three daughters. The Will may be seen at Somerset House. - Early Life, p. 18.

If it were not an actual fact that Francis was the Queen's son, is it not strange that neither Lady Bacon, nor Anthony, nor Francis, nor any member of the family expressed astonishment that Sir Nicholas Bacon's Will made no monetary provision for Francis? The truth is self-evident: He was not mentioned in the Will because he was not of the Bacon family. Even when Francis, many times afterwards, was desperately pressed for monies, he never once complained of harsh financial treatment or neglect by his "father." He always speaks of Sir Nicholas with respect and love, there being a bond between them which was never once broken by a quarrel. The complaints of Francis in his correspondence are always directed against the Queen and her Ministers. The reason is clear : Francis knew he had not the slightest claim as a son on the estate of Sir Nicholas or on the Bacon Family, and that all his future was bound up with the Queen's WILL. She was the only person to whom he could turn for financial assistance.

Imagine the feelings that swept over him as he crossed the threshold of York House for the first time after his three years' Continental travel; and his thoughts as he waited night after night for some message from the Queen....the message that would announce his recognition......the message that never came. Sir Nicholas death and his lack of a monetary allowance had created a crisis in his affairs. His thoughts would race on: the Queen must acknowledge him, must provide for him, he must be allowed to take up his proper position in the state. He had the right to stand next to the Throne. Why shouldn't he? How could he enforce his claim? He was in a situation of grave perplexity. Later he was to cry out to the Queen in his agony of mind:

I see you withdraw your favour from me, and now I have lost many friends for your sake: I shall lose you, too. You have put me like one of those that the Frenchmen call Enfans perdu...(lost children); so have you put me into matters of envy without Place or without Strength.--Francis Bacon to Queen Elizabeth, "Apologia."

Could anything be told more directly? Francis Bacon was indeed a "Lost Child," lost, concealed purposely from the world.

Perplexity and bewilderment that had dogged him like silent ghosts through the joyous days of Paris and Navarre, now stood before him waiting like mendicants for his decision. They waited and they would not go away nor be gainsaid. At last they bred within him that fierce irresolution that found so powerful an expression in Hamlet.....the Prince who could not succeed to his father's Throne, any more than Francis could succeed to Elizabeth's .....Hamlet who lived on the sword-edge of a balance not knowing what to do for the best....to wait, wait, or to act.