From the National Encyclopedia of American Biography 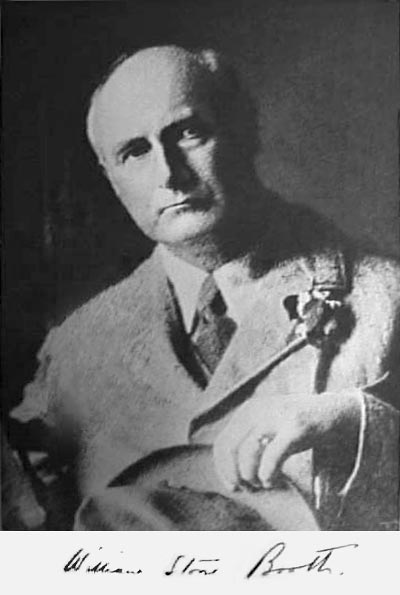 BOOTH, William Stone, author, was born in Gloucester, England, Jan. 20, 1864, son of Abraham and Elizabeth (Watts) Booth. His father was an importer of fine lumber from Russia and Australia and his paternal great-grandfather, William Stone of Chatham, Chief Constructor of the British Navy, designed and built Nelson's flagship, "Victory" and other noted vessels. He was prepared for Oxford under private tutors and at the Cathedral College School in Gloucester, but ill-health prevented his entering the university. In 1885 he went to Australia in a sailing vessel to benefit his health and to further his father's lumber interests. Afterwards he traveled for three years in Brazil, Mexico, the West Indies and the United States, investigating the fibre industry, and returned in 1890 to the lumber business in London. In 1893 he came to the United States, spent a year in California, and then settled in the East. In 1894-97, he was a branch librarian of the New York public library. Thereafter Mr. Booth served as literary adviser to leading publishers, including G. P. Putnam's Sons (1897), the Macmillan Company (1898-1903), and then became a literary adviser and editor on his own account. During the World war period he labored for the Red Cross and in translating and summarizing medical treatises for the Psychopathic Hospital of Boston. As an author his favorite field was the literature and drama of the Elizaethan and Jacobean periods, especially the plays of Shakespeare and their authorship. On this subject he wrote Some Acrostic Signatures of Francis Bacon (1909), The Hidden Signatures of Francesco Colonna and Francis Bacon (1910); The Droeshout Portrait of William Shakespeare, an Experiment in Identification, (1911); Marginal Acrostics and Other Alphabetical Devices, a Catalogue (1920) and Subtle Shining Secrecies, Writ in the Margents of Books (1925). In these works he submitted new evidence and arguments on the Bacon-Shakespeare controversy, but his exhaustive knowledge and judgment prevented his espousal of the opinions of the extremists on either side. In his last-named book, dedicated "To the Inquisition of Truth," he drew the conclusion that the great plays were written not by Shakespeare the Actor, but by Shake-speare the Poet, the pen-name of Francis Bacon. He also wrote A Practical Guide for Authors and Playwrights (1907), and compiled and edited On Many Seas and Wonderful Escapes of Americans, each a collection of stories based on actual experiences. He was intimately acquainted with French and Italian as well as English literature. To his life-work Mr. Booth brought a scholarly equipment of wide range, a keen and open intellect, great enthusiasm, sanity and a trenchant individuality. He was of commanding physique, a picturesque and luminous talker, an incomparable letter writer, and an investigator of unflagging patience and courage. He was married (1) Oct. 1, 1897, to Mary, daughter of Elder Truman Brewster of Montrose, Pa.; (2) Nov. 29, 1904, his first wife dying in 1901, to Leonora, daughter of Maj.-Gen. Albion P. Howe, U.S.A., of Cambridge, Mass. He was the father of two daughters, Elizabeth McPherson and Emily Booth, and of one son, Robert Howe Booth. Mr. Booth died in Cambridge, Mass., Oct. 14, 1926.