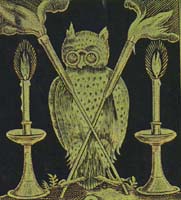 When icicles hang by the wall
And Dick the shepherd blows his nail
And Tom bears logs into the hall
And milk comes frozen home in pail,
When blood is nipp'd and ways be foul,
Then nightly sings the staring owl,
Tu-whit;

When all aloud the wind doth blow
And coughing drowns the parson's saw
And birds sit brooding in the snow
And Marion's nose looks red and raw,
When roasted crabs hiss in the bowl,
Then nightly sings the staring owl,
Tu-whit;

The above poem raises the question, about which considerable difference of opinion exists, as to why the owl's cry, usually considered to be a mournful note, should be regarded by the author of the poem as a "merry note." The answer is to be found, I think, in the following prognostication regarding weather which Francis Bacon has recorded, together with many others, in Historia Ventorum (The History of the Winds).

(71) "The whooping of an owl was thought by the ancients to betoken a change of weather, from fair to wet, or from wet to fair. But with us an owl, when it whoops clearly and freely, generally shows fair weather, especially in winter."

The "Tu whit; Tu-who" of the poem thus gladdens the heart of the poet, because it indicates a forthcoming and welcome break in the dreary winter prospect which is so vividly described.  — Harold N. Thomas in a letter to Baconiana December 1958

Francis Bacon's The History of the Winds