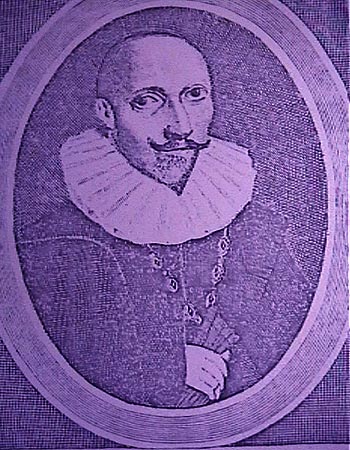 Sir Tobie Matthew
Frontispiece to the Collection of Letters, 1660.

Tobie Matthew was so close to Bacon that Bacon in a letter called him "another myself."

English priest, born at Salisbury, 3 October, 1577, died at Ghent, 13 October, 1655. He was the son of Dr. Tobie Matthew, then Dean of Christ Church, Oxford, afterwards Anglican Bishop of Durham, and finally Archbishop of York, and Frances, daughter of William Barlow, Anglican Bishop of Chichester. Tobie Matthew matriculated from Christ Church, Oxford, 13 March, 1589-90, and became M.A. 5 July, 1597. He seems to have been harshly treated by his parents, who were angered at his youthful extravagance. On 15 May, 1599, he was admitted at Gray's Inn, where he began his close intimacy with Sir Francis Bacon, and two years later became M.P. for Newport, Cornwall. During this period of his life he frequented the dissolute court of Elizabeth. On the accession of James I he sat in Parliament for St. Alban's, and joined the new court, receiving a large grant from the Crown which amply provided for his future. Having always desired to travel, he left England in November, 1604, visiting France on his way to Florence, though he had promised his father he would not go to Italy. At Florence he came into the society of several Catholics and ended by being received into the Church. A new persecution was raging in England, but he determined to return. He was imprisoned in the Fleet for six months, and every effort was made to shake his resolution. Finally he was allowed to leave England, and he travelled in Flanders and Spain. In 1614 he studied for the priesthood at Rome and was ordained by Cardinal Bellarmine (20 May). The king allowed him to return to England in 1617, and he stayed for a time with Bacon whose essays he translated into Italian. From 1619 to 1622 he was again exiled, but on his return was favourably received by the king, and acted as an agent at court to promote the marriage of Prince Charles with the Spanish Infanta. In the same cause James sent him to Madrid and on his return knighted him, 20 Oct., 1623. During the reign of Charles I he remained in high favour at court where he laboured indefatigably for the Catholic cause. When the Civil War broke out in 1640 he, now an old man, took refuge with the English Jesuits at their house at Ghent, where he died. He was always an ardent supporter of the Jesuits. and. though it has long been denied that he was ever himself a Jesuit, papers recently discovered at Oulton Abbey show strong reason for supposing that he was in fact a member of the Society. Besides the Italian version of Bacon's "Essays", he translated St. Augustine's "Confessions" (1620), the Life of St. Teresa written by herself (1623), and Father Arias's "Treatise of Patience" (1650). His original works were: "A Relation of the death of Troilo Severe, Baron of Rome" (1620); "A Missive of Consolation sent from Flanders to the Catholics of England" (1647): "A True Historical Relation of the Conversion of Sir Tobie Matthew to the Holie Catholic Faith" (first published in 1904), some manuscript works (see Gillow, " Bibl. Dict. Eng. Cath.", IV, 541-42). His letters were edited by Dr. John Donne in 1660.

Transcribed by Ernie Stefanik  for The Catholic Encyclopedia, Volume X

In a letter written in 1623, Bacon's confidant Sir Tobie Mathew, writing from the Continent stated :

"The most prodigious wit that I knew of my nation, and of this side of the sea, is of your Lordship's name, though he be known by another."

"And truly I have known a great number whom I much value, many whom I admire, but none who hath so astonished me and, as it were, ravished my senses, to see so many and so great parts which in other men were wont to be incompatible, united, and in that eminent degree in one sole person. I know not whether this truth will find easy belief.....The matter I report is so well understood in England, that every man knows and acknowledges as much, nay hath been an eye and ear witness whereof; nor if I should expatiate upon this subject, should I be held a flatterer, but rather a suffragan to truth......
Praise is not confined to the qualities of his intellect, but applies as well to those which are matters of the heart, the will and moral virtue; being a man both sweet in his ways and coversation, grave in his judgments, invariable in his fortunes, splendid in his expenses, a friend unalterable to his friends, an enemy to no man, a most indefatigable servant to the King, and a most earnest lover of the Public, having all the thoughts of that large heart of his set upon adorning the age in which he lives, and benefiting, as far as possible, the whole human race. And I can truly say (having had the honour to know him for many years as well when he was in his lesser fortunes as now he stands at the top and in the full flower of his greatness) that I never yet saw any trace in him of a vindictive mind, whatever injury was done to him, nor ever heard him utter a word to any man's disadvantage which seemed to proceed from personal feelings against the man, but only (and that too very seldom) from judgment made of him in cold blood. It is not his greatness that I admire, but his virtue; it is not the favours I have received from him (infinite though they be) that have thus enthralled and enchained my heart, but his whole life and character; which are such that, if he were of an inferior condition I could not honour him the less, and if he were my enemy I should not the less love and endeavour to serve him."

Tobie Matthew, Preface to his Collection of Letters, 1660, in Tribute to his friend Francis Bacon :

It will go near to pose any other nation of Europe, to muster out in any age, four men, who in so many respects should excel four such as we are able to show them : Cardinal Wolsey, Sir Thomas Moore, Sir Philip Sidney and Sir Francis Bacon. The fourth was a creature of incomparable abilities of mind, of a sharp and catching apprehension, large and faithful memory, plentiful and sprouting invention, deep and solid judgment,for as usch as might concern the understanding part. A man so rare in knowledge, of so many several kinds endued with the facility and felicity of expressing it in all so elegant, significant, so abundant, and yet so choice and ravishing a way of words, of metaphors and allusions as, perhaps, the world hath not seen, since it was a world.

In his letters to Bacon, Tobie Matthews cites two of the Plays, (Julius Caesar and Measure for Measure) indicating that Bacon had wrote these works. Bacon to Matthew, 1608, alluding to the "Felicity of Elizabeth": which he had submitted to him:

"At that time methought , you were more willing to hear Julius Caesar than Elizabeth commended";

and again Matthew in a letter to Bacon respecting some work he had received from him :

"I will not return you weight for weight but Measure for Measure."

"As anyone can plainly see who makes a careful examination of the first full page of text in the 1623 Shakespeare First Folio there is a message :

spelled out with the first letters of the respective lines:

T Then Prospero, Mafter of a full poore cell,

A And thy no greater Father.

D Did neuer medle with my thoughts.

I I fshould informe thee farther: Lend thy hand

A And plucke my Magick garment from me: So,

T The very vertue of compaffion in thee:

I I haue with fuch prouifion in mine ART

S So fafely ordered, that there is no foule

N No not fo much perdition as an hayre

B Betid to any creature in the veffell

W Which thou heardft cry, which thou faw'st finke: Sit

B Begun to tell me what I am, but ftopt

A And left me toa booteleffe inquisition,

CON Concluding, ftay, not yet.

OBEY Obey, and be attentiue.

Tobey, or Tobie Matthew (the spelling was quite plastic in those days), was Bacon's closest companion who played an important, although subordinate role in carrying out Bacon's designs. He was so close to Bacon that Bacon called him "another myself", and, in a letter to Conde Gondomar said, "Profection domini Tobiae Matthaei, qui mihi est tanquam alter ego.." And this is brought out in the message in the Folio. In the Folio there are two columns of text on each page, and the column next to the signatures adds to the message:

If Matthew was Bacon's alter ego then they must, indeed, have been "two alike."

Actually there is still more to the message. Reading across one finds another word added in the first column on page 3:

The added word "banito" is Italian and means banished. So now we have the message : F. Bacon, Tobey, Two Alike, banished.

That is applies to Tobey Matthew is well known. While he was on the continent he became converted to Catholicism, and when he returned to England he felt that the oath of allegiance to King James contained clauses which conflicted with his faith. Therefore he refused to take the oath, and, as a result, was banished from England in 1608.There is nothing on the surface to indicate "banished" applies to Bacon. However, Baconians have long claimed exactly this. They claim Bacon was the son of Queen Elizabeth, and due to her refusal to acknowledge this, was banished from his rightful heritage as king of England.This message raises two questions. First, could such a message occur as a result of chance? Second, if the message was not the result of chance, what does it mean?

As for the first question, the odds against the possibility of such a message occurring accidently can easily be calculated. This calculation reveals that Stratfordian Conventionalism may well be the greatest liberty that man has ever taken with the truth. The profile of the calculation is as follows: In "The Shakespearean Ciphers Examined", William Friedman, the renowned cipher 'expert', provided a frequency table showing the number of times each letter of the alphabet occurs per 1000 lines at the beginning of each line in the First Folio. With this it is easy to calculate the odds against the message resulting from chance. The result of such a calculation is:

against the probability of this message having resulted from random chance. Friedman laid down the following criteria to guide the searcher,"..if the plain text message makes sense", he said, " if the chances of it appearing by accident are one in one thousand million, his confidence in the solution will be more than justified." Therefore, in considering the message chance cannot be."