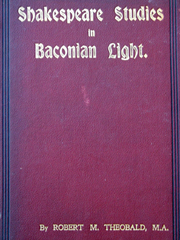 originally appeared in
(The Journal of the Bacon Society)

Bacon's Essay of Adversity was not published till the last complete edition of the essays appeared in 1625. It is one most often quoted as a specimen of his riches and most poetic style. Macaulay uses it to justify his criticism that Bacon's poetic fancies became more ample and exuberant as he grew older. The following passage occurs in it :

" Certainly, if miracles be the command over nature, they appear most in adversity:" --a short sentence, but one full of condensed wisdom.

Notice in it two things :--

Here we find the philosophical or abstract sentiment. For a concrete illustration of the same we may turn to King Lear. In the second scene of the second act, Kent appears before Gloster's Castle. It is night.
He has beaten the steward who had been insolent to the king. Regan and Cornwall appear. They overpower him and put him in the stocks, and leave him there for the night. He is now in the deepest pit of adversity; far from his friends; in the power of his enemies, who are likely to torture or kill him as soon as morning comes, and he is taken out of stocks. The situation would seem to justify the most utter despondency. But Kent rises above the situation. He had before said to the steward :

Though it be night, yet the moon shines;"

and now by it's light, which he calmly salutes as "comfortable beams," he reads a letter. He is astonished at his own almost miraculous composure, and soon, after falls asleep. It is a miracle of command over nature; and so he regards it; for he meditatively exclaims :--

"Nothing almost sees miracles
But misery."

Showing that (1) Bacon's definition of a miracle and (2) Bacon's philosophy of adversity, were both in his mind, although he does not expressly formulate them. The sentence stands is sybilline, and somewhat obscure. We cannot find a complete clue to Kent's meaning till we bring Bacon's Essay to help out the significance of it. And the reflection is so subtle and original that it must have come from the same mind that wrote the Essay; which, observe, was published 17 years after the 4to. edition of the play, and 9 years after Shakspere's death.
But this does not complete the curious significance of this passage. King Lear was published in 4to. in 1608. In the early edition the same passage occurs, but in such a mutilated form that no conjecture, however sagacious, could ever have extracted the right reading material from words which, even when amended, are rather enigmatical. The 4to. has :

"Nothing almost sees my wracke
But misery."

This is almost nonsense. If " my wracke" is taken as the nominative to the verb sees in an inverted sentence--my wrecked state sees only misery before it--this is exactly what Kent does not wish to express. For his whole behaviour, his sense of the "comfortable" quality of the moonlight, his reading the letter by its imperfect light, and then going to sleep, shows that his mind is not occupied by his misery, but by the strange faculty of ignoring it which possesses him. My wracke is evidently a corruption of miracle. Who but the author could have supplied the emendation? At no time could a transcendentalism of this character--a piece of mystic philosophy-- have been "floating in the air."

The ready explanation of tihs will be that the 4to. was a surreptitious copy obtained from a shorthand-writer's notes, and that the 1623 folio was printed from the author's own MS. Those who can be satisfied with this account of the genesis of the 4to. are welcome to their theory. To me it appears in the highest degree artificial and improbable. We know, however, from the peculiarities of the Northumberland MS., that Bacon was in the habit of dictating to an amanuensis. It is certainly possible that Lear was so dictated for the 4to. edition. The mechanical clerk heard the word miracle, and did not rightly catch the word. The error was not detected and remained uncorrected till the 1623 edition was published.

The interpretation of this passage, which is suggested by the passage from Bacon's Essay, will, I think, commend itself to every thoughful reader. It is obviously right. But it is not the interpretation which commentators suggest. One of them paraphrases the passage thus

" It is only when things are at their worst that Providence interposes with a miracle;"

a far more common-place sentiment, and one also which does exactly fit the words. For there is in them a profound reference to the vision which adversity sees, and which remains as a secret to itself. The rescue by miracle here referred to is seen only by the subject of it.

I may give another brief illustration derived from Francis Bacon, which could not easily come from any other source. In Othello, Iago gives a cynical definition of love (Othello, Il, iii., 339). He calls it "merely a lust of the blood, and a permission of the will." I have seen no satisfactory explanation of permission of the will. It is evidently an echo of Bacon's Latin. He constantly speaks of intellectus sibi permissus : the mind left to itself, uncontrolled, free to work out it's own cobweb theories without the restraint of facts. So Iago says love is voluntas sibi permissa : the will run wild, left to its own ungoverned impulses without the restraint of any regulative forces. Commentators have usually passed by these words without explanation. One accomplished Shakespeare student however writes to me as follows :--

"Iago's description of love in this passage does not appear to me either obscure, or suprising, in his mouth. It is, he says, only a surging of the blood, permitted (or coloured) by the will."

This explanation, besides being very forced, appears to me psychologically mistaken. The two clauses--it is a lust of the blood; it is a permission of the will--do not modify one another; the second is not a limitation of the first. On the contrary they are in apposition, and the idea of lawlessness which is implied in the first clause is expressly added with heightened emphasis in the second. When the blood is on fire, the will is not standing by giving its passive consent or formal approval. Both are equally unrestrained, and the function of the will, to put limits on natural impulse, is abandoned. Voluntas sibi permissa : the will is let loose, and the "child of wrath" ( or impulse) acknowledges no master, but rushes madly in pursuit of its object. There is a technical use of the Latin word permisso, found in Quintilan, and referred to in White and Riddle's large dictionary, implying a condition "by which a thing is committed to the decision of one's opponent." This is exactly the sense that may be intended in Iago's cynical discourse.

The same speech contains another Anglicised Latin word of analagous formation, perdurable. In both cases the particle per is intensive. Per-durable is exceedingly duarble. Permission implies that the subject of the word is not only missus, sent off; but permissus, exceedingly sent off.
Whether this passage is a reflection of Bacon's Latin phrase or not it certainly illustrates the fact that the poet had Latin phrases at easy command. The Latin word permissio, meaning complete surrender, could not easily be thus except by one accustomed to think and write in Latin. The cognate word permit is sometimes used by later writers in a somewhat similar way; but I have found no such use of the word permission as equivalent to abnegation, surrender.

The following passage from a letter written by Bacon to Tobie Matthew, February 28, 1621, soon after his fall , has singular affinities with passages in Shakespeare :

"In this solitude of friends, which is the (1) base-court of adversity, where almost nobody will be seen stirring, I have often remembered a saying my Lord Ambassador of Spain, (2) Amor san fin, no tienne fin [Love without end has no end]. --Life VII., 335

(1) Northumberland.
My Lord, in the base-court he doth attend.
To speak with you; may it please you to come down.
King

This is evidently a variation on the Spanish proverb. In logical language, end and reason are identical, and it is easy to understand how Bacon's "nimble mind" effected the transformation.

See portions of the Book : Shakespeare Studies in Baconian Light