of the terminal letters "s" in each word. Reading from left to right the words are :

The first two words and the last word in this line were cut form the halftone enlargement of the "Sir Thomas More" manuscript. The third word (his) was cut from a facsimile reproduction of a portion of Bacon's "Promus." The fourth word (his) was cut from a facsimile reproduction of an essay by Bacon entitled "The Praise of the Worthiest Vertue." The fifth word (this) was cut from a reproduction of a page of a Bacon manuscript "The Praise of the Worthiest Person." The sixth word (as) was cut from a photograph of an autograph letter signed by Bacon. The last word in the line 14, as stated above, was cut from the "Sir Thomas More" manuscript. Note the graceful contour of the small letter "s" made by a single stroke to the right forming a loop, and an easy, slight curve toward the left, at the top, terminating with a dot. In the words "this," first three words in line 2, are found additional examples of this singularity formed terminal letter "s." 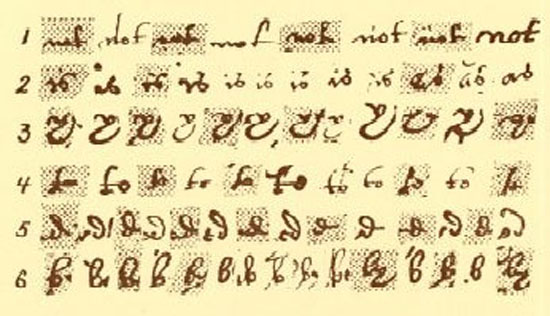 The size of the letters in the specimens shown above are of no particular significance; the bredth of the lines merely indicate that a different quill, stylus or other instrument was used when writing at different times. The tell-tale evidence is the identical form, the perpendicularity, cross marks, detached letters and syllables and other individual traits plainly discernable throughout the script reproduced in this pamphlet.

In lines 1 and 4 there are nineteen specimens of the letter "t" equal in height; with few exceptions the stems are perpendicular; all are crooked at the top and crossed by a horizontal line in the centre and at the base in the same manner. Observe that in each of the eight specimens of the word "not" in line No. 1, the letter "t" is a detached or separate character, a peculiarity of the handwriting of Francis Bacn that has been commented upon by noted experts.

Line 2 shows nine examples of the word "is", so near alike that lengthy analysis is unnecessary. The short up stroke in the letter "i" and the stereotyped form of Bacon's terminal letter "s" will be instantly recognized. The words "as," three last words in line 2, are additional illustration of the curious letter "s," and of the letter "a" open at the top.

Line 2 shows twelve specimens of the small letter "y", so uniform in their construction that comment is unnecessary. This line contains six "y's" photographed from the \ manuscript said by so called experts to be in the handwriting of Will Shakespeare, and six "y's" known to have been written by Francis Bacon.

Does this evidence carry conviction to the minds of students? Does the writer possess fertile imagination?Are we afflicted by defective eyesight? Line 4 contains eleven examples of the word "to", identical in construction and in the joining of the letters.The perpendicular stem is crossed and joined to the letter "o" at the same height and in the same manner in each case.