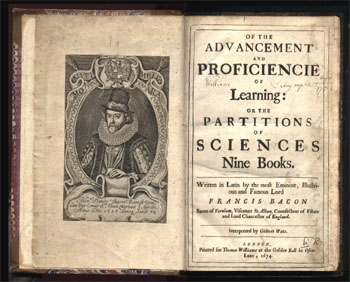 Here are two letters from William Smedley, author of The Mystery of Francis Bacon and a great collector of Bacon's personal library . Smedley corresponded with the San Francisco antiquarian John Howell. In these letters Smedley raises concern about the future of his Bacon book collection and that it might be best for it to be relocated to America. Unfortunately from what we now know, most of his collection was obtained by the Folger-Shakespeare Library in Washington D.C. whose policy makes these rare books unavailable to the general public. However, his letters can be found today in the N.Y.Public Library which are available to the general public under Reference : The Catalogue of the Smedley Library of Shakespearana and Baconia.-Lawrence Gerald

My daughter who is at present in San Francisco has suggested to me that I should send you a copy of a little book which I published some time ago entitled "The Mystery of Francis Bacon". It is crude an was hurriedly published by me in order to establish my title to many minor discoveries which I had made in connection with the literature of the period. I always talk freely to my friends about any new feature which I may come across and this course sometimes leads to one's work being unintentionally appropriated by others. Anyway as I understand from my daughter that you are interested in what is termed the Bacon-Shakespeare controversy, if you have not already seen the book some new aspects of the subject may be opened up to you.

It is a great misfortune that the question of Bacon's connection with the literature produced during his period was raised by the attribution to him of the authorship of the Shakespeare plays. On that point I have unpublished evidence which I believe definitely settles the point at issue, but the time for its publication is not yet. I allude to the discoveries of Mr. E. V. Tanner referred to page 125 of my book.

The real problem is how the literature of the period came to be produced. This literature is practically unknown except to second hand book dealers and book collectors and few of these have attempted any investigation or comparison of the contents of the volumes. Professors of literature, at any rate in this country, are profoundly ignorant of even the existence of some of the most important works. Whenever the facts come to be recognized the world will experience a greater surprise than has ever been experienced.

I am also sending you a copy of a little pamphlet which I published on Francis Bacon. I may say that for the last eight years I have edited Baconiana for the Bacon Society but this I am now relinguishing.

My library contains some 400 or 500 books with Bacon's marginal notes in them. The earliest writing which I have of his I place at the time when he was about 8 or ten years old. The notes are a accompanied by drawings from the pen of a very young boy.

I wish that a fitting memorial library could be established in the U.S. Bacon was instrumental in the earliest attempts at English colonization there and I venture to believe that if he could be consulted, it would be fully in accordance with his views that inthe country, the greatness of which he foresaw, his fame should be adequately commemorated. My suggestion for a suitable Bacon Memorial you will see at the end of the pamphlet. I could obtain for this purpose at least 2000 books containing Bacon's handwriting.

The war has so much interfered with my resources that I am compelled to abstain from book buying except on very special occasions. Since it began I was fortunate in securing the original author's manuscript of Barclay's Argenis as published in Latin in 1621 at Paris. This is in Bacon's handwriting.

I do not know whether you have seen the facsimile reproduction of the Bordeaux copy of the 1588 edition of Montaigne's Essay. I send you also a copy of the Baconiana which contains a short notice of it from my pen.

I shall be very pleased to learn how far you are interested in what I have written.

Your letter of the 7th reached me today. That of the 15th of June also came to hand and I acknowledged it and returned you my sincere thanks for your great kindness in sending , me the photographs and interesting information which accompanied your letter, I have a copy of the 1605 Advancement of Learning with marginal notes in Bacon's handwriting. I know quite well, the trefoil mark which I see on your photographs; Ben Jonson also used this mark. I have a copy of the 1629 Advancement and the 1629 Essays bound together with his marginal notes. The title page of this book bears the signature of John Dalton of the Atomic Theory fame. I have Martin Luther's writing and signature in a book with Bacon's annotations. A still more curious combination is that of Aldus Manutius and Baconia. I am sure about the latter's handwriting in it but although it contains a signature "Aldus Manutius" I have no means of verifying the writing. That of Luther, to which I referred, is I think beyond question.

I have about 3000 books constituting what I call my Bacon-Shakespeare library. About 1000 are comparatively modern and refer to Shakespeare literature. I have endeavoured to obtain a copy of every edtion in every language of works by Bacon and these run into some hundreds but they do not include the 1597, 1598, or 1606 Essays or the translation of the Psalms. Amongst the English editions I think there is very little else missing. The collection of French editions is extremely good, all the earlier ones being there. The collection of editions published on the continent, all in Latin at Amsterdam, Leydon, etc., in the second half of the 17th century, is probably complete. Lives of Bacon and books on his works form another section. Then there are several hundered volumes published between 1572 and 1638 in England and France with the production of which I am convinced he was concerned. I have a wonderful collection of Barclay's Argenis and the author's original manuscript full of alterations, poetry, poetry substituted for prose, etc., as it was printed in 1621. This is in Bacon's handwriting. I have all editions of the French Academy published in France and England except the first 1579. I live in hopes of someday possessing this.

But the chief value lies in Bacon's manuscripts and annotated books. There are some of his youth's scribblings -common books-a Genealogy of Scottish Noblemen in 1602 nearly all in his handwriting-a sideboard which belonged to him and which never left the Gorhambury Estate until it came to my hands-a marvellous manuscript on Canon Law, a huge bulky volume, and other interesting manuscripts in his handwriting. Then there are some 300 or 400 books with his marginal notes. His brief, with drawings in the margins and most copious notes, scores of books which I believe he read and wrote in before he was 12 years of age. About 100 of the books are Incanabula, some very rare. I omitted to mention when speaking of the books published between 1572 and 1638 the section of emblem books which is excellent-some of these contain his handwriting. In the Shakespeareana there is a complete ( I believe) collection of W.H. Ireland's Works.

Now I am not seeking a sale of my library but I don't want to see it broken up (of course I shouldn't see it) after my death which must come some day. I should therefore be glad to know that it was deposited in the Library of some College or Institution where the scheme I have been working on would be perfected after I have passed away. I can't afford to give it as a memorial to Bacon or I should refuse an offer of 2500 simply because I don't want them to be dispersed. The Library is unique and I should want a substantial sum if I sold. I said it is unique but there is another collection which I could obtain to go with it very similar in character to mine containing some priceless books on account of the marginal ntoes. The two collections are intended to be united and they should be. I don't know how clear I have made my meaning or whether you can grasp the position from my letter but at any rate it will suffice to give you a general idea of what we are talking about. Perhaps you will let me have your views.

I am so utterly ashamed of the treatment that English literary men have extended to Bacon that I should be glad to see my books go to America and know that the most suitable memorial was to be found there. I am afraid this is unpatriotic but the English deserve to lose every pleasure connected with the author of the Shakespeare plays and the translation of the Bible, or rather the authorized version in the early editions of which I am rich.

Again thanking you for your letters and for the photographs and printed matter you sent me.

There is also a section of controversial literature-very comprehensive.

THE MYSTERY OF FRANCIS BACON