From America's Assignment with Destiny

excerpt from the chapter: The Colonizaton Scheme II

Sir Walter Raleigh, a distinguished member of the Baconian circle, made the mistake of confiding his private plans for his South American expedition to the King. James promised to keep the secret with his honor, but hastened to whisper it in the ear of Count Gondomar. The Spanish, properly forewarned, had a strong force waiting for Raleigh at the mouth of the Orinoko, and in the fighting that followed, Raleigh's son was killed. 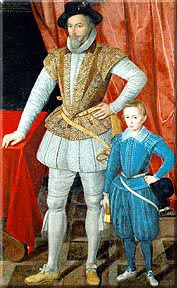 James, who was to blame for the whole sorry business, promised Gondomar that Raleigh would be publicly executed, but even the popular account of the knight's death is false. Under such conditions, it would have been madness to preserve the papers of any significant political project. That which was intentionally concealed, even from the records of State, cannot be easily be recovered after so long a time. It was an axiom of that day that a wise man was like a trunk with a double bottom-- when first opened, the trunk must seem to be empty. Only those of kindred spirit could know that a man's character had a secret compartment.

"We learn incidentally from one of Bacon's apothegms that soon after he became Lord Keeper (which would be shortly before Raleigh sailed) , he had a long conversation with him at Gray's Inn walks. We are not told what the subject was, but it must have been interesting and was probably important, for it was that he kept the Earl of Exeter so long upstairs." (The Life and Times of Francis Bacon, Spedding)

Bacon visited Raleigh during his imprisonment, and the friendship between the two men was sufficiently founded upon previous efforts which Bacon had made to cement a genuine alliance between Raleigh and the unfortunate Earl of Essex. Ben Johnson acted as intermediary and agent extraordinary on several occasions. It will be remembered that Jonson was at Stratford on that festive evening{April 23, 1616} which is said to have contributed to the "Bard's" demise. If Shakespeare had small Latin and less Greek , it is unlikely that Raleigh had more Hebrew. The first edition of The History of the World is ebellished with numerous emblems and devices belonging to the Baconian group. The title page has been a subject of controversy for centuries. Ben Jonson, referring to Sir Walter Raleigh, told Drummond : "The best wits in England were employed in making his history."

History Of The World 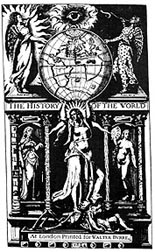 From Ralegh’s History of the World.

What was the mysterious knowledge which Sir Walter Ralegh possessed and which was declared to be detrimental to the British government? Why was he executed when the charges against him could not be proved? Was he a member of one of those feared and hated secret societies which nearly overthrew political and religious Europe during the sixteenth and seventeenth centuries? Was Sir Walter Ralegh an important factor in the Bacon-Shakspere-Rosicrucian-Masonic enigma?

By those seeking the keys to this great controversy, he seems to have been almost entirely overlooked. His contemporaries are unanimous in their praise of his remarkable intellect, and he has long been considered one of Britain’s most brilliant sons.

Sir Walter Ralegh—soldier, courtier, statesman, writer, poet, philosopher, and explorer—was a scintillating figure at the court of Queen Elizabeth. Upon this same man, King James—after the death of Elizabeth—heaped every indignity within his power. The cowardly James, who shuddered at the mention of weapons and cried like a child when he was crossed, was insanely jealous of the brilliant courtier. Ralegh’s enemies, playing upon the King’s weakness, did not cease their relentless persecution until Ralegh had been hanged and his decapitated, quartered, and disemboweled body lay at their feet.

The title page reproduced above was used by Ralegh’s political foes as a powerful weapon against him. They convinced James I that the face of the central figure upholding the globe was a caricature of his own, and the enraged king ordered every copy of the engraving destroyed. But a few copies escaped the royal wrath; consequently the plate is extremely rare. The engraving is a mass of Rosicrucian and Masonic symbols, and the figures on the columns in all probability conceal a cryptogram. More significant still is the fact that on the page facing this plate is a headpiece identical with that used in the 1623 Folio of "Shakespeare" and also in Bacon’s Novum Organum. MPH