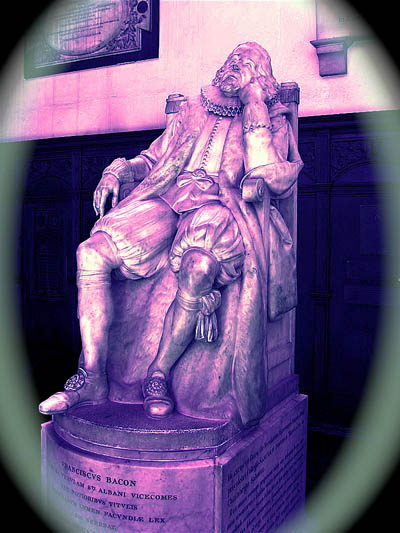 Nay, the same Solomon the king, although he excelled in the glory of treasure and magnificient buildings, of shipping and navigation, of service and attendance, of fame and renown, and the like, yet he maketh no claims to any of those glories, but only to the glory of inquisition of truth; for so he saith expressly,

The Glory of God is to conceal a thing, but the glory of the King is to find it out;

as if, according to the innocent play of children, the Divine Majesty took delight to hide his works, to the end to have them found out; and as if kings could not obtain a greater honour than to be God's play--fellows in that game. --Francis Bacon, The Advancement of Learning (1605)

With this Bacon quote in mind, we now turn to a conversation that recently appeared in Francis Carr's Fortnighly News Sheet between Professor Jonathan Bate, a British scholar of Shakespeare and Romanticism and Barry Ide, Cervantes Professor of Spanish at Stratford University :

Jonathan Bate : What do you think of Francis Carr's book, Who Wrote Don Quixote?
Barry Ide : I'd rather not say anything at the moment.
Bate : I've been asked by the Daily Telegraph to review it. Can you tell me if you think it's ridiculous?
Ide : I'd rather not comment, as you can understand.
Bate : If I don't write this review, they will think that Carr is right. Have they got in touch with you?
Ide : Yes, I told them I couldn't say anything now. But you don't want Bacon to get any publicity, do you?
Bate : No. But I don't think we can do nothing.
Ide : Why not?
Bate : Too many questions are being asked. That damned Internet! Is Carr right? Tell me, are you 100% certain that Cervantes wrote Don Quixote?
Ide : No. Can you wait before putting pen to paper?
Bate : Sooner or later we will have to come clean.
Ide : I'll write to you next week about this.

Bate : I am still waiting for your letter about Francis Carr's Who Wrote Don Quixote?
Ide : I'm sorry I have not got around to writing it.
Bate : The Telegraph rang me yesterday. They want to put my review in a special feature next month.
Ide : About what?
Bate : The Novel. They want to start with Don Quixote.
Ide : Oh dear!
Bate : They are suprised I have not said anything about Carr's book. I have asked them to postpone this feature. The press have been told not to review this book, and there has been very little advertising. But more and more of my students are asking me what I think of it.
Ide : What is your reply?
Bate : I would like to be able to tell them what you think. We have known about Cervantes, of course, for a long time. But we never encourage students to study Cervantes himself. When can you write to me?
Ide : Give me another week......

Jonathan Bate was educated at Sevenoaks School and the University of Cambridge. He teaches at Warwick University.His publications include Shakespeare and Ovid (1993), the Arden edition of Titus Andronicus (1995), The Genius of Shakespeare (1997), and he is currently editing a new edition of Shakespeare's Complete Works for the Royal Shakespeare Company.

Competition creates losers. The losers naturally resent the winner, who deprives them of victory. In the race to win the real Shakespeare prize, all the contenders are----for the time being enjoying the challenge. The one event that they fear is defeat, when the winning post is reached. So it is natural that they refrain from giving their rivals any publicity. They would not review a book which supports someone who is not their favourite---unless, of course, they can rubbish it.
The Stratfordians, Oxfordians and Marlovians have all been struck dumb by Francis Carr's Who Wrote Don Quixote. It clearly demonstrates Bacon's authorship of the Spanish novel and the Shakespeare plays. Attacks on Bacon's authorship claim are more difficult, so the professors prefer to keep their mouths shut. They have agreed with their Spanish counterparts perhaps that they will not uncover Bacon's authorship of Don Quixote, as that will also uncover his creation of the Shakespeare plays. With the publication of Carr's book the case for Bacon becomes even more difficult to refute. It is in fact impossible.