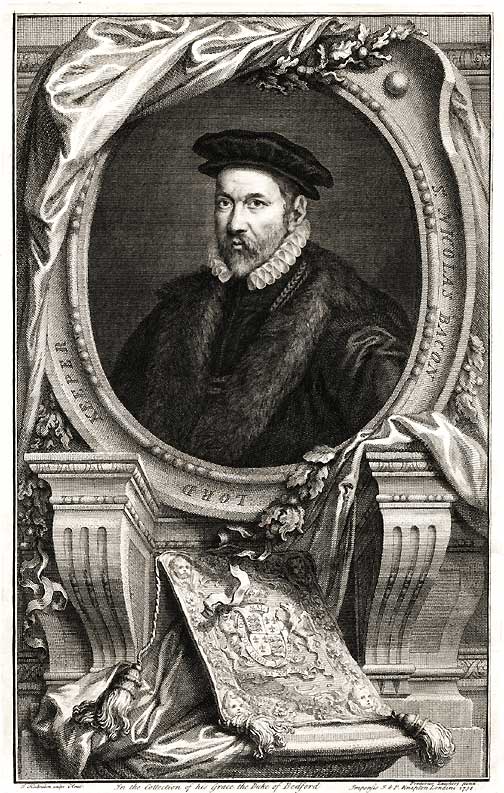 This print is approximately 263 years old, was published in London by J & P Knapton in 1738. This plate was drawn by Frederico Zucchero, engraved by J. Houbraken and printed on fine laid paper.

“Nicholas Bacon was born at Chislehurst, in Kent, in 1509. He was of non-aristocratic but comfortable origins The second son of Robert Bacon, of Drinkstone, in Suffolk, Esquire and Sheep-reeve to the Abbey of Bury St. Edmunds. He was admitted to Corpus and took the degree of B.A. in 1526-7. Following a visit to Paris he went into the law and after studying at Gray's Inn he was called to the Bar in 1533. He rose through the ranks of legal and state service and, unlike Parker, managed to remain in post on the accession of Mary when he conformed to the change of religion. Nicholas Bacon and William Cecil married sisters and when Elizabeth came to the throne Cecil became her adviser. Bacon's experience of business, finance and the law lead, through Cecil's influence, to the Queen making him Keeper of the Privy Seal, with the title of Lord Keeper, on the 22nd December, 1558. He was sworn into the Privy Council and knighted in 1559 and had the full powers of a Chancellor conferred upon him. He retained this post until his death in 1579, which for the times was a remarkable achievement.

His contemporaries were almost embarrassing in their praise of him, but from their comments we can get some idea of the man: "In deede he was a most eloquent man and of rare learning and wisdome as ever I knew England to breed, and one that joyed as much in learned men and good witts." "an archpeece of wit and wisdom, he was abundantly facetious which took much with the Queen when it was suited with the season as he was well able to judge of his times." "Sir Nicholas Bacon, was a man full of wit and wisdome, a gentleman and a man of Law with great knowledge therein."

"This gentleman understood his Mistress well and the times better: He could raise factions to serve the one and allay them to suit the others. He had the deepest reach into affairs of any man that was at the Council table: the knottiest Head to pierce into difficulties: the most comprehensive Judgement to surround the merit of a cause: the strongest memory to recollect all circumstances of a Business to one View: the greatest patience to debate and consider; (for it was he that first said, let us stay a little and we will have done the sooner:) and the clearest reason to urge anything that came in his way in the Court of Chancery. . . . Leicester seemed wiser than he was, Bacon was wiser than he seemed to be; Hunsden neither was nor seemed wise. . . . Great was this Stateman's Wit, greater the Fame of it; which as he would say, being nothing, made all things. For Report, though but Fancy, begets Opinion; and Opinion begets substance. . . . He neither affected nor attained to greatness: Mediocra firma, was his principle and his practice. When Queen Elizabeth asked him, Why his house was so little? he answered, Madam, my house is not too little for me, but you have made me too big for my House. Give me, said he, a good Estate rather than a great one. He had a very Quaint saying and he used it often to good purpose, That he loved the Jest well but not the loss of his Friend. . . . He was in a word, a Father of his country and of Sir Francis Bacon."

Nicholas Bacon was the father of the great English poet and polymath Sir Francis Bacon. But the relationship between them is rather mysterious. In February, 1579, Francis Bacon dreamt that Sir Nicholas Bacon's house was plastered over with black mortar, and he awoke with a premonition of doom. He found a few days later that his father had died suddenly on the 20th February. When he returned from France he found that although his father had left a very complex will, from which the College and other members of his family benefited, his son Francis had no provision at all. This omission has fuelled much speculation that the precocious Francis was in fact the son of Queen Elizabeth herself and that the Bacons acted as foster parents. Nicholas' wife Anne was indeed chief lady-in-waiting to the Queen and would therefore have been in a position to help hide the birth of an illegitimate child, and her Lord Keeper's family an appropriate place in which to bring up a Royal child.