A Sentence from Shakespeare 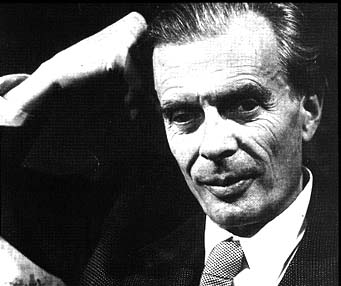 Aldous Huxley , influential writer and educator had a great admiration for Shakespeare. This was reflected in Huxley's poignant selection of Shakespeare phrases such as Tomorrow and Tomorrow and Tomorrow , Brave New World, and Mortal Coils and utilizing them for titles of books and plays. He also named a series of traveling articles, Jesting Pilate , after a line from the famous Francis Bacon essay, "Of Truth." Although Huxley did not write about the Shakespeare Authorship he did contribute some penetrating observations inspired from the language of Shakespeare.- Lawrence Gerald
Huxley's comments about Bacon :

"Bacon felt very strongly that one of the values of science was in its fruits, that it could do a great deal to lessen human suffering.  As we know, it can also do other things of which we are painfully aware at the present time. As Bacon was never tired of saying, knowledge without love can be profoundly corrupt and even evil. He blamed philosophers like Plato and Aristotle, not only because they lacked the humility to study objective facts and base their reasoning upon those facts, but because they  had pursued knowledge purely for the sake of intellectual satisfaction, not with the motive of love or in order to help human beings.  " --The Human Situation, lectures at Santa Barbara, 1959.

This essay, "A Sentence from Shakespeare" originally appeared in Time Must Have a Stop (1945).

If you say absolutely everything, it all tends to cancel out into nothing. Which is why no explicit philosophy can be dug out of Shakespeare. But as a metaphysic-by-implication, as a system of beauty-truth, constituted by the poetical relationships of scenes and lines, and inhering, so to speak, in the blank spaces between even such words as "told by an idiot, signifying nothing," the plays are the equivalent of a great theological Summa. And of course, if you choose to ignore the negatives which cancel them out, what extraordinary isolated utterances of a perfectly explicit wisdom! I keep thinking, for example, of those two and a half lines in which Hotspur casually summarizes a whole epistemology, a whole ethic, a whole theology.

But thought's the slave of life, and life's time's

And time that takes survey of all the world

Must have a stop.

Three clauses, of which the twentieth century has paid attention only to the first. Thought's enslavement to life is one of our favorite themes. Bergson and the Pragmatists, Adler and Freud, the Dialectical Materialists and the Behaviorists-all tootle their variations upon it. Mind, we are told, is nothing but a food-gathering mechanism; controlled by unconscious forces, either aggressive or sexual; the product of social and economic pressures; a bundle of conditioned reflexes.

All this is quite true so far as it goes; quite false if it goes no further. For obviously, if mind is only some kind of a nothing-but, none of its affirmations can make any claim to a general validity. But all nothing-but philosophies actually make such claims. Therefore they cannot be true; for if they were true, that would be the proof that they are false. Thought's the slave of life-yes, undoubtedly. But if it weren't also something else, we couldn't make even this partially valid generalization.

The significance of Hotspur's second clause is mainly practical. Life's time's fool. By merely elapsing, time makes nonsense of all that life consciously schemes for in the temporal order. No considerable action has ever had all, or nothing but, the results expected of it. Except under strictly controlled conditions, or in circumstances where we can abstract from reality, ignore individuals and concern ourselves only with vast numbers and the law of averages, any kind of accurate foresight is impossible. In all actual human situations more variables are involved than the human mind can take account of; and with the passage of time the variables tend to increase in number and change their character. All this is a matter of everyday experience. And yet the only faith of a majority of twentieth-century Americans and Europeans is faith in the Future-the bigger and better Future which they know that Progress is going to produce for them, like white rabbits out of a hat. For the sake of what their faith tells them about a Future, which their reason assures them to be almost completely unknowable, men are prepared to sacrifice their only tangible possession, the Present. During the last thirty years about 50 million of Europeans have been liquidated in wars and revolutions. Why? The nationalists and revolutionaries all give the same answer. "In order that the great-great-grandchildren of those who are now being liquidated may have an absolutely wonderful time in A.D. 2043." And (choosing, according to taste or political opinion, from among the Wellsian, Marxian, or Fascist blueprints) we solemnly proceed to visualize and describe the sort of wonderful time these lucky beggars are going to have. Just as our Victorian greatgreat-grandfathers solemnly visualized and described the sort of wonderful time we were going to have in the middle years of the twentieth century.

True religion concerns itself with the givenness of the timeless. And idolatrous religion is one which substitutes time for eternity-either past time, in the form of a rigid tradition, or else future time, in the form of Progress toward Utopia. And both are Molochs; both demand human sacrifice. Spanish Catholicism was a typical idolatry of past time. Nationalism, Communism, Fascism, all the twentieth-century pseudo-religions, are typical idolatries of future time.

What have been the consequences of Western man's recent shift of attention from past to future time? An intellectual progress from the Garden of Eden to Utopia and the Classless Society; a moral and political advance from compulsory orthodoxy and the divine right of kings to military and industrial conscription for everybody, the infallibility of the local political boss and the deification of the State. Before or behind, time can never be worshiped with impunity.

But Hotspur's summary has a final clause: time must have a stop. And not only must, as a prophecy or an ethical imperative, but also does have a stop, in the present indicative tense and as a matter of brute empirical experience, here and now, for all who so desire. It is only by taking the fact of eternity into account that we can deliver thought from its slavery to life. And it is only by deliberately paying our attention and our primary allegiance to eternity that we can prevent time from turning our lives into a pointless or diabolic foolery. Brahman, the Ground, the Clear Light of the Void, the Kingdom of God are all one timeless reality. Seek it first, and all the rest- from an adequate philosophy to a release from the compulsion to stultify and destroy ourselves-will be added. Or, to put the matter in Shakespearean language, if we cease to be "most ignorant" of what we are "most assured, our glassy essence"-the indwelling spirit, the principle of our being, the Atman-then we shall be other than that dreadful caricature of humanity who

As make the angels weep.