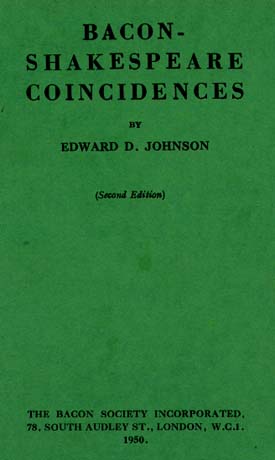 Go to the Directory of Coincidences

The preface from Bacon-Shakespeare Coincidences by Edward Johnson.

Coincidence means the act of coinciding; an event that connects itself with some other event in an unforeseen manner. If the two events are not unforeseen, but are connected in some deliberate way, then they are not coincidences: The argument for coincidences may be stated thus: one coincidence has no significance, five attract attention, ten suggest inquiry, twenty raise a presumption, fifty establish a probability, any number over fifty should dissolve every doubt. Therefore, ninety-five of these coincidences are submitted to the reader for their consideration.

Many of these examples are taken from Francis Bacon Our Shakespeare by Edwin Reed, now out of print and for further information on this subject the reader is referred to that work, where the examples are set out more fully.

It seems clear that Francis Bacon had certain unknown connections with the literature of his time, and that his literary activity was far wider than he himself ever publicly acknowledged.

The before mentioned examples of so called coincidences show us that there appeared to have lived a the same time two men-- "Shakespeare" a great dramatist, and Bacon a great philosopher--who both held the same opinons (often erroneous); had the same thoughts; had the same friends; were both aristocrats; were both educated at a university; were both great orators and lawyers; both had travelled abroad; both were familiar with the art of play acting; both used the plots of others for their dramas and histories; both were familiar with the Spanish, Italian, Greek and Latin languages; both changed their minds on certain points at the same time; both took a great interest in efforts to secure the repeal of obsolete laws; both hated Sir Edward Coke; both had an enormous vocabulary; in fact both were the same man, Francis Bacon. -- Edward Johnson