In July 1994 I put ten questions to Professor Stanley Wells, the Director of the Shakespeare Institute at Stratford-on-Avon. These questions, his replies, and my response to these answers are printed here. 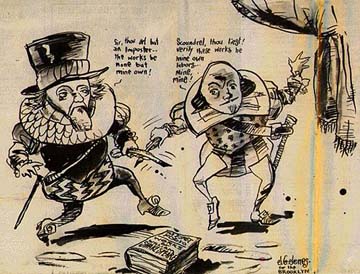 1
Carr: In your recently published book, "Shakespeare, A Dramatic Life," you say "I do believe that the author was William Shakespeare." You would not use that verb, believe, in a similar statement about Dickens or Thackeray, surely. You would say "(I know that) Dickens is the author of "Oliver Twist". Knowledge does not need belief.

Wells: The Oxford English Dictionary offers as one of its definitions of "believe" "to accept a statement as true". It does not seem to me unreasonable to use this verb in relation to a belief that has been questioned.
2
Carr: In Collins Dictionary the definition of belief is "a principle, proposition, idea, accepted as true, esp. without positive proof. Believe: to accept a statement or a supposition as true. I believe that God exists...to be convinced of the truth or existence (of): to believe in fairies...to assume or suppose."

Wells: My belief about what constitutes proof that William Shakespeare of Stratford-on-Avon wrote the works generally ascribed to him can be found in the third paragraph on page 10 of my book.

Carr: On page 10 of your book on Shakespeare, you acknowledge that references to him in local records do not identify him as an author. All you can put forward as proof that he did write the Shakespeare plays is his will, which makes no reference to authorship, no mention of any book.

That is the only document that you can give us. You mention the monument, and on it the names of Socrates and Virgil; but you do not tell the reader that, in the obituary poems written in praise of Bacon, he is also compared to Socrates and Virgil - and to Nestor. In these poems we learn that Bacon wrote comedies and tragedies. The only other piece of evidence you can offer is Jonson's mention of The Sweet Swan of Avon.

2.A swan is not a singing bird. Jonson makes no comment on the song of the swan but refers only to its flight in London, on the banks of the Thames. In Bacon's Advancement of Learning he tells us that Ariosto "feigns that at the end of the thread or web of every man's life there hangs a little medal or collar, on which his name is stamped; that Time waits upon the shears of Atropos, and as soon as the thread is cut, snatches the medals, carries them off, and throws them into the river Lethe; about the river there are a few swans, which, if they get a medal with a well-known name, at once carry it off to a temple consecrated to immortality." You will see that Jonson does not say the Swan of Avon is the poet.

Wells: Yes, I do find it surprising that Shakespeare's authorship of the works ascribed to him has been questioned. There are many early writers about whose life only supposition can be made but whose authorship has not been doubted. Far less is known, for example, about John Webster or John Ford.

Carr: I find this answer very weak. You would surely expect that more would be known about Mozart than Cimarosa or C.P.E. Bach. How often does one see a performance of "The Duchess of Malfi" or " 'Tis Pity She's a Whore"?

4.Carr: Students of literature in all countries are encouraged to study the lives of great authors, to achieve a greater understanding of their work. The one exception here is William Shakespeare, whose life, students are told, is not a matter of great importance. How do you account for this anomaly?

Carr: I do not know of any author whose life is regarded of minor importance by teachers of literature, apart from Shakespeare. Why are biographies so popular? In your Life of Shakespeare, you would, I am sure, have been only too glad to have been able to include more details about the man of Stratford. You only gave us a few crumbs.

5. Carr: In the Bodleian, in the British Library and in other collections, there are 23 Elizabethan and Jacobean plays in manuscript. The manuscripts of the many Shakespeare plays are conspicuous by their absence. Is this not another justification for doubt about Shakespeare's authorship?

Wells: In fact more than 23 plays of the period survive in manuscript. But they form only a very small proportion of those that are known to have existed. We have no manuscripts of plays by John Lyly, Ben Jonson, John Webster, John Marston, or many other contemporaries of Shakespeare. Absence of manuscripts has no bearing on the question of authorship.

Carr: See my answer to your reply no.3. If we had no manuscripts of the music of Allegri, Merbecke and Dowland - all brilliant composers - we would not be amazed. You are asking us to accept passively that we have no scores written by Mozart. I consider that absence of manuscripts can have a bearing on the question of authorship. There are no Cervantes manuscripts.

6 Carr: In the 1623 First Folio, there are six plays in which can be found many lines and speeches that were not there in the previously printed quarto editions. All the additions are unquestionably Shakespearean in every way. Shakespeare died in 1616; Bacon died in 1626. Could Bacon have been the unnamed Editor of the First Folio?

Wells: In principle there is no reason why any literate person living in 1623 should not have been the editor of the First Folio. As Heminges and Condell signed the Dedication and the Introductory Epistle to this volume, it is not unreasonable~ to suppose that they undertook the task, especially as Shakespeare left them legacies in his will. There is nothing whatever to connect Bacon with the volume.

Carr: I see you have no suggestions, apart from Heminges and Condell, for the very important task as editor of the 1623 Folio. And you tacitly admit that Bacon could be the author. "Any literate person living in 1623" could not have carried out this operation so brilliantly, defying anyone to detect which lines were written by Shakespeare and which additions had been made by another hand. Schubert's Unfinished Symphony and "Edwin Drood" have been completed by other hands, but no-one has said that the standard set by Schubert and Dickens has been maintained.

Carr: Shakespeare's name was not included on his grave in the church at Stratford. Why? Do you know the name of any other famous Englishman who was buried anonymously?

Wells: I am not an expert on gravestones, but no, I do not know of anyone else who was buried anonymously. But the nearby monument in the church names Shakespeare without any doubt.

Wells: I agree that it seems odd that the slab names no one, but I don't see that it has any bearing on the authorship of the plays.
8
Carr: Here we have the only gravestone in the world of a famous person whose name has been deliberately omitted, the gravestone of the only world-famous author whose authorship has been seriously disputed. And you calmly say that you do not see that there could be any significance in this unique absence of a name on the grave. Is this not Nelson putting the telescope to his blind eye?

Wells: Shakespeare did not publish his plays. There is no evidence that he had anything to do with their publication. Many other plays of the period were published without an author's name. Plays were written first and foremost for performance.

Carr:See my replies to answers 3 and 5. I am glad that you admit that there is no evidence that the man of Stratford had anything to do with the publication of the Shakespeare plays. Most of the plays of the period were printed with the author's name on them not surprisingly. Whenever the author's name is omitted on the title page, one is entitled to question the authorship. Why deliberately leave the author's name unprinted? There is always a reason for anonymity.

9 Carr: Between 1591 and 1622, there were as many as 61 quarto editions of the Shakespeare plays. With this abundance of printed matter - an expensive operation - how do you account for the complete absence of manuscripts? Could these manuscripts still be in existence? As Bacon said in his Advancement of Learning, "Time brings forth the hidden truth."

Wells: The number of editions has nothing to do with survival of manuscripts, except that once a manuscript had been used by a printer, it would be liable to be thrown away as of no further use. The romantic attitude to manuscripts is a much more recent development. By far the largest proportion of dramatic manuscripts have failed to survive. But new ones occasionally turn up, and it is certainly possible that the manuscript of a Shakespeare play awaits discovery.

Carr: If Shakespeare had written only two or three plays, the disappearance of his manuscripts would not have been so surprising. But here we have a prolific author of plays and poems, and not a line remains.

9 Carr: No other author before the nineteenth century has had so many editions printed in his lifetime in this country. You talk about the romantic attitude to manuscripts. What is romantic about the preservation of an author's written work? You agree with my statement that 23 or more than 23 - plays of the period are still with us in manuscript. You today - or in 1616 - would carefully preserve a Shakespeare manuscript. That is not being romantic.

Wells: Yes: all those to whom the plays of William Shakespeare have been misascribed.

Carr: Here, it seems, according to you, Shakespeare made a statement that is not true. Can you think of any other Shakespeare quotation that is similarly incorrect? I am glad that you say that this remark of the famous author could refer to a man to whom the plays have been wrongly attributed. I agree.