All’s Well that Ends the Oxfordian Theory:
How Shakespeare himself left proof that Edward de Vere was not the Bard. 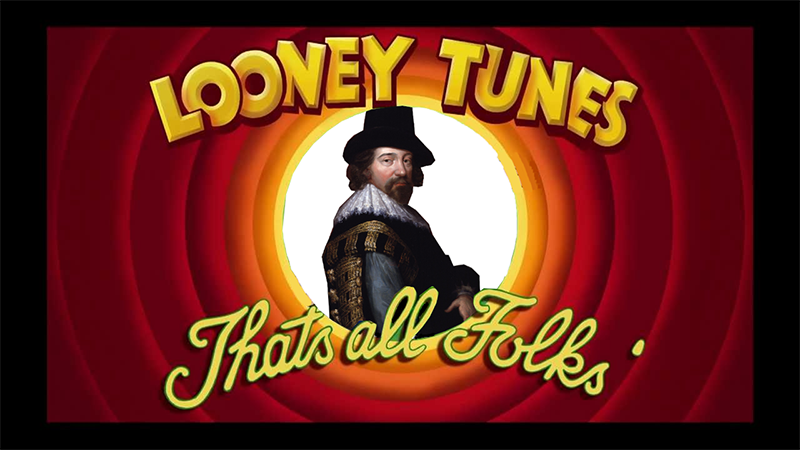 In February 1933, an article appeared in Baconiana entitled “Shakespeare Shows Up The Earl of Oxford in All's Well That Ends Well: The principle characters of the Comedy Identified. It was by Henry Seymour, and can be read in full on sirbacon.org here.

In short, the article demonstrates that the character of Bertram in All’s Well that Ends Well is based on Edward de Vere, the Earl of Oxford, who was also Francis Bacon’s (non-biological) cousin. Now, Oxfordians make great sport of attempting to locate their man in nearly every play, an exercise which is for the most part pure projection and fantasy, but in the case of this play, they are certainly correct. The action in All’s Well that Ends Well depicts some key episodes in Oxford’s life to a remarkably exact degree, as Seymour conclusively demonstrates and contemporary Oxfordians have been only too happy to agree (for example, see here.)
Evidently however, if this is true then the author of the play did not hold de Vere in particularly high regard. Indeed, Bertram is widely regarded as the least likeable of all Shakespeare’s main characters. He is portrayed as a cad, and even blatantly lies to the King in the final act, an action entirely unbecoming of a gentleman in the Elizabethan era and unique amongst Shakespearean leading men.

But please don’t take my amateur word for this. Let’s hear from several renowned Shakespearean commentators on this point:

“I cannot reconcile my heart to Bertram; a man noble without generosity, and young without truth; who marries Helena as a coward, and leaves her as a profligate: when she is dead by his unkindness, sneaks home to a second marriage, is accused by a woman whom she has wronged, defends himself by falsehood, and is dismissed to happiness.”

“…a professional tour de force that only gives the author further chances to blacken Bertram and to make the immature, spoiled fellow seem progressively more unworthy of Helena’s inexplicable devotion.”

“The unamiable character of Bertram seems to constitute the great defect of this drama. He is young, brave, handsome, and highborn; but he is, at the same time, petulant, arrogant, cold, and selfish, and his very vices present no feature of impressive interest. (…) His own character appears to have been made unnecessarily repulsive. We lose all trust in him when, immediately  after his apparent repentance, we find him insolently untruthful in his account of his relations with Diana; and this unexpected aggravation of his demerits seems to be somewhat unaccountably introduced, as we have no such scene in the original tale of Boccaccio.”

Observe in particular the point that Kenny makes: the narrative of All’s Well that Ends Well has been taken over by the author of the play from the Decameron of Boccaccio. In an uncanny parallel, this storyline also happens to mirror events in Oxford’s life. The playwright has depicted de Vere as Bertram, based on the source character of Beltram in the Decameron, but Shakespeare has added his own additional plot elements to portray Bertram as even more morally suspect that Beltram. In other words, Bacon has twisted the knife.

This presents a massive problem for the looney-tunes Oxford-was-Shakespeare theory, because it is unthinkable that any author, and in particular Edward DeVere, well known as the vainest man in the kingdom, would ever portray himself on stage as such a reprobrate as Bertram is depicted by Shakespeare.

But does Bertram really depict Oxford? In Seymour’s 1933 article he presents a surprising argument to support this identification. He set out to demonstrate that all of the leading characters in the play are based on contemporary historical personages, including Oxford, and that, moreover, the names of the characters when converted to number values correspond with the values of the names of the persons to whom they correspond.

This is obviously a very strange suggestion, yet Seymour lays out the evidence for the reader to judge. He takes the character’s names, and converts them to numbers using the standard alphabet code (A=1, B=2, C=3 etc). He then lists these values, together with their suggested corresponding historical identities. Here is his list:

What is especially intriguing about this list is that some of the names of the characters have been slightly altered in their spellings from the original names in Shakespeare’s source material for the play, Boccaccio’s Decameron. For example, in the Decameron, the young Count is named Beltram, but Shakespeare has altered this to Bertram. The region in France called Rousillon is changed to Rossillion, a version of this name which does not occur in any other historical source. There are other examples, and I encourage the reader to refer to the complete Seymour article for the details. The point is that for some reason, Shakespeare made subtle changes to the source names.

And now we come to the point of this note. When I read Seymour’s article, I was impressed with some of his suggested identities between the characters and their corresponding historical figures. Lord Lafew for “L.Burleigh”, or Lord Burleigh, both adding to 90, is very good. Gerard de Narbon for “Dr W. Butts”, physician to Henry VIII (who also appears under his real name in Merry Wives of Windsor) also seemed like a very good hit.
But other suggestions in the list were not of the same quality. For example, if Lafew was Burleigh, then the “Countesse” undoubtedly stood for Lord Burleigh’s wife. However, she never bore the title Dame Burghley, so that could not be a correct match. Further, equating “Bertram” with “17 De Vere”, as both add up to 73, was not very satisfying, as “17 De Vere” could hardly be considered a valid title for Oxford. Seymour identified Helena, adding to 43, as Anne Cecil, but the version of her name he used, A. Cecil, only adds to 32, so clearly that won’t do. Neither will the other alternative he suggested, “Anne Cec.”, as this could hardly be considered a standard contraction.

Nevertheless, the article made some excellent points, and there were sufficient perfect matches in his list of names and numbers to suggest that something was indeed going on here. I wondered if perhaps Seymour had missed some of the true values, so I decided to see if I could supply the missing names and complete the puzzle.

The rules were that the names had to be valid correct versions of the historical persons names, with acceptable contractions of their titles. And so, pencil in one hand and calculator in the other I set out to crack the code. And succeeded.

For Burleigh’s wife, I found that “Lady Burleigh”, her correct title, added to 132, giving the same value as “Countesse R”.

For Anne Cecil, I realised that “La. Cecil”, an acceptably valid contraction of Lady Cecil, her correct name and title, added up to 43, equivalent to the value for Helena.

But one name gave me trouble. I could not work out how Bertram corresponded to any variation of Oxford’s name. I tried every trick I could think of, but nothing seemed to work. In the end, I resorted to Wikipedia to check his list of titles. And there I found that he was also known as Viscount Bulbeck. To my delight, “V. Bulbeck” added to the correct value, 73. With this final piece of the puzzle falling into place, I had now corrected the dubious entries on Seymour’s 1933 list, and the result was eight characters corresponding to historical personages, with valid names all supplying the equivalent numeric code value.

Here below then is the corrected version of Seymour’s 1933 list, first with the alphabet code, so readers can readily confirm the arithmetic. 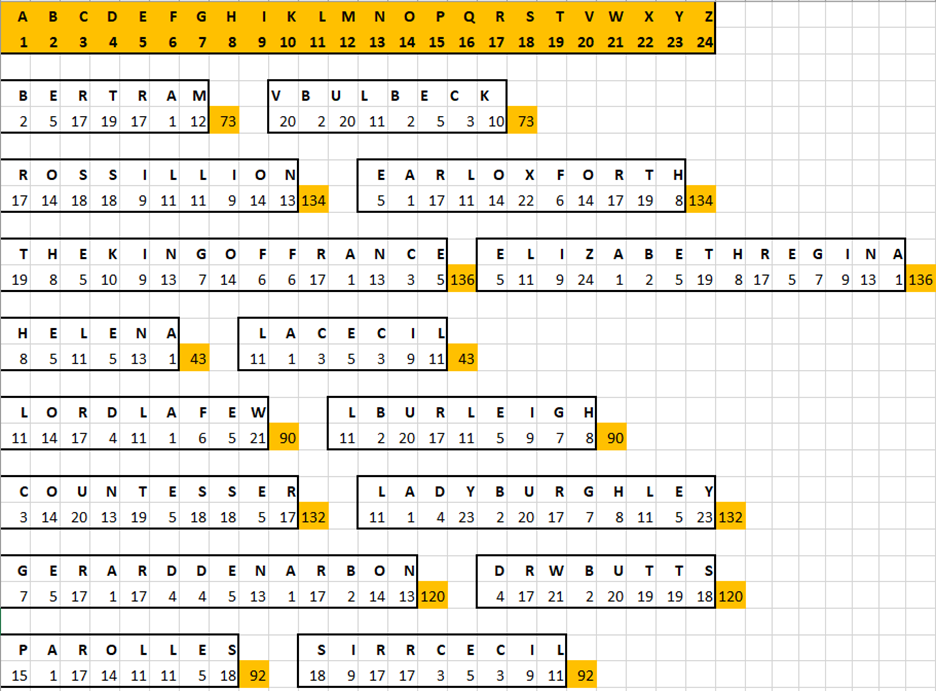 By any standards, this is a very remarkable thing. Here, to restate the result, we have a list of eight Shakespeare characters from the same play, together with their corresponding historical personages, and in each case, there is a perfectly valid expression of their names which results in the same total as the character’s names.

The odds of this occurring due to chance are beyond astronomical. Perhaps a troop of monkeys, given long enough period of time, could somehow type out the works of Shakespeare, as the old saw has it, but there is no chance the simian keyboardists could ever hope to duplicate this result even if they had the entire duration of the universe in which to attempt it. By all means, try it at home: find eight characters in a Shakespeare play, identify plausible historic personages to whom they correspond, then find lawful versions of their names which add to the same value as those of the characters. We won’t wait, but if you do manage to crack this code, please send in your answers to sirbacon.org, and I will eat a print-out of this essay.

There can be no doubt whatsoever, as surprising and even unpalatable as this may seem to modern ears and sensibilities, that Shakespeare has arranged the names of these characters to fit this scheme. This explains the subtle differences in spelling as he took them across from his source material.

This is explosive, because it implies, with mathematical certainty, that Shakespeare did indeed have Oxford in mind as the character of Bertram when he wrote the play. And if this is true, as it must be, then it follows that it is literally impossible that Oxford could be the author! No author in the history of literature would ever have depicted himself as such an unlikable, dishonest cad as Bertram, and certainly not Oxford, whose vanity and self-regard were unmatched for the time, and for most other times as well for that matter.

So let us sweep away the cobwebs. Francis Bacon wrote All’s Well that Ends Well. He used it as an opportunity to take a very thinly veiled swipe at his cousin, the execrable Earl of Oxford, and he left coded clues in the names of the characters to ensure that the identities could not be mistaken.

He could not however have anticipated the madness of our own era, when the completely bonkers idea has taken root that Oxford himself was the author of the greatest plays ever written. But how fortunate for our times that he did: in taking the mickey out of his cousin Oxford, he has left us an iron-clad guarantee that DeVere could not under any circumstances have been the author of that play and depicted himself as Bertram. Thus, Bacon, ever the prescient genius, has left us the proof, if any be required, that Oxford was certainly not the author of All’s Well that Ends Well. And if he did not write that play, then the claim that he could have been responsible for any of the others also evaporates.

For those Oxfordians who would seek to rebut the material presented here, an uphill task presents itself. They must either deny that Bertram represents Oxford, something that has been accepted without cavil up until now by their colleagues, and is in any case rendered virtually certain by the arithmetically coded names. Or, if that challenge should prove too formidable, then they are stuck with having to explain why Oxford, he who “always and ever preferred mine own content above all others” would choose to depict himself on the stage as a liar, a cad and a terrible person. Caught between the devil and the deep blue sea, the Oxford case now sinks without trace. Which is as it should be. All’s Well that Ends Well, and That’s All Folks.