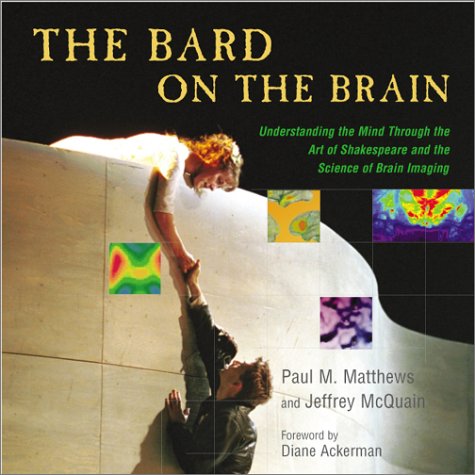 This is your brain in Shakespeare

Book Review :The Bard on The Brain: Understanding the Mind Through the Art of Shakespeare and the Science of Brain Imaging
(Dana Press, $35)

To be, or not to be: that is the question

That line, written by William Shakespeare, continues to captivate readers because people enjoy the cadence and poetry of a well-written sentence. As it turns out, Hamlet's famous speech also illustrates the 17th-century English playwright's keen observations of the human brain and the way it works to consider the human condition, to experience the joy of first love, or even to ponder a moral choice.

That same range of human experience is now the subject of intense scientific investigation as neuroscientists literally map the human brain and discover the neural basis for despair, rage, love and joy. Now neuroscientist Paul Matthews and Shakespeare scholar Jeffrey McQuain have used Shakespeare to illustrate the brave new world of neuroscience.

The resulting book, The Bard on The Brain: Understanding the Mind Through the Art of Shakespeare and the Science of Brain Imaging (Dana Press, $35), pairs classic Shakespeare themes like depression, old age, love and revenge with 21st-century science, complete with color images showing the human brain as it works to produce such emotions.

That pairing offers readers a richer understanding of what it means to be fully alive, says Gail Kern Paster, director of the Folger Shakespeare Library in Washington, D.C. Shakespeare is the perfect choice for such a book because he explored diseases like epilepsy and Alzheimer's as well as the normal development of the human mind ; like the formation of a first memory, she says.

For example, writing in The Tempest a teenager at the time the play opens, suddenly remembers a scene from her childhood. She says she recalls having several women tending to her on their island home, but she says the memory is "far off, And rather dream like."

That scene accurately describes the way a 3-year-old encodes or lays down an early memory, one typically later filled in by details supplied by others. Scientists now know that those imperfectly formed first memories are the result of a brain not fully developed, says Matthews, of the University of Oxford in England.

Using brain-imaging devices, scientists know that music activates many regions of the brain, including those involved in generating feelings of pleasure. Shakespeare seemed to understand the connection well enough, as seen in the romantic play Twelfth Night. In that play, Orsino, duke of Illyria, tries to court the countess Olivia but is rejected. To soothe his lovesick heart, Orsino listens to music and says:

"If music be the food of love, play on."

Neuroscientists are exploring the link between music and pleasure, Matthews says, because a better understanding of what makes humans feel good might one day help researchers find better treatments for depression and other mood disorders. Shakespeare wrote his plays from a small English village during the Elizabethan period, a time of great scientific exploration, Kern Paster says. Today's neuroscientists also stand at the edge of a new frontier: They now know that billions of neurons in the brain "talk" to one another, producing the thoughts, emotions and behaviors Shakespeare so aptly described.

Imaging devices now can take pictures of a human brain under the influence of a depression or wracked by the onslaught of Alzheimer's. Such advances have led to a better understanding of how disease affects the brain. And in many cases, doctors now have therapies for disorders that went untreated in Shakespeare's day. The hope is that such advances will lead to even greater progress against diseases that continue to cause human suffering like the depression that tortured Lady Macbeth along with her husband, who had to stand by and watch his wife wander about in the grips of madness.

When the anguished Macbeth can't take it any more, he implores a doctor to help his wife, saying:

"Cure her of that. Canst thou not minister to a mind diseas'd?"

Macbeth's plea stands today as an urgent reminder of the scientific progress yet to be made.

At the opening of this play, the once-mighty King Lear divides his kingdom in a way that seems to defy logic, a move that might be seen as the subtle onset of Alzheimer's, a disease that afflicts 4.5 million Americans today. As the play unfolds, Lear's once effective decision-making starts to deteriorate, and he experiences flares of strong emotion, key signs of Alzheimer's. Shakespeare wrote about the aging King Lear long before scientists had identified the destruction of brain tissue that causes symptoms of the disease. Yet Lear often looks like a classic Alzheimer's patient : a man found lost and wandering by his daughter's troops.

In this play, Richard III schemes to usurp the crown and feels no guilt for his immoral actions. People have long been fascinated by the mind of an evil person, and Richard III gives us a chilling portrait of a sociopath , a man who seemingly kills not for revenge or out of hatred, but just for sport. Recent scientific findings suggest that damage to certain parts of the brain involved in judgment can sometimes lead to such behavior.

Shakespeare recognizes that depression, a psychiatric illness that afflicts about 19 million Americans, can be triggered by life events such as a death of a loved one. In the soliloquy To Be Or Not To Be Hamlet describes his despair over his father's death and considers ending his own life. Hamlet decides to avenge his father's death and ends up transforming his grief. The crude process that Hamlet went through is much like modern-day cognitive therapy, which also can help lift a depression. (In Hamlet's case, his "cure" was equally destructive.) Yet the playwright also understood that in some cases people can't fix a black mood: Ophelia's suicide later in the same play is a tragic reminder of depression's sometimes deadly toll.

Even today a few people still regard an epileptic fit as the work of the devil, yet Shakespeare described the condition in a matter-of-fact way, as a disease and not a moral failing. For example, Julius Caesar has an epileptic fit after a crowd begins to clamor for Caesar to become king. Casca, a Roman nobleman in the play, describes the collapse: "He fell down in the market-place and foam'd at the mouth and was speechless." Shakespeare's tone suggests that the fit didn't affect Caesar's ruling abilities. In another play, Shakespeare refers to epilepsy as "the falling sickness," the original term for the disorder. Scientists now know that an epileptic fit is caused by the abnormal firing of clusters of nerve cells.