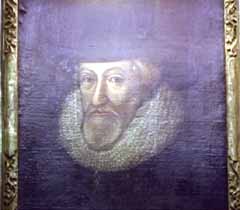 The 1611 King James Bible is ornamented with Bacon's symbols and in my own special copy of the record edition, also dated 1611, these symbols are Rosicrucianly marked to call the attention of the initiated to them and to tell them that the 1611 Bible is without possibility of doubt, one of Bacon's books.....When Bacon was born, English as a literary language did not exist, but once he died he had succeeded in making the English language the noblest vehicle of thought ever possessed by mankind. This he accomplished merely by his Bible and his Shakespeare." --Edwin D. Lawrence author of Bacon is Shakespeare and The Shakespeare Myth from a lecture October 9, 1912

This library which contains about 5,750 volumes, many of the greatest rarity and value, was bequeathed to the University of London in 1929 by Lady D. Lawrence. 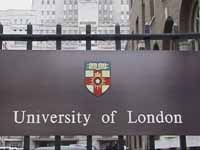 In 1931 the University Court accepted with gratitude an offer by Mrs. Lawrence to disclaim any further rights in it, and to allow the University to enter upon their remainder interest. Mrs.Lawrence added the gift of the library furniture, 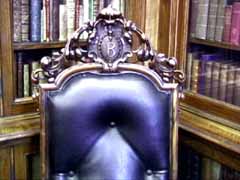 so as to enable the University to reproduce in the new University Library building at Bloomsbury, a room similar to that which housed the Durning Lawrence Library at 13 Carlton House Terrace in the days of it's founder Sir Edwin Durning Lawrence, the well known protagonist of the Bacon-Shakespeare controversy who was a lawyer, a member of Parliament and former student of the University College. 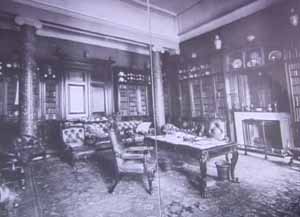 The Library contains, in addition to to many other first editions and bibliographical treasures and it's extensive collection of works on the Shakespeare Authorship issue , a number of books printed before 1500, making a notable addition to the collection of inconabula in other sections of the University Library ; a fine set of the First Folio editions of Shakespeare's Works; a small but valuable Cervantes collection which includes the rare Valencia edition of Don Quixote (1605-1616) and the first translation of Don Quixote into English by Thomas Shelton (Part I, 1612, Part II,1620) one of the very few perfect copies which exist; and an exceptionally complete Bacon collection, including Bacon's autographs

and manuscript annotations, and first and other rare editions of his works,

as well as bindings stamped with the Bacon Crest. Other noteworthy features of the Library include a collection of Rosicrucian literature, some books on secret societies; several rare works on emblems.