Shaker of the Speare

The Companion complements the fact-based novel Shaker of The Speare: The Francis Bacon Story, providing arguments and evidence for the novel's unorthodox storyline ; in particular Bacon's role as the natural son of Queen Elizabeth and author of the Shakespeare works. It can be read independently, or, preferably, in conjunction with the novel. 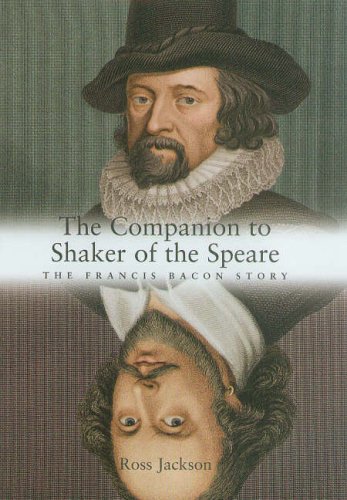 At a time when playwriting was looked down upon, Bacon had to write under a pseudonym, which was quite common at the time. Both his foster parents did the same. Besides, many of the plays dealt with the politically sensitive succession issue, which was naturally of consuming interest to Francis Bacon as hopeful heir to the throne. Much of the documentation cited in The Companion was so sensitive that it first surfaced after hundreds of years had passed. Of course, the inner circle near the queen, the foreign courts, and the literary elite were all well aware of what was going on, as is clearly documented.

Many readers will be especially interested in the arguments for Bacon as author of the Shakespeare works. They are indeed many and varied and almost overwhelming. To touch on just a few briefly:

* Four French courtier names used in Love's Labour's Lost, "Berowne, Dumane, Longavill and Boyet", were discovered in 1917 to be written, with almost exactly the same spelling, in Francis' brother Anthony's passport. Whoever wrote this play must have had access to Anthony Bacon's passport.

* The Shakespeare Sonnets tell us that the Greek goddess Pallas Athena, known as "the shaker of the speare" was the author's muse. Hence the name Shake-Speare's Sonnets. In 1903, a poem dedicated to Francis Bacon by Jean de La Jessé, secretary to the Duke of Anjou, the brother of King Henry III, was found among Anthony Bacon's papers in an old archive. In it, La Jessé refers to Pallas Athena as Bacon's muse. It is well known that Queen Elizabeth sent Francis to visit the French court, where he met King Henry III and the Duke of Anjou, when he was just sixteen-years-old. Incidentally, it is also well known that Francis visited at that time a number of the places mentioned in Love's Labour's Lost.

* Upon Will Shakespeare's death, there was not a single eulogy to the famous playwright, even though this was the custom of the times. Why? Because the literary establishment knew very well that the name was just a pseudonym for Francis Bacon. When Bacon died 10 years later, an enormous outpouring of praise included many mentions of his poetry and his muse, Pallas Athena, though Bacon never published a single poem under his own name.

After William Shakespeare's death in 1616, literally thousands of new lines were written and changes made in many of the plays by someone, as seen in the collected works: The Shakespeare Folio of 1623. Changes even occurred relative to quarto publications as late as 1622. These included changes in beliefs that occur simultaneously in the Bacon and Shakespeare writings after Will Shakespeare's death, but before Bacon's!

Readers are also welcome to visit my website www.ross-jackson.com for excerpts from my writings, and to visit www.gaia.org

Alternatively for North Americans, several offers are available at Abebooks. Just click here and do a search under "Shaker of the Speare" to find the best offers on both books.