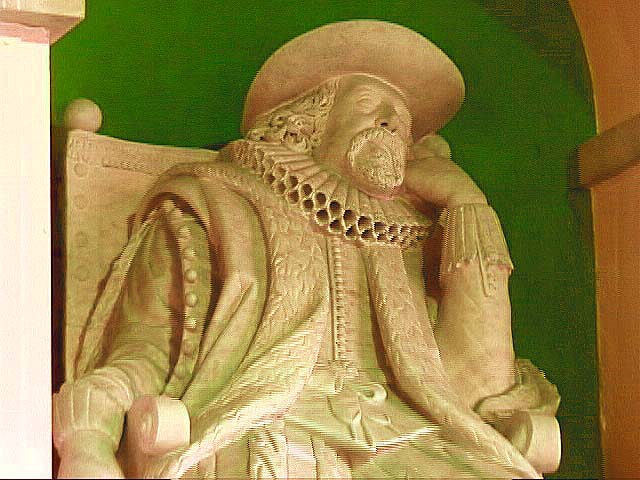 Citation taken from Francis Bacon's Preface to the Advancement of Learning (printed for Thomas Williams at the Golden Bull in Osier Lane in the year 1674) pages 12-13.

In the first paragraph Bacon advises his readers to use the power of Thought or Reason sparingly making each thought a separate study and to avoid the pain of mental indigestion.
The desires or sense must be kept well under control by means of the will so that the energy will not be wasted on things material.
The two globes are the symbols of the physical plane or world of form, and the real spiritual plane which is the archetypal world. As the former is shut out so the latter peforms its task.
The second paragraph teaches the readers to study closely and make proper enquiries into the forces which govern this planet, to search out the hidden springs of wisdom and to apply them rightly on all occasions.
The third paragraph instructs us to avoid pride which is the root of all sorrows, for the people who know the right use of power and apply it need no laws. Laws are only necessary for a people who have lost th way to right living. In the Bible it is stated that the people came unto the Prophets and asked "Prophesy unto us smooth things" and wisdom departed among them.
The fourth paragraph gives us an illustration of how the Spirit works in relation to mankind. Man is the Key that unlocks the Door to the Garden of Understanding. "For the Kingdom of God is within us." The King is the one who governs himself, the man who has attained and received the crown of life.
The fifth paragraph refers to the middle way, which is the Path of Compassion, one of the most difficult of spiritual experiences.
The sixth paragraph shows us the responsibility of partnership. Bacon is pointing the way to the union of Ideas which is not the prerogrative of any one class but is for the benefit of all.
The last paragraph is a form of encouragement to further research and this is not limited to the people of his own time in history but to all ages.
As the principal peformers in the Plays have their exits and their entrances and each in their time plays many parts, so Bacon the creator of this artificial Universe of the Stage conducts his readers through the winding passages of this mortal life; thereby giving to them and to us the opportunites and experiences of joy and sorrow, comedy and tragedy; and ringing down the curtain at the end.
***
This originally appeared in Baconiana December 1958