Search For Any Word on The Sirbacon Site 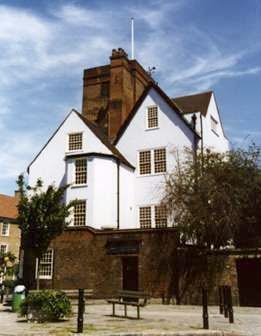 This is the exterior of Canonbury Tower in Islington, London,where Francis Bacon worked and held meetings with fellow Freemasons.

The background of this page is from the panelling of the Compton Room.

Here are photos inside the rooms of the tower.
Click on them to see larger images.

Canonbury Tower is a remarkably preserved Tudor building, first built as part of a country residence for the Prior of St. Bartholomew in the time of King Henry VII, and later transformed into a mansion by Sir John Spenser in the time of Queen Elizabeth I. Sir John was a good friend of Sir Francis Bacon, as was his son in law, Lord Compton, 1st Earl of Northampton, who inherited the mansion.

The rooms of Canonbury were embellished by Sir John with carved oak panelling and fireplaces, with Freemasonic and Rosicrucian symbols, indicating a connection with the secret Rosicrucians societies of his day. Sir Francis Bacon, Imperator of the Rosicrucian Order, took the lease of the mansion during the reign of King James I.

There is strong evidence that the rooms in the Tower were used for special meetings of the Rosicrucian Fraternity.--Peter Dawkins

Francis Bacon and the Society of the Rose

Sir Francis Bacon, Viscount St Alban (1561-1626) was the President of the Fraternity of the Rose Cross and the founder and first Grand Master of modern English Freemasonry. Peter Dawkins in a presentation in June of 2001 spoke about the evidence for this and some of the underlying reasons for Bacon’s association with both the Rosicrucians and Freemasonry, and why this was deliberately veiled. The talk took place in Canonbury Tower, in one of the original rooms that Bacon once used for his Rosicrucian and Freemasonic meetings, where the ‘Invisible College’ once had its headquarters.

For further information, go to http://www.canonbury.ac.uk