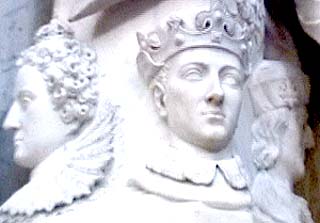 To those who ask....Why disturb History? What does it all matter? I answer, This elucidation of the Elizabethan Engima is a first step towards the complete rehabilitation of a secret historical character, leading to a perfect understanding of the Era from which all our greatness has sprung---in the Imperial and intellectual spheres--in which Elizabeth Tudor and her son Francis played an imperishable part openly and secretly.--Alfred Dodd,p.170. The Marriage of Elizabeth Tudor

".....it is not my meaning to treat him {Francis} as a ward: Such a word is far from my Motherly feeling for him. I mean to do him good."--Lady Anne Bacon in a letter to Anthony Bacon

The fact of Francis Bacon's Parentage--the legitimate son of Queen Elizabeth and therefore the legal heir to the Throne---is indubitable, supported as it is , not only by a mass of circumstantial evidence but by such direct testimony as Leicester's letter to King Philip of Spain, which Mme Deventer von Kunow discovered among the Spanish State Archives, begging King Philip to use his influence with Queen Elizabeth to secure his public acknowledgment as Prince Consort........No one can possibly follow Mme D. von Kunow's revelations and remain unconvinced.--Williard Parker in the Foreword to Francis Bacon, Last of the Tudors

The 1895 edition of British "Dictionary of National Biography" Vol.16 p114 under the heading "Dudley" :

"Whatever were the Queen's relations with Dudley before his wife's death, they became closer after. It was reported that she was formally betrothed to him, and that she had secretly married him in Lord Pembroke's house, and that she was a mother already." - January, 1560-1. In 1562 the reports that Elizabeth had children by Dudley were revived. One Robert Brooks, of Devizes, was sent to prison for publishing the slander, and seven years later a man named Marsham, of Norwich, was punished for the same offence.When Queen Victoria was staying at Wilton House, the Earl of Pembroke told her that in the muniment room was a document which formed written evidence that in 1560 Elizabeth I married the Earl of Leicester. The marriage was performed in secret oath of absolute secrecy. At the time of that marriage the Queen was pregnant by Lord Leicester. The French and Spanish ambassadors reported this and the death of Amy Robsart to their Courts. They also told the Queen that if this was confirmed by her marriage to Leicester, France and Spain would jointly invade England, to remove the Protestant Queen and replace her by a Catholic monarch. Queen Victoria demanded that this document should be produced, and, after she had examined it, she put it on the fire, saying, "one must not interfere with history."

This information was given to me by the 15th Earl of Pembroke, the grandfather of the present Earl.- Andrew Lyell

Elizabeth did marry Robert Dudley privately but she continued to pose as a virgin openly lest she lost the Throne , endangered England, and risked her Lover-husband to the poinard of an assassin. To have made her marriage public would have risked his life, her honour, and have split the nation in twain, for the child that was born in the following January must have been conceived before Amy Robsart's death. Had this leaked to the public---marriage or no marriage---Protestantism in England would have received an almost  fatal blow. Hence the necessity for silence. Lady Bacon mothered the concealed child, that was afterwards known to the world as Francis Bacon---the genius who altered all our Ethical, Educational and Scientific Concepts and who, when he discovered his true parentage, declared his Identity in his works by methods of secret writing so that his  countrymen might know in far-off ages that he was the Son of the Great Queen. His birth and  life became a State Secret, and the Statesmen of the Realm gathered round the Queen to protect her and to hush up the matter.-Alfred Dodd, -The Marriage of Elizabeth Tudor, 1940 ,p.110

Dodd writes : "Francis Bacon's Apologia  respecting the anomalous position into which he was forced by the Queen in prosecution of his brother the Earl of Essex, is very cunningly written, and in it there is sufficient "double writing"  to tell the hidden story of his concealed birth. He says to the Queen :

"....insomuch as it is most true, that immediately after New-year's-tide I desired to speak with her; and being admitted to her, I dealt with her plainly and said, Madam, I see you withdraw your favour from me, and now that I have lost many friends for your sake, I shall leese you too: you have put me like one of those that the Frenchmen call enfans perdus, that serve on foot before horsemen, so have you put me into matters of envy without place, or without strength; and I know at chess a pawn before the king is ever much played upon; a great many love me not, because they think I have been against my Lord of Essex; and you love me not, because you know I have been for him: yet will I never repent me, that I have dealt in simplicity of heart toward you both, without respect of cautions to myself; and therefore vivus vidensque pereo. If I do break my neck, I shall do it in manner as Master Dorrington did it, which walked on the battlements of the church many days, and took a view and survey where he should fall: and so Madam (said I) I am not so simple but that I take a prospect of mine overthrow, only I thought I would tell you so much, that you may know that it was faith and not folly that brought me into it, and so I will pray for you. Upon which speeches of mine uttered with some passion, it is true her Majesty was exceedingly moved, and accumulated a number of kind and gracious words upon me, and willed me to rest upon this, Gratia mea sufficit, and a number of other sensible and tender words and demonstrations, such as more could not be; but as touching my Lord of Essex, ne verbum quidem. Whereupon I departed, resting then determined to meddle no more in the matter; as that that I saw would overthrow me, and not be able to do him any good. And thus I made mine own peace with mine own confidence at that time; and this was the last time I saw her Majesty before the eighth of February, which was the day of my Lord of Essex his misfortune. After which time, for that I performed at the bar in my public service, your Lordship knoweth by the rules of duty that I was to do it honestly, and without prevarication; but for any putting myself into it, I protest before God, I never moved neither the Queen, nor any person living, concerning my being used in the service, either of evidence or examination; but it was merely laid upon me with the rest of my fellows. "

(The M in "Madam) is put into italics[by Dodd] as though the word was intended for "Mother" to whom a Son was speaking. The proper phrase he should have used was, of course, "Your Majesty", as a commoner speaking to his Sovereign; or perhaps, it was to indicate that he knew the Queen personally, and could address her as "Madam.")

See : The Marriage of Elizabeth Tudor