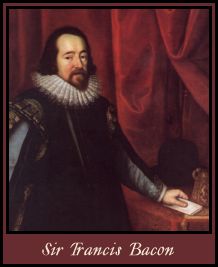 Man, being the servant and interpreter of nature, can do and understand so much and so much only as he has observed in fact or in thought of the course of nature: beyond this he neither knows anything nor can do anything.

Human knowledge and human power meet in one; for where the cause is not known the effect cannot be produced. Nature to be commanded must be obeyed; and that which in contemplation is as the cause is in operation as the rule.

There are and can be only two ways of searching into and discovering truth. The one flies from the senses and particulars to the most general axioms, and from these principles, the truth of which it takes for settled and immovable proceeds to judgment and to the discovery of middle axioms! And this way is now in fashion. The other derives axioms from the senses and particulars, rising by a gradual and unbroken ascent, so that it arrives at the most general axioms last of all. This is the true way, but as yet untried.

The understanding left to itself takes the same course (namely, the former) which it takes in accordance with logical order. For the mind longs to spring up to positions of higher generality, that it may find rest there; and so after a little while wearies of experiment. But this evil is increased by logic, because of the order and solemnity of its disputations.

The understanding left to itself, in a sober, patient, and grave mind, especially if it be not hindered by received doctrines, tries a little that other way, which is the right one, but with little progress; since the understanding, unless directed and assisted, is a thing unequal, and quite unfit to contend with the obscurity of things.

Both ways set out from the senses and particulars, and rest in the highest generalities; but the difference between them is infinite. For the one just glances at experiment and particulars in passing, the other dwells duly and orderly among them. The one, again, begins at once by establishing certain abstract and useless generalities, the other rises by gradual steps to that which is prior and better known in the order of nature.

The axioms now in use, having been suggested by a scanty and manipular experience and a few particulars of most general occurrence, are made for the most part just large enough to fit and take these in: and therefore it is no wonder if they do not lead to new particulars. And if some opposite instance, not observed or not known before, chance to come in the way, the axiom is rescued and preserved by some frivolous distinction; whereas the truer course would be to correct the axiom itself.

The conclusions of human reason as ordinarily applied in matter of nature, I call for the sake of distinction Anticipations of Nature (as a thing rash or premature). That reason which is elicited from facts by a just and methodical process, I call Interpretation of Nature.

Anticipations are a ground sufficiently firm for consent; for even if men went mad all after the same fashion, they might agree one with another well enough.

For the winning of assent, indeed, anticipations are far more powerful than interpretations; because being collected from a few instances, and those for the most part of familiar occurrence, they straightway touch the understanding and fill the imagination; whereas interpretations on the other hand, being gathered here and there from very various and widely dispersed facts, cannot suddenly strike the understanding; and therefore they must needs, in respect of the opinions of the time, seem harsh and out of tune; much as the mysteries of faith do.

In sciences founded on opinions and dogmas, the use of anticipations and logic is good; for in them the object is to command assent to the proposition, not to master the thing.

Though all the wits of all the ages should meet together and combine and transmit their labours, yet will no great progress ever be made in science by means of anticipations; because radical errors in the first concoction of the mind are not to be cured by the excellence of functions and remedies subsequent.

It is idle to expect any great advancement in science from the superinducing and engrafting of new things upon old. We must begin anew from the very foundations, unless we would revolve forever in a circle with mean and contemptible progress.

The honour of the ancient authors, and indeed of all, remains untouched; since the comparison Ichallenge is not of wits or faculties, but of ways and methods, and the part I take upon myself is not that of a judge, but of a guide.

This must be plainly avowed: no judgment can be rightly formed either of my method or of the discoveries to which it leads, by means of anticipations (that is to say, of the reasoning which is now in use); since I cannot be called on to abide by the sentence of a tribunal which is itself on its trial.

Even to deliver and explain what I bring forward is no easy matter; for thingsin themselves new will yet be apprehended with reference to what is old.

It was said by Borgia of the expedition of the French into Italy, that they came with chalk in their hands to mark out their lodgings, not with arms to force their way in. I in like manner would have my doctrine 'enter quietly into the minds that are fit and capable of receiving it; for confutations cannot be employed, when the difference is upon first principles and very notions and even upon forms of demonstration.

One method of delivery alone remains to us; which is simply this: we must lead men to the particulars themselves, and their series and order; while men on their side must force themselves for awhile to lay their notions by and begin to familiarise themselves with facts.

The doctrine of those who have denied that certainty could be attained at all,has some agreement with my way of proceeding at the first setting out; but they end in being infinitely separated and opposed. For the holders of that doctrine assert simply that nothing can be known; I also assert that not much can be known in nature by the way which is now in use. But then they go on to destroy the authority of the senses and understanding; whereas I proceed to devise and supply helps for the same.

The idols and false notions which are now in possession of the human understanding, and have taken deep root therein, not only so beset men's minds that truth can hardly find entrance, but even after entrance obtained, they will again in the very instauration of the sciences meet and trouble us, unless men being forewarned of the danger fortify themselves as far as may be against their assaults.

The formation of ideas and axioms by true induction is no doubt the proper remedy to be applied for the keeping off and clearing away of idols. To point them out, however, is of great use; for the doctrine of Idols is to the Interpretation of Nature what the doctrine of the refutation of Sophisms is to common Logic.

The Idols of the Cave are the idols of the individual man. For every one (besides the errors common to human nature in general) has a cave or den of his own, which refracts and discolours the light of nature; owing either to his own proper and peculiar nature; or to his education and conversation with others; or to the reading of books, and the authority of those whom he esteems and admires; or to the differences of impressions, accordingly as they take place in a mind preoccupied and predisposed or in a mind indifferent and settled; or the like. So that the spirit of man (according as it is meted out to different individuals) is in fact a thing variable and full of perturbation, and governed as it were by chance. Whence it was well observed by Heraclitus that men look for sciences in their own lesser worlds, and not in the greater or common world.

There are also Idols formed by the intercourse and association of men with each other, which I call Idols of the Market-place, on account of the commerce and consort of men there. For it is by discourse that men associate; and words are imposed according to the apprehension of the vulgar. And therefore the ill and unfit choice of words wonderfully obstructs the understanding. Nor do the definitions or explanations wherewith in some things learned men are wont to guard and defend themselves, by any means set the matter right. But words plainly force and overrule the understanding, and throw all into confusion, and lead men away into numberless empty controversies and idle fancies.

Lastly, there are Idols which have immigrated into men's minds from the variousdogmas of philosophies, and also from wrong laws of demonstration. These I call Idols of the Theatre; because in my judgment all the received systems are but so many stage-plays, representing worlds of their own creation after an unreal and scenic fashion. Nor is it only of the systems now in vogue, or only of the ancient sects and philosophies, that I speak; for many more plays of the same kind may yet be composed and in like artificial manner set forth; seeing that errors the most widely different have nevertheless causes for the most part alike. Neither again do I mean this only of entire systems, but also of many principles and axioms in science, which by tradition, credulity, and negligence have come to be received.