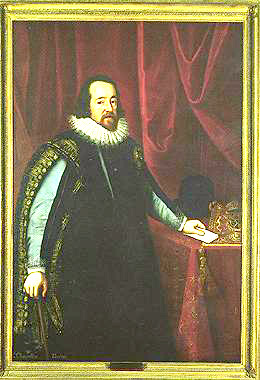 "I wish that as I am the first so I may be the last of sacrifices in your time. And when from private appetite it is resolved that a creature shall be sacrificed, it is easier to pick up sticks enough whither it has straid to make a fire to offer it with."

In December, 1620, a new House of Commons, bursting with grievances, assembled. The first complained loudly and long at the monopolies for the sales of various commodities of common use, which had been granted, (the sole rights of sale), by the King to the brothers of his minister Buckingham, and to other persons, such as Sir Giles Mompesson.
Buckingham, under advice of the Dean of Westminster abandoned his first idea of defending these monopolies. So Mompesson was left to his fate, and was very heavily punished by sentence of the House of Lords.
At this period judges and officials of the Common Law Courts had lost and were losing valuable fees and emoluments by reason of plaintiffs and petitoners to the much safer and speedier proceedings in the Court of the Lord Chancellor and his assistants.
In March, 1621, a committee appointed to inquire into abuses in the Courts of Justice absolutely confined their report to stating that they had received two allegations of corrupt payments to the Lord Chancellor, and collaterally a charge of impure bargain by the Bishop of Llandaph.
The proceedings resolved themselves into a personal attack on the Lord Chancellor. The Common Law Courts were not even reported upon! The Lord Chancellor was ill, and Buckingham called to interview him, and later brought to the House a letter of March 19th, 1621, from the Lord Chancellor, asking for a time to make answer to the allegations. The Lord Chancellor also asked for leave to test the witnesses, "especially against a judge that makes two thousand decrees and orders in a year (not to speak of the courses that have been taken for hunting out complaints against me)" Here he [Bacon] alluded to the employment of a clerk named Churchill (dismissed by the Lord Chancellor for misconduct), who had been paid to get up evidence against his former master.
On April 24th before the King on his throne and the assembled Lords the following submission in writing by the Lord Chancellor was read :

" I do ingeniously confess and acknowledge that having understood the particulars of the Charge, not formally from the House, but enough to inform my conscience and memory, I find matter sufficient and full both to me to desert the defence and to move your Lordships to condemn and censure me."

The growing attack upon the King and his ministers has to be appeased. The ram had to be caught in the thicket and offered as sacrifice.
The letter expressed the Lord Chancellor's desire that his Majesty would take the seal (the Great Seal of which Bacon as Lord Keeper was custodian) into his hands "which is a great downfall, and may serve I hope in itself for an expiation of my faults."
The Lords, being willing to deal with the Lord Chancellor merely upon a general plea of guilty, directed a list of the charges to be sent to the Lord Chancellor, and that he should answer same item by item. And what a hodge-podge, what a conglomerate of shreds and patches the particulars were!
So good and almost complete the particular answers could have been, that the sacrifice would have been thereby jeopardized!
Bacon took care, therefore, to prepare his reply as follows :

"Upon advised consideration of the charges, descending into my own conscience, and calling memory to account so far as I am able, I do plainly and ingenuously confess that I am guilty of corruption, and do renounce all defence and put myself upon the grace and mercy of your Lordships."

This man had, at that date, become a popular idol. With no fixed income,—a poor man, as the people knew him to be,— he was made the recipient of presents of furniture, jewels, and money from all sides. At the same time he was working intensely at the Chancery, making two thousand decisions and orders per annum, needing money, and not knowing or caring whether gifts which kept coming along were mere friendly presents, or were intended to influence him. He decided his cases according to their equity, and none of his decrees were ever impunged.
He was not corrupt. The collection of charges, about a score in real number, amounted to nothing more than a following of the practices of his time, whether rightly called abuses or not.
In the case of thirteen of the score or so of charges, the payments to him were made after suit ended, and were not shown to have been pursuant to corrupt bargain. In the case of two more, the gifts had been refused. In two other cases the suits had been practically ended before receipt of the gifts. Another three of the charges were of accepting loans from persons then or afterwards suitors. Another three were of accepting fees for acting as arbitrator between some disputing Companies. Another for accepting a gift of £1000 from such French vintners for sucessfully composing a trouble with English vinters.
One is reminded of the "Jackdaw of Rheims":

"Never was heard a more terrible curse,
But what gave rise to no little surprise,
Nobody seems one penny the worse."

Certainly in the two charges of accepting gifts pending suit the complainants thought themselves many pennies the worse, because the Lord Chancellor had decided their cases against them.
Bacon was keen to be out of office. He had spent himself in the service of the State, and of speedy justice, and was disgusted and tired with the paltriness of the conduct of his censors. Better to be back at his library work and his wonderful experiments in cryptography.
Moreover the fine phrenzy of the Poet was still in him.
Alban, the Christian Martyr, was beheaded by order of the Emperor Diocletian, and so became St. Alban.
Why should not Francis Bacon, who took the title of Viscount St.Alban, suffer martyrdom in his day?
Hence his great Sacrifice for the protection of the King and his Ministers. And so out of his censure and Downfall the Courts of Justice of later times should be strengthened in honesty of judicial conduct.
As the admittedly Great Genius of his epoch, we may accept his own judgment on the accusations against him.
Before his trial he said to the King :

—A prophetic utterance! And in a letter to the King he wrote:—

"I hope I shall not be found to have the troubled fountain of a corrupt heart in a depraved habit of taking rewards to pervert justice, however I may be frail, and partake of the abuses of the times."

On April 21st another Letter to the King says :

In May the Lord Chancellor was sentenced by the Lords :—

To a fine of £4000.
To be imprisoned in the Tower during the King's pleasure.
To be incapable of any office or employment of the state.
To never sit in Parliament or come within the verge of the Court.

On May 31st Bacon wrote to Buckingham:—

" Howsoever I acknowledge the sentence just, and for reformation sake fit," (I was) " the justest Chancellor that hath been in the five charges since Sir Nicholas Bacon's time."

In judging of what was really thought of Francis Bacon's alleged offense, we may note what followed.
After two days the King released him from the Tower. Later he gave Bacon a full pardon. Later still by a few months from the sentence, he permitted the £40,000 fine to be assigned to trustees as a Crown debt, thereby protecting Bacon from creditors, whose debts, through his loss of income as Lord Keeper, he could not at that time repay in whole or in part. In 1625 he was summoned to Parliament.

Bacon lost no real friends. A hundred gentlemen on horseback rode beside his coach on his way to Gorhambury, thus testifying their complete sympathy and confidence, and their desire to keep him from harm.

In 1622 the King personally, persued and wrote comments on Bacon's MS. of the History of the Reign of King Henry VII.
In the same year Bacon printed his play of "Othello." In 1623 was dated the Folio of his "Shakespeare" plays; although, — if we may judge from a letter of Sir Toby Matthew, Bacon's friend and alter ego who generally was the recipient of a first copy of Bacon's publications,—not ready until 1625.
There will probably be discovered in these plays Bacon's allegorical allusions in word cipher to the charges against him.
He had in effect taken away the work of the Common Law Courts for more speedy progression in the Chancery.
In "Othello" he says (folio 1623) :

"That I haue tane away this old mans Daughter,
It is most true: true I haue married her;
The verie head, and front of my offending,
Hath this extent; no more."

In the folio play of "Henry VI" (though not in quarto) he adds to the words of Judge Say :—

"Iustice with fauour haue I alwayes done,
Prayres and Teares haue mou'd me, Gifts could neuer."

In the folio play of "Henry VIII.", there first printed, he puts much of his thoughts and feelings into the character of Wolsey on his downfall.

"Vanie pompe, and glory of this World, I hate ye,
I feel my heart new open'd."

I know my selfe now, and I feele within me,
A peace aboue all earthly Dignities,
A still, and quiet Conscience. The King ha's cur'd me,
I humbly thanke his Grace; and from these shoulders,
These ruin'd Pillers, out of pitty, taken
a load, would sink a Nauy, (too much Honor)."

"Cromwel, I charge thee, fling away Ambition,
by that sinne fell the Angels : "

"Had I but seru'd my God, with halfe the Zeale
I seru'd my King : he would not in mine Age
Haue left me naked to mine Enemies."

Of friends in late life Bacon had heaps. Doctors, Poets, Clergymen, Judges, and other eminent stood by him to the last.

At this distance of time [1923] after many years of study of Bacon's character and his exertions for the English nation and the development of its language, the writer finds himself in entire agreement with the expressions thus used by him.
Without treading in any detail the words of Sir Henry Wotton, prepared to be cut upon Bacon's Gorhambury monument,— the filial words of Sir Thomas Meauty's,— the panegyrics of Powell, of Cowley, of Sir Toby Mathew, of Sir William Dugdale, of Dr. Rawley, and Archbishop Tenison,— we may conclude with what Ben Jonson, the poet, and his contemporary, published concerning his friend Francis Bacon (Timber,or Discoveries, 1641) :

"My conceit of his Person was never increased toward him, by his place, or honours. But I have, and doe reverence him for the greatness, that was, only proper to himselfe, in that hee seem'd to mee ever, by his worke one of the greatest men, and most worthy of admiration, that had beene in many Ages. In his adversity I ever prayed, that God would give him strength; for Greatnesse hee could not want. Neither could I condole in a word, or syllable for him; as knowing no Accident, could doe harme to virtue; but rather helpe to make it manifest."