"Dogmatic prejudice coupled with a desire to persecute, to expel new truth under the name of heresy, is unfortunately no exclusive privilege of theologians."--Sir Oliver Lodge, Hibbert Journal January 1920. 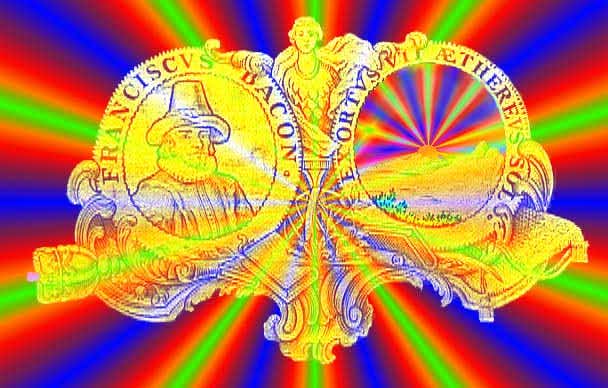 "He was of middling stature; his prescence grave and comely, of a high flying and lively wit, striving in some things to be rather admired than understood; yet so quick and easy where he would express himself and his memory so strong and active that he appeared the master of a large and plenteous storehouse of knowledge, being (as it were) nature's midwife stripping her callow brood and cloathing them in new attire. His wit was quick to the last." Description of Sir Francis Bacon by Arthur Wilson (a contemporary) in "History of Great Britain containing the Life and Reign of King James I.," 1652.

Biography is not an exact science, and it is not made easier to attempt in a case such as this, in which "one man in his time plays many parts." He played those parts out of necessity in an attempt to pursue his literary aims in a way so as not to interfere with his obligations and expectations.

The literary achievements of Francis Bacon cannot be apprehended until the initial fact is accepted that this Proteus masked himself as author under many names, and that various books set as far possible in sequence of date will disclose the main incidents of a marvellous career.

Sir Francis used to mask as " authors" the names of men-players such as Peele, Gosson, Marlowe, Greene, Lodge, and Shakespeare, and those of clerks such as Spenser, Kyd, Nash, Whitney, and Webbe, and of clerics like Bright and Burton. One military man, Barnable Rich, served on occasion, as did pen-names such as "Euphues," " John Lyly," "Thomas Watson," "Immerito," and "Anonimous." A number of the men-players were paid for the use of their names.

Of these "authors" no "biographies" or serious essays in that direction were attempted until the nineteenth century, and then without satisfactory results. Those readers of this book who are not choked with indignation at the above extensive authorship claims are politely requested to read on.

An admittedly garabled "Life of Bacon" was printed by his chaplain,

Rawley, in 1657. But Rawley, expressly stated in his Preface that he had not left to a future hand anything which he found to be of moment and communicable to the public. Also:" And the rather in regard of the distance of time since his Lordship's days whereby I shall not tread too near upon the heels of truth."

A sort of "Life of Spenser" was prefixed to a collected folio editon of the "Spenser" poems in 1679. It was, however, manifestly a feigned account, intended to burke enquiry until a certain time had elapsed from Sir Francis Bacon's death. The same remark can be applied to the ridiculous "Life of Shakespear," which the Poet Laureate, Nicholas Rowe, prefixed to an edition of the Shakespeare plays in the year 1709. By certain secret numerical signs, books, proceeding from members of the Rosicrosse secret literary fraternity established by Francis for the advacement of learning, arts, sciences, manners, and the religion taught in the Established Church, were made known to the brethren. The 1679 "Spenser" Folio and Rowe's 1709 edition of the "Shakespeare" plays exhibit those signs. The monograph on Shakespeare in Fuller's "Worthies," 1662, and John Milton's sonnet on "Shakespear," 1630, both exhibit Rosicrucian signs.

Sir Francis Bacon planned for the revelation of his true identity and work after many years from his death had passed over. Certain cipher accounts of his life and works have now been decoded with sufficient accuracy to tell persons of this generation who he really was, and to a considerable extent the literary work he accomplished in his lifetime under various pen-names. He did not disclose all of his literary vizards, as he would not wish to confuse the search for cipher inserted in books attributed to the authorship of a definite seven "authors." Other masks could, he knew, be found later. From the ciphers in the books of the seven it was decoded that Francis was the elder son of a secret marriage between Queen Elizabeth and Lord Robert Dudley, afterwards Earl of Leicester. The trouble of his life arose from the circumstance that although born in wedlock he was begotten during the time that Lord Robert's first wife (Amy Robsart) was alive, and was born five months after that poor lady's death. It was impossible, in view of the Roman Catholic opposition to the Queen (the religion professed by many of her subjects), that she could admit the marriage. A second son of this union--viz, Robert, afterwards second Earl of Essex-- was born about six years later, but the Queen was for the same reason debarred from a confession of parentage, which, although correct so far as Robert was concerned, would have involved the disclosure of the sordid circumstances associated with the birth of Francis. Both sons were taken from her at birth and brought up as other people's children; Francis in the family and as the believed younger son of Sir Nicholas and Lady Anne Bacon; Robert as the son of Walter, first Earl of Essex, and his wife Lettice ( daughter of th Queen's cousin). These matters are mentioned in order to explain a situation which without this key could not readily be understood.

A secret may not be one in fact. Many people know it or consider they do. But concerning an autocratic sovereign like Elizabeth, to have repeated it openly and unproven would have been high treason. However true, its truth was not provable, and the man or woman who ventured to affirm that Francis and Robert were sons of the Queen was liable to the severest punishment. Indeed, one Norfolk gentleman named Marshan was condemned to lose his ears for having stated that the Queen had two children by the Earl of Leicester. Amongst the fifty odd peers of that time, and the fifty or more knights and gentry who, and whose wives, were admitted to the intimacies of the Royal Court, there must have been a general suspicion that Francis and Robert were sons of the Queen, whether bastards or not. Royal bastards have been tolerated in almost all times. But unless royal parents proclaimed or admitted the bastrardy or lawful issue, courtiers had to keep their mouths shut. As this narration proceeds it will be seen how convention and the wishes of the Sovereign were observed, though, through it all, the real relationship reveals itself. This biography is mainly concerned with the concealed literary career of Sir Francis Bacon. That is the matter of main importance. The contemporary evidence of this secret literary work is ample. Statements by Francis himself, and by or to the Earl of Essex, Anthony Bacon, Ben Jonson, John Davies, Sir Thomas Bodley, Lord Burleigh, and William Rawley, who knew him personally, will be referred to in due course.

See the rest of the book