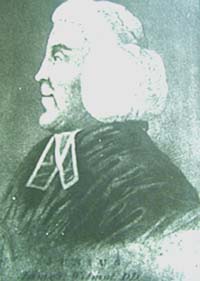 From a woodcut of the Rev. James Wilmot, D.D., who was the first to name Francis Bacon as the author of "Shakespeare." He was born at Warwick in 1726 (exactly 100 hundred years after the death of Bacon) After taking his degrees at Trinity (Oxford), he became curate at Kenilworth, and from thence was promoted to the rectorship of Barton-on-the-Heath about 15 miles from Stratford, on the Gloucestershire borders. He was a great scholar in an unobtrusive way, and devoted much study to the works of Bacon and Shakespeare until his death at Barton in1808.
The only memoir of his life was written by his niece, Mrs. Olivia Serres, who attributed to her batchelor uncle the authorship of The Letters of Junius.