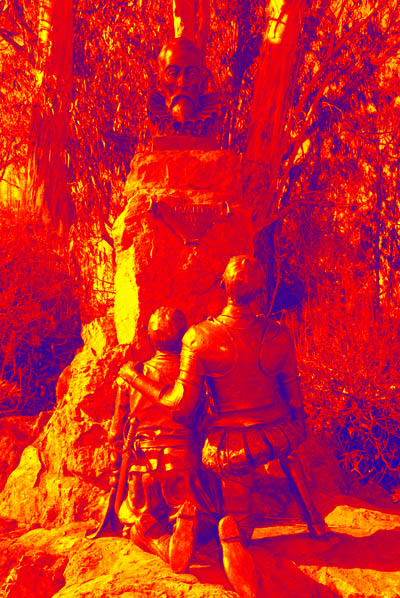 When Settlers first came to the New World for a long time they huddled along the East Coast before striking out into the great-unexplored continent beyond. Baconians, who first came to the New World of Francis Bacon, for a long time have huddled along the East coast of the Shakespeare works, but now comes Francis Carr. Francis Carr has written an important book. With his book Who Wrote Don Quixote he strikes off into new territory making himself the Daniel Boone, or Simon Kenton of the vast unexplored continent of Francis Bacon's concealed writings. To most people Don Quixote is only a masterpiece, but Carr sees a mystery in addition to a masterpiece, and in his 198-page book Carr makes a full-scale study of this mystery. Carr believes Francis Bacon, not Miguel Cervantes, wrote Don Quixote, and in a foray, sure to evoke a sense of déjà vu in those pesky Baconians who keep pulling the scab off Stratfordian orthodoxy, he presents a great deal of evidence to support his contention.

Carr notes in the case of Cervantes many suspicious circumstances reminiscent of those in the case of theShakespeare. Emerson said of William Shakespeare, "I cannot marry the man to his verse." Carr says of Cervantes I not only cannot marry the man to his prose, I cannot even marry his prose to his prose, noting that the several other works under Cervantes' name: The Exemplary Stories, The Tale of Foolish Curiosity, La Galatea, The Labor of Persiles, and so on, are of such a marked mediocrity they present irreconcilable differences with the masterpiece that is Don Quixote. As icing on the cake Carr observes, "There is no manuscript", no letter, no diary, no will, and no document that proves that Cervantes wrote Don Quixote", but the coup de grace comes when Carr shows us that the book itself states emphatically 33 times that Cid Hamet Benengeli, not Cervantes was the author. For example, the Thomas Shelton translation, in chapter 1 of Book 2 of the Part One of Don Quixote, says:

"The historie of Don-Quixote of the Mancha, written by Cid Hamet Benegeli"

Moreover, as Carr says, we are told 33 times in Don Quixote that Hamet is the real author, a number that has often been associated with Bacon. Carr notes that on the title page of the English edition of Don Quixote, published in 1612, the name of the publisher, Ed Blounte, appears (and also on the second part published in 1620). In view of the evidence that Bacon wrote Shakespeare, it is not surprising that Carr finds it suspicious that this is the same Ed Blount, who along with Isaac Jaggard, is listed as printer of the 1623 First Folio edition of the collected works of William Shakespeare (and is listed in the colophon as one of the publishers).

As further evidence that the real author is concealed Carr points to the title page of the first Spanish edition of Don Quixote. The title page shows a hooded falcon resting on the gloved hand of a man who is hidden from view within a cloud. There is a lion in the picture that ostensibly symbolizes England. But who is the hidden falconer? On the border around the inner picture are the words, "Post tenebras spero lucem", i.e., after darkness I hope for light. Signaling yet again that something is hidden here. But how can we solve this dark puzzle? Chapter 68 of the Second Part of Don Quixote gives us a clue. Don Quixote tells Sancho Panza, "Post tenebras spero lucem", and follows the Latin words with a translation, "after darkness I expect light." It seems that the explanation has been added to help the reader, but Sancho still does not understand. The clue comes at this point. Sancho launches into a tribute to sleep, and this tribute is virtually a paraphrase of the speech about sleep in Macbeth (which appeared a few years before the publication of Don Quixote):

(As an additional connection to the Shakespeare works it can be noted that the "POST TENEBRAS LUX; after darkness light" legend also appeared on the 1600 quarto edition of A Midsummer Nights Dream, printed by James Roberts).

Moreover, Carr establishes a timeline that demonstrates that the manuscript of Don Quixote was in England long before it was published in Spain. The manuscript of the first part of Don Quixote was in England eight or nine years before the book was published in Spain, and the second part was translated and registered in London within a month of the date it was licensed for publication in Spain. It is hardly necessary to note the impossibility implicit in the notion that the second part of Don Quixote could have been sent to England from Spain, and then translated and made ready for the publisher, all in the period of one short month.

"Having translated some five or six years ago, the Historie of Don-Quixote, out of the Spanish Tongue, into English, in the space of forty days"

Carr shows this becomes even more suspicious when Thomas Shelton is put under the microscope. Carr says, "Who was Thomas Shelton? No one knows. Before and after the translation of the two parts of Don Quixote, he is an invisible man."

"I looked about to view whether I could perceive any Moore translated
Spaniard that could read them; nor was it very difficult to finde there
Such an interpreter…
I requested him to turne me all the Arabicall sheetes…
That treated of Don-Quixote into Spanish. I would pay him
What he listed for his paines…
He translated all the worke in lesse than a moneth and a half."

The time period given for the translation, Carr notes, is practically identical to the forty days given by Shelton for his translation of the book into English. Carr points that the period given strains credibility and was probably a deliberate ploy to move the reader to inquire further into the matter.

In his Preface to The Reader the author of Don Quixote says:

"I tooke often times my pen in my hand, as not knowing what I should write, and being once in a muse with my paper before me, my pen in my eare, mine elbow on the table, and my hand on my cheeke, imagining what I might write."

Carr notes that this seems to have been a habitual posture of Bacon since the memorial to Bacon erected by Sir Thomas Meautys in St Michael's Church, St Albans shows Bacon seated exactly as described in the preface to Don Quixote, and in the memorial Meautys describes this as the habitual posture of Bacon. Meautys tells us [He] "used to sit thus": 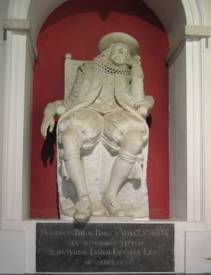 Carr finds in Don Quixote some 70 quotations, or expressions, that are identical or similar to those that appear in the works of Bacon, or Shakespeare, Carr notes that in his De Augmentis Bacon says:

"Dramatic poesy, which has the theatre for its world, would be of excellent use if well directed. For the stage is capable of no small influence both of discipline and of corruption. Now of corruption in this kind we have enough, but the discipline has in our time been plainly neglected. The action of the theatre, though modern states esteem it but ludicrous unless it be satirical and biting, was carefully watched by the Ancients that it might improve mankind in virtue; and indeed many wise men and great philosophers have thought it to the mind as the bow to the fiddle."

And in Shelton's Don Quixote we find the following:

"Comedie, as Tully affirmes, ought to be a mirrour of mans life, a patterne of manners, and an Image of truth. If wee would passé further to examine the divine Comedies that treate of God, or the lives of the Saints, what a multitude of false miracles doe the composers devise?

The auditour, having heard an artificiall and well ordered Comedy,
Would come away delighted with the jests, and instructed by the
Truths thereof; wondering at the successes, grow discreeter by the
Reasons, warned by the deceits, become wise by others example,
Incensed against vice, and enamoured of virtue; all which affects
A good Comedie should stirre up in the hearers minde, were he
Never so grosse or clownish…
It is not possible for the bow to continue still bent: nor can our
Humane and fraile nature sustaine it selfe long, without some
Helpe of lawfull recreation."

Immediately before going forth on his adventure where he encountered the windmill Quixote's barber, cook, and niece have thrown out and burned his books, and even blocked up and hidden the door to his library. His niece tells him that an enchanter who rode on a serpent, has destroyed the books. She says his name was Muniaton, but Don Quixote says he was Freston. Then when he goes he comes to a landscape where there are 30 or 40 windmills, but Quixote says they are really giants. Carr notes that near the village of Friston in Sussex, a village that was originally spelt as Freston is a figure of a giant, 227 feet high, known as the long Man of Wilmington, who according to one legend was the giant of Friston (Freston), nearby stood an old windmill, and there are a number of windmills in the neighborhood. Carr also notes that one of the traditional interpretations of the Long Man of Wilmington is that he is the Sun God, and that Muniaton can be interpreted to mean the wisdom-enhanced spirit of the Sun. So Carr says, "in the county of Sussex, in the south-eastern corner of England, only sixty miles from London, we are in a land of windmills, of giants, of old legends and tales of singlecombat." And he adds that nearby is a small, deep pool of clear water and that there was a legend that in ancient times a dragon, a creature of enormous size that had wings and looked like a serpent was wont to come forth from the depths of this hole and prey on the sheep in the neighboring areas.

Charles Fort, aficionado of the roads less traveled, named one of his books, The Book of the Damned, because, he said, the facts in the book were damned to be ignored and excluded by mainstream scholars and scientists. Who Wrote Don Quixote may or may not be a book of the damned, but it is certainly a damned interesting book. As Francis Bacon said, "Some books are to be tasted, others to be swallowed, and some few to be chewed and digested." Who Wrote Don Quixote is one of the latter.