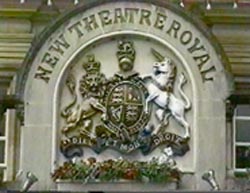 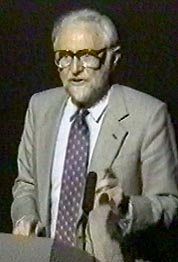 Stanley Wells defending his empire during the May 1997 Authorship debate at the NewTheatre Royal in Bath, England


"Stanley Wells is arguably the single most powerful authority on Shakespeare in the world, literally," said Ann Cook, Vanderbilt University professor of English and the only American lifetime trustee of The Shakespeare Birthplace Trust in Stratford-upon-Avon, England.Wells, who has lectured worldwide on Shake-speare, is chairman of The Shakespeare Birthplace Trust, vice-chairman of the Governors of the Royal Shakespeare Company and a member of the board of directors of the Globe Theatre. He is a frequent reviewer of Shakespearean productions for the London Times.

-Shakespeare For All Time-

".....Disputes about who wrote separate items pale in ferocity besides questions about whether William Shakespeare wrote anything at all.

In Shakespeare's Lives, Schoenbaum wrote on one hundred ironical pages, headed "Deviations," to attempts to prove that the works were written by over fifty candidates, ranging from Francis Bacon to Daniel Defoe...Marlowe is particularly implausible. The Earl of Oxford died in 1604.

These and similar theories are heavily publicized. Over the past fifteen years or so I have frequently been called upon in public debating places, ranging from a day long mock trial in the Middle Temple, where I was cross-examined by an eminent Q.C.(Shakespeare won the day) to a debate in the Theatre Royal, Bath, where the respective claims of Bacon, Marlowe and Oxford were aired. One began to get the feeling that it didn't really matter who wrote the works, so long as it wasn't Shakespeare. Fanaticism prevails.

Who knows what motivates the theorists? Is it snobbery, a belief that a man of relatively humble origin is less likely to have written the plays than an aristocrat? Is it the desire of ten minutes of fame? The media readily latches on to supposed news about Shakespeare. Or is it mere eccentricity, bordering on mental instability?"

All's Not Well that Stems from Stanley

"Thy sin's not accidental, but a trade." Measure for Measure

"These we call Idols of the Theatre, for we account all invented systems of philosophy as so many stage-plays, representing scenic and fictitious worlds.......Nor in this do we comprehend only the universal philosophies, but all principles and axioms of Knowledge which have thrived on tradition, credulity and negligence........"-Francis Bacon
__________

The intent of Mr. Wells' Shakespeare For All Time was to bring forth as much information as possible about the circumstances of Shakespeare's writing life and to tell the story of how he continued to exert influence after his death.

Stanley Wells, does not of course, find new evidence in Shakespeare For All Time. In fact no Shakespeare scholar has ever produced any evidence to support their theory that the Stratford man was a writer. Instead Wells speculates that Shakespeare spent as much time back home in Stratford where no source materials or a personal library have ever been discovered.

Stanley Wells, although a prolific scholar, refuses to acknowledge that an authorship issue exists. Yet authorities like himself can only point to themselves for this pestering problem. They cannot solve the authorship question with any convincing evidence because quite simply they have pegged the wrong man. Wells represents his own brand of fanaticism. It's the game of pretending to being right, trivializing debate, while not discussing the salient points of the case. This is the snobbery that Wells should be addressing.
The Shakespeare debate does not rest on whether or not a man of humble origins could be Shakespeare or if he was an aristorcrat. This is a smokescreen. The heart of the matter is exemplified by Francis Bacon's personal notebook written in his own hand called the Promus (Latin for storehouse). It resides in the British Museum and not one Shakespeare scholar has been able to adequately explain or comment why Francis Bacon entered hundreds of unique Shakespeare phrases into his Promus that eventually, years later, find their way into the published plays. Maybe Stanley Wells is considered " the single most powerful authority on Shakespeare in the world" because he's good at getting all his orthodox scholar friends (along with their publishers) to ignore the simple fact that William Shakespeare of Stratford, including his daughters, were illiterate folk ; while persuading the world to believe that the most famous illiterate man in history was capable of writing the most impressive literature in the world! Yes, this is a "powerful authority" at his best.

Stratford the town without shame

Wells also can't figure out that most skeptics of the William Shakespeare (Shaksper) man as author are motivated by the love of truth and want to see justice brought to the academic world and to the economic cash cow that exists in Stratford on Avon. Now here comes the real reason that lurks behind the mystery game of the Shakespeare Authorship which Mr.Wells has a vested interest. His fingers can be found in the cookie jar as chairman of The Shakespeare Birthplace Trust, a deceitful institution that defrauds the public on a daily basis. It's been known for quite a while that the birth home on Henley St. in Stratford on Avon was demolished along with all the other homes that once existed 400 hundred years ago. In Rowe's Life of Shakespeare written in 1709 there is no allusion to a Birthplace at all. And why is that? Because William Shaksper, Shagspur, however he wrote it, was not associated as a famous playwright while he was alive and so there was no need to commemorate or exploit the birth home of a nobody.
Edward D. Johnson in his The Shakespeare Illusion (1951) writes :

In 1769 David Garrick arranged a Jubilee celebration when there was a demand for a Birthplace for commercial exhibition, but at that time the Greenhill Street house had disappeared, so the the two tenements in Henley Street which John Shaksper had purchased in 1575 eleven years after his son's birth were seized upon, when a great blunder was made by choosing the house to the west which by no possibility could have been the birthplace because as Sir Sidney Lee states, " there is no evidence that John Shakespeare owned or occupied the house to the west before 1575.
In 1847, during a meeting held in Stratford it was decided to purchase the birthplace and a circular was got out appealing for funds. At this meeting one speaker wished to insert the word "probable" in the description of the cottages known as the Birthplace but he was howled down, because if the public were doubtful, the money for the proposed purchase would not be forthcoming."

The present Birthplace has been rebuilt from top to bottom. The Shakespeare Trust is cognizant of this historical fact but they have no compunction in charging credulous tourists a fee for the privilege of gazing at a room where a glorified tradition of illusion is maintained. But you have to hand it to them they have been successfully fooling the public since 1769 when David Garrick came to town laughing all the way to the bank after staging 'The Greatest Invention on Earth.' The public that patronizes the Stratford-fairy-tale-syndicate have lived up to Bacon's observation that,

"Men believe what they prefer,"

and need to heed his sobering point that :

" the contemplation of things as they are without error without confusion without substitution or imposture is in itself a nobler thing than a whole harvest of inventions."

Francis Carr points out that Mark Rylance the well known Globe Theatre art director and actor is mentioned briefly in the new book but his clear conviction that Bacon is the playwright is omitted by Wells. This standard operating procedure by Stratfordian authors comes with the turf as they prefer to ignore the viewpoints of the many fine 'anti-stratfordian' writers and thinkers. (Mark Twain, William H. Furness, Judge Nathaniel Holmes, Robert Theobald, Samuel Taylor Coleridge, Chief Justice Oliver Wendell Holmes to name a few). This is what Mr. Wells and his Birthplace Trust are good at surviving while convenietly overlooking that which is contrary to their 'official' charade while paying homage to The Tradition ;remembering to honor David Garrick's original blunder, and keep the one trick pony going as long

as making money off the lie can prevail. "Thy sin's not accidental, but a trade."- Measure for Measure
It's like an episode right out of The Sopranos . Furgettaboutit. 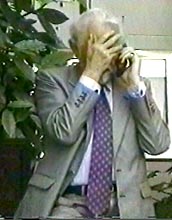 Stanley Wells on his cell phone outside the New Theatre Royal in Bathe maybe finding out
that he's taking a royal bath on the authorship debate?