The Troilus and Cressida Puzzle

Now let's move on to the real author of the plays,- Francis Bacon, and to a milieu that offers a real understanding of the anomalies associated with Troilus and Cressida. Since the Establishment emphatically proclaims the man from Stratford on Avon wrote the 'Shakespeare' plays, I am fully aware that I lay myself open to the charge of tarring myself with the same brush I have applied to the Oxfordians, but never mind, as far as my attitude goes, I stand rock bottomed and copper-sheathed with my good buddy, Alfred E. Neuman, "What, me worry?"

The late Louis B. Wright (a man with approximately the same relation to dumb as corn flakes has to breakfast cereal), erstwhile director of the Folger Shakespeare Library, thought (oops, maybe 'thought' is too strong a word) snobbery was the basic reason people refuse to believe the man from Stratford authored the plays. "These people", Wright ranted, "believe the author must have had a title, or some equally significant evidence of exalted social background". The snobbery idea works for me, not as Wright used it, but as far as associating myself with the Baconians, because, hey, let's face it: Baconians are a distinctly better class of people than the Stratfordians. You don't have to take my word for it. The man who has been hailed as 'one of the greatest minds of our time', and, 'the greatest theoretical genius since Einstein', remarked that the Stratfordians:

"don't seem to have the same kind of knowledge of facts and the depth of perception [as the Baconians]. They're mostly denying Bacon because-well-most people don't think so, therefore it is true. [they] are very defensive, often very superficial in their treatment of what is put out by the Baconians."

Thus spoke Arthur M. Young, a giant of our time: inventor of the Bell Helicopter, physicist, philosopher, writer, cosmologist, mathematician, and last but not least,- a confirmed Baconian.

Now we have the anomaly of the two quarto editions. The first says "The Historie of Troylus and Cressida as it was acted by the Kings Maiesties servants at the Globe", and this is immediately replaced by a second printing with "The Famous Historie of Troylus and Cresseid" without the "as it was acted by the Kings Maiesties servants at the Globe", but with the curious "Never writer to an Ever Reader" heading which states that this is "a new play, never staled with the stage, never clapper-clawed with the palms of the vulgar". In addition, we are told 6 times that the play is a Comedy in clear contradiction to the statement on the title page that says it is a History. What are we to make of this? It can be conjectured, of course, in the fumbling manner of the Stratfordians, that the statement on the first title page that the play was acted by the King's Majesty's servants at the Globe was realized to be in error and hence the title page was replaced by the second title page. But the lines written by I.C. in his Saint Marie Magdalens Conversion (1603) showed that the play was known to many:

"Of Helens rape and Troyes besieged Towne,
Of Troylus faith and Cressida falsitie,"

and that in all likelihood the play had been acted by the King's Majesty's servants at the Globe. This whole anomaly smacks of Bacon's observation in The Wisdom of The Ancients where, discussing the fables of the ancients he notes that it is an indication of a concealed meaning, "that some of these fables are so absurd and idle in narrations as to proclaim an allegory, even afar off", and, indeed, these absurd circumstances connected with the two quarto editions of are an indication of some concealed meaning. And this impression of some secret meaning is only increased some 14 years later when the other shoe drops and we find "The Tragedy of Troilus and Cressida" placed at the beginning of the tragedies in the First Folio. What's up with all this?

The anomaly that makes Troilus and Cressida a Comedy, History, and Tragedy at the same time has the clear implication that Troilus and Cressida is not alone in being modeled after Homer, but that this applies to the entire Comedy, History, and Tragedy design of the whole First Folio. This also explains why the play was not in the table of contents, because it did not belong under any one of the three separate divisions of Comedies, Histories, and Tragedies. This is emphasized by the number of scenes in Troilus and Cressida. There are 24, exactly the same number as the number of books in the Iliad and in the Odyssey. And the entire First Folio has the same design, 24 plays (12 comedies, and 12 tragedies). This allusion was engineered to give those who were sharp enough to catch it a heads up that they should look for important aspects of knowledge from the past concealed in allegory in the plays. It was also engineered to give those who were a little bit sharper a heads up that important aspects of knowledge from the future could be found in the play, and even knowledge from the present. In Bacon's time Homer was considered the greatest of all poets, Chaucer was the greatest of all English poets, and Troilus and Criseyde was his Masterpiece. So the allusion Bacon makes is that he is the greatest of all English poets, and that he models his play, and the entire First Folio after Homer.

The allusion here is to Sonnet 80, which is the first reference to the 'Greater Poet', who, it turns out, is Homer:

O, how I faint when I of you do write,
Knowing a better spirit doth use your name,
And in the praise thereof spends all his might,
To make me tongue-tied speaking of your fame.
But since your worth, wide as the ocean is,
The humble as the proudest sail doth bear,
My saucy bark, inferior far to his,
On your broad main doth willfully appear.
Your shallowest help will hold me up afloat
Whilst he upon your soundless deep doth ride;
Or, being wracked, I am a worthless boat,
He of tall building, and of goodly pride.
Then if he thrive, and I be cast away,
The worst was this: my love was my decay.

The next reference to the 'Greater Poet' in the Sonnets is found 6 Sonnets later in Sonnet 86. We have noted two reference to '6' in the anomalies associated with Troilus and Cressida. There was a period of 6 years that lapsed between the first record of Troilus and Cressida and the date it was printed. And when it was printed the "Never Writer, Ever Reader" advertisement referred 6 times to it as a Comedy. There is evidence that Roberts, who was then aged 62, was beginning to withdraw from business as early as 1602. Could it be that Roberts had no intention of publishing the play, and the entry in his name was engineered merely to bring the 6 into the mix of anomalies? The first references to the 'Greater Poet' in the Sonnets is in Sonnet 80, the next reference occurs 6 sonnets later, in Sonnet 86:

Was it the proud full sail of his great verse,
Bound for the prize of all-too-precious you,
That did my ripe thoughts in my brain inhearse,
Making their tomb the womb wherein they grew?
Was it his spirit, by spirits taught to write
Above a mortal pitch, that struck me dead?
No, neither he, nor his compeers by night
Giving him aid, my verse astonished.
He, nor that affable familiar ghost
Which nightly gulls him with intelligence,
As victors, of my silence cannot boast;
was not sick of any fear from thence.
But when your countenance filled up his line,
Then lacked I matter, that enfeebled mine.

There was an idea, current at the time, that Homer was taught by the ghosts of dead poets. This is clearly shown in the engraving on the title page of Chapman's Odyssey of Homer, where Homer is shown in the center with ghosts on either side who give him instruction: 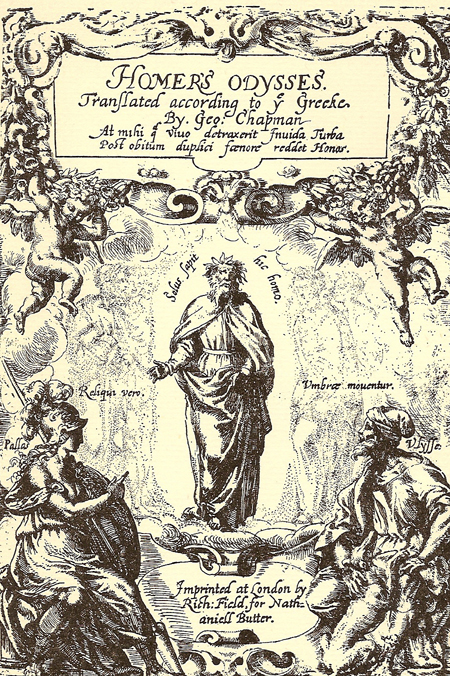 The Sonnets have a curious design. There are allusions in various of the Sonnets that indicate Sir Walter Raleigh was the author. There is other evidence that points to Bacon as the author. In 1589, when Raleigh was away from court, he and Bacon got together and gave a virtuoso performance of composing verse, a skill at which both were supreme masters. This provides a possible basis for their collaboration on the Sonnets. The Sonnets, then, would have a threefold sequence similar to Troilus and Cressida :

Both Bacon and Homer are indicated as the 'greater poet' in the Sonnets. Bacon was accustomed to dictating his works the first thing after awakening in the morning. And it may well be that among those who knew him best there was a suspicion that he, like Homer, had compeers by night, affable, familiar ghosts which nightly gulled him with intelligence. Another interesting feature of the Sonnets is that they were dedicated to Pallas Athena. It is not only the title that tells us this ( Shake-Speare's Sonnets) it is also the specific address to Pallas Athena in the Sonnets:

Be thou the tenth Muse, ten times more in worth
Then those old nine which rhymers invoke

In antiquity the epic singers tended to regard themselves as merely the mouthpiece of their muse, and to submerge their personal identity in hers. There is an insinuation that Pallas Athena was the muse of Homer just as she was the muse of Bacon. It was believed in ancient times that Homer was able to provide all the special knowledge that the details of his works required because his muse gave him this knowledge. In The Arte of English Poesie, written by Bacon (although the idiots who make up the ranks of the orthodox scholars attribute the work to George Puttenham) special reference is made to Homer's muse, and to how he gained his specialized knowledge of all the various special fields of knowledge shown in his works. Bacon asks, "How was it possible that Homer, being but a poor private man, and, as some say, in his later age blind, should so exactly set forth and describe" so many type of specialized knowledge? And the answer he gives is that Homer was able to do this through the divine furor of his muse.

The precise and meticulous design of all the plays in the First Folio demolishes the idea of orthodox scholars, who have swallowed hook, line, and sinker, the disinformation put forward at the beginning of the First Folio that the plays were provided by John Heminge and Henrie Condell, and that there is no particular order or design to the plays other than that of Comedy, History, and Tragedy. The precise arrangement and design of the First Folio could only have resulted from the direct supervision in the printing of the author himself Francis Bacon. Not that any of this would have any weight with the current orthodox literary and academic professionals who are involved in the 'Shakespeare' matter. In this case it is no imposture at all, but a sober insight that tells me that as long as these people are in the saddle they will continue to have their head stuck firmly up the horse's rectum.