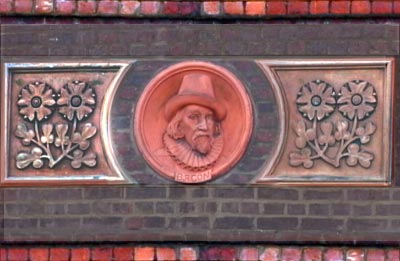 image can be seen downtown in St. Albans

Bacon's Connection
to
the Printing of the 1623 Shakespeare Folio

In the latter part of Bacon's life, the steward of his estates was William Tottel. He is also described as "A Six Clerk in Chancery."

This William Totell was the son of the famous Elizabethan printer, Richard Totell, master of the Stationers' Company in 1579. He had a patent for the printing of law books, and also published inter alia the famous Tottel's Miscellany, or Songes and Sonnets written by Henry Howard, late Earle of Surrey, and others (1557). He took as apprentice John Jaggard. When Tottel retired, Jaggard took over his shop at the Hand and Star in Fleet Street. William Tottell, in 1591, was acting as "dealer for his father," presumably in the capacity of liquidator, as Richard Tottel had retired. John Jaggard entered into partnership with his brother William, who published Bacon's Essays in 1597. John published the editions of 1612 and 1613. In 1618, Bacon interested himself in a petition which John Jaggard presented, partly on behalf of poor stationers of London, and partly on behalf of himself. It would not be suprising if William Tottel had persuaded Bacon to use his influence.

The Shakespeare Folio of 1623 was "printed by Isaac Jaggard and Edward Blount." Isaac was the eldest son of William. We have thus a connection between the Tottels, the Jaggards, Bacon and Shakespeare. William Jaggard also published The Passionate Pilgrim by W. Shakespeare, 1599.

see : The Private Manuscript Library of Francis Bacon, Lord Verulam, and of his Law-clerk and Servant William Tottel
****