As author, I would like to offer the reader some insights into this unusual work of fact-based fiction and its companion volume providing evidence and arguments supporting the storyline The Companion to Shaker of the Speare: The Francis Bacon Story. 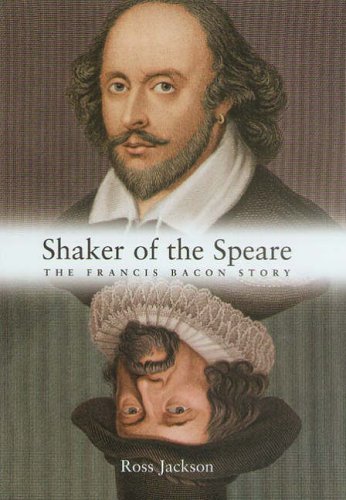 The novel reveals the dramatic and little known story of Francis Bacon's life, including the secret of his birth as son of Queen Elizabeth and potential heir to the throne and his authorship of the Shakespeare works. This authorship claim is a controversial one, and by no means accepted by the literary establishment, which has its own reasons for sticking with the Stratfordian as author. Nevertheless, I think that most readers, if they approach the subject with an open mind, will be convinced that Bacon did it by the time they have read both books.

Much of the evidence was suppressed for national security reasons and to protect the reigning monarchs of the time Elizabeth I and James I. Some of the most convincing evidence first appeared long after the deaths of the principals, some as late as 1998, as the musty contents of old state archives in England, France and Spain, and new analyses of Shakespeare's and Bacon's works entered the public domain for the first time. So it is not surprising that most people still believe that the man from Stratford wrote the works. I believed this myself until I investigated the matter just a few years ago. It is, after all, the traditional story we are told in school. For 200 years, no one really paid much attention to the authorship question, with the one major exception mentioned below.

The controversy over the authorship of the Shakespeare works has raged fiercely for the last 150 years, bur actually goes all the way back to 1598 when only three works had been published under the William Shakespeare name, and both Bacon and Shakespeare were in their thirties. Two of London's leading literary critics, Marston and Hall, claimed already at that time that Francis Bacon was the true author, writing under a pseudonym. Their publications were ordered burned by Bacon's former tutor, the Archbishop of Canterbury, to protect Francis Bacon and send a powerful signal to others in the know not to disturb the wishes of the potential heir to the thrown to remain a "concealed poet".

If this is true, then who was William Shakespeare, the man from Stratford-on-Avon? Most readers will be surprised to learn that very little is known about him. The hard evidence that is known shows that he was a small-time moneylender, bit actor and investor in the Globe Theatre, and quite likely illiterate. That is about it! A long list of sceptics, including many well-known persons, has, for over 150 years, claimed that he is not credible as author. Why? For example, not a single letter written by or to William Shakespeare has ever been found, nor is there any record of him ever receiving payment for a play or knowing any nobleman, or even having a library. But he had a name that perfectly fitted the requirements of Francis Bacon, whose muse since his teen years had been the novel's namesake Pallas Athena, the spear-shaking Greek goddess, patron of the Arts and Sciences (a fact first documented in 1903). Of course, Pallas Athena was also the muse of Shakespeare as recounted in the sonnets.

Bacon had to write under a mask because he was the love child of Queen Elizabeth and Robert Dudley, who were secretly married, as was well known by Elizabeth's inner circle and the courts of France and Spain. As potential heir to the throne, his very life and Elizabeth's crown were in mortal danger if the truth were to become widely known.

I claim that the greatest work of literature in the English language is nothing less than the life story of this giant of a man, thus providing us with a far richer interpretation of the Shakespeare writings. As we follow Bacon through the dangerous rapids of Tudor high politics, conspiracy, love, betrayal and death, the material for the plays and sonnets plays out before us. Indeed, the works are the story of his life. In the novel, I have tried to match some of Shake-Speare's Sonnets with particular events in Bacon's life, and find some of the correspondences spine-chilling.

When all is said and done, it is up to each reader to make a personal judgement on the questions of Bacon's royal birth and the Shakespeare authorship based on the evidence at hand. In making a judgement, some sound advice from Francis Bacon himself may be helpful to the reader. He writes:

"If a man will begin with certainties,

He shall end in doubts.

But if he shall be content to begin with doubts

He shall end in certainties."

However, the novel is about much more than the Shakespeare works. Many historians have unfairly put a stain on Francis Bacon's name due to incomplete and misunderstood information related to his sensitive position as heir to the throne and to the circumstances of his fall from power. In reality, he was one of the greatest men in history a multi-talented genius, leading philosopher, his country's most respected parliamentarian for over 30 years, an eloquent orator, a professor of law, adviser to two monarchs, Attorney General, Chief Justice and Lord Chancellor, as well as being secret spiritual master in the Rosicrucian and Freemason movements. He was an island of integrity in a sea of corruption, a role model for any age.

After reading this myth-shattering novel and The Companion, it is my hope that the reader will have a much better appreciation, not only of the Shakespeare works, but of Francis Bacon, whose last will and testament requested "foreign nations and the next ages" to cherish his name and memory.

Readers are also welcome to visit my website www.ross-jackson.com for excerpts from my writings, and to visit www.gaia.org for further background..

Europe: The easiest way for most persons is probably to access Amazon UK.

USA and Canada: The easiest way for most persons is probably to access Amazon Canada (The books are not available on Amazon.com because of their rules regarding non-American publications).

Alternatively for North Americans, several offers are available at Abebooks. Just click here and do a search under "Shaker of the Speare" to find the best offers on both books. You may want to check out Amazon UK also.

Note: Some bookstore sites have been confused by the similarity of the two titles and have incorrect information on their sites regarding these books. I recommend that you double-check the ISBN before ordering (For Shaker of the Speare the ISBN is 18577694-14; For The Companion the ISBN is 18577694-65).