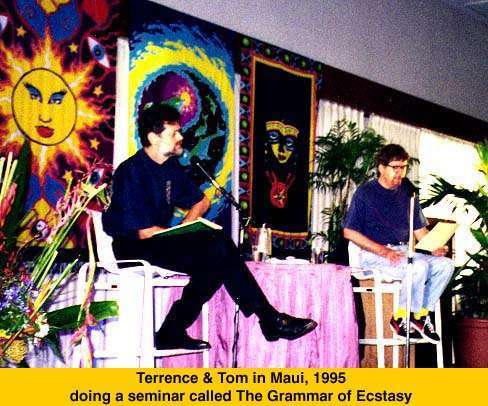 From my downtown Seattle apartment, a number of provocative neon signs are visible, silently reciting them selves like lines from a hot, jerky poem. Above the entrance to the Champ Arcade, for example, there flashes the phrase LIVE GIRLS, LIVE GIRLS, LIVE GIRLS, a sentiment that never fails to bring me joy, especially when I consider the alternative. Less jubilant, though more profound, is the sign in the dry cleaner's window. It reads simply,

ALTERATIONS, but it always reminds me of Terence McKenna-not merely because Terence McKenna is a leading authority on the experiential aspects of mind-altering plants, or because his lectures and workshops have altered my own thinking, but because Terence, perhaps more than anyone else in our culture, has the ability to let out the waist on the trousers of perception and raise the hemline of reality.

Scholar, theoretician, explorer, dreamer, pioneer, fanatic, and spellbinder, as well as ontological tailor, McKenna combines an erudite, if somewhat original, overview of history with a genuinely visionary approach to the millennium. The result is a cyclone of unorthodox ideas capable of lifting almost any brain out of its cognitive Kansas. When Hurricane Terence sets one's mind back down, however, one will find that it is on solid ground; for, far from Oz-built, the theories and speculations of McKenna are rooted in a time-tested pragmatism thousands of years old. Many of his notions astonish us not because they are so new, but because they have been so long forgotten.

As the title, The Archaic Revival, implies, McKenna has found a key to the future in the dung heap of the past. (It is entirely appropriate to note that psychoactive mushrooms often sprout from cow pies.)

During the European Renaissance, scientists, artists, and enlightened citizens turned back to a much older Greek civilization for the marble sparks with which to ignite their marvelous new bonfire. In more than one place in this collection of essays and conversations, McKenna is urging that we turn back-way, way back-to Paleolithic shamanism, to retrieve techniques that not only could ensure our survival, but could assist us in mounting a fresh golden age: in fact, the golden age, the one toward which the plot of all history has been building.

McKenna doesn't consider himself a shaman, although he has studied with shamans (and drunk their potent potions) in Asia and the Amazon. He says, however, that he is attempting "to explore reality with a shamanic spirit and by shamanic means." Indeed, the shaman's rattle buzzes hypnotically throughout these pages, although it is sometimes obscured by the whoosh of UFOs, for McKenna's imagination (and expertise) ranges from the jungle to hyperspace, and only a dolt would ever call him retro.

Here, let me squirt a few drops of Terence's essence into the punch bowl, so that we might sample the flavor and chart the ripples:

"My vision of the final human future is an effort to exteriorize the soul and interiorize the body, so that the exterior soul will exist as a superconducting lens of translinguistic matter generated out of the body of each of us at a critical juncture at our psychedelic bar mitzvah.
The purpose of life is to familiarize oneself with [the] after-death body so that the act of dying will not create confusion in the psyche. I don't believe that the world is made of quarks or electromagnetic waves, or stars, or planets, or any of these things. I believe the world is made of language.There is a hidden factor in the evolution of human beings which is neither a "missing link" nor a telos imparted from on high. I suggest that . . . [the] factor that called human consciousness forth from a bipedal ape with binocular vision involved a feedback loop with plant hallucinogens.

Right here and now, one quanta away, there is raging a universe of active intelligence that is transhuman, hyperdimensional, and extremely alien.... What is driving religious feeling [today] is a wish for contact [with that] Other.

I scoured India and could not convince myself that it wasn't a shell game of some sort or was any more real than the states manipulated by the various schools of New Age psychotherapy. But in the Amazon . . . you are conveyed into worlds that are appallingly different .. . [yet] more real than real."

These tiny sips from McKenna's gourd, served out of context and stripped of his usual droll garnishes, are nevertheless intoxicating and, to my mind, nourishing.In larger gulps, his brew may even heal the ulcers through which the modern world is bleeding.

Our problems today are more complex and more threatening than at any time in history. Sadly, we cannot even begin to solve those problems, because our reality orientations are lower than a snowman's blood pressure. We squint at existence through thick veils of personal and societal ignorance, overlaid with still more opaque sheets of disinformation, thoughtfully provided by the state, the church, and big business (often one and the same). The difference between us and Helen Keller is that she knew she was deaf and blind.

Radical problems call for radical solutions. Conventional politicians are too softheaded to create radical solutions and too fainthearted to implement them if they could, whereas political revolutionaries, no matter how well meaning, ultimately offer only bloodshed followed by another round of repression.

To truly alter conditions, we must alter ourselves philosophically, psychologically, and, perhaps, biologically. The first step in those alterations will consist mainly of cutting away the veils in order that we might see ourselves for that transgalactic Other that we really are and always have been. Terence the Tailor has got the sharpest shears in town. And he's open Sundays and holidays. Once the veils are severed, we, each of us, can finally start to attend to our self-directed mutagenesis.

The flying saucer is warming up its linguistic engines. The mushroom is shoving its broadcasting transmitter through the forest door. Time for the monkeys to move into hyperspace! It's going to be aweird, wild trip, but, guided by the archaic,Gaia-given gyroscope, we can commence the journey in a state of excitement and hope. With his uniquely secular brand of eschatological euphoria, Terence McKenna is inviting us to a Doomsday we can live with. Be there or be square.

During the Prophets Conference, I feel that while attending Tom Robbin's talk, I was in the presence of a True human being... a Real human being (for a change). Thanks Tom. billy mallery 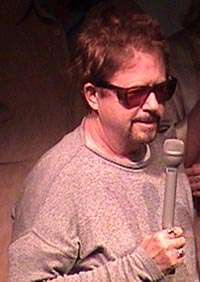 Author TOM ROBBINS spoke in Santa Fe to open some cans of pork and beans during the weekend of June 7-9, 2002 at the James A. Little Theater as a faculty member of The Prophets Conference Santa Fe: Poets, Mystics, Magicians.

Tom Robbins has been called "a vital natural resource" by The Portland Oregonian, one of the wildest and most entertaining novelists in the world by the Financial Times of London, and "One the most dangerous writer in the world today" by Fernanda Pivano of Italy's Corriere della Sera.

"Tom Robbins has a grasp on things that dazzles the brain and he's also a world-class storyteller."-Thomas Pynchon

When asked to submit an abstract for his Santa Fe presentation, Tom responded with his presentation title, "Cat on a Hot Tin" Paragraph: Our Lives Are Novels and Reality Is Made of Words. He also submitted the following as his presentation preview.

"The tin can was invented in 1811. The can opener wasn't invented until 1855. In the intervening 44 years, would-be consumers had to access their pork and beans with a hammer and chisel.

Suspecting mainstream literature not to mention orthodox religion, psychoanalysis, Marxism, consumerism, academism, and 99 per cent of self-realization techniques to be a collection of dull chisels and rubber hammers, my aim (unrealistic perhaps) has been to try to write novels that might function as can openers in the supermarket of life.

Or (changing metaphors in midstream), I could say that my goal has been to twine ideas and images into big subversive pretzels of life, death and goofiness, on the chance that they might help keep the world lively and give it the flexibility to endure.

Some time ago, I reached the conclusion that we are in this existence to enlarge our souls, light up our brains and liberate our spirits. Pondering the role that language, imagination, humor, sexuality, risk, attitude, spirituality, and altered states of consciousness play in that process is what keeps the little feet running in my hamster cage.

It's probably unnecessary to point this out, but I wish to make it clear that I'm neither a New Ager nor an Old Ager, neither a prophet nor a guru, but rather, just another glad fool on the left-handed path: dodging the ego, romancing the Mystery, spilling the wine, and, above all, celebrating language, that magical reticulum of words into which human reality is forever dissolving and from which it continually reemerges, having invented itself anew. The noun in the lotus. The jewel in the inkwell. Green dolphins leaping from a sink of dirty dishes."