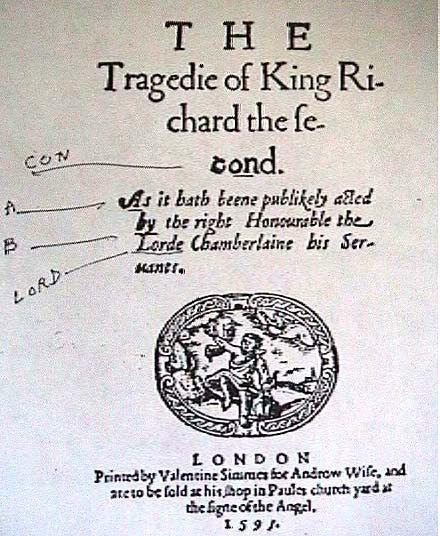 Facsimile Title-Page of Richard II , the name William Shakespeare did not appear on this 1597 title-page.
Henryetta Lewis, a long time Baconian researcher points out that it is quite odd that the title was split with two hyphens, when it need not have been required. Either the printer was inefficient or it was carefully planned out so that an acrostic from down up would read : Lorde bAcon
______

Edward Johnson writes that Wil Shaksper asked to be given a house at Stratford after he was packed off to Stratford as a safeguard when Queen Elizabeth became infuriated over Richard II because the play renounced the divine right of kings. In 1597, the Queen sought to discover the author with the intention of bringing him to the rack. In 1598 a new quarto edition of Richard II appeared with the name "William Shake-speare" on the title page. (The pseudonym Shake-speare relates to the Greek goddess Pallas Athena, with her spear, the divine symbol of wisdom and power and the patroness of learning.) Shaksper was given 1000 pounds and New Place (which formerly belonged to Lady Anne Russell, who was Francis Bacon's aunt) and told to lie low, which he did until after Queen Elizabeth's death. Bacon knew Will Shaksper at the theatre and in his dilemma came to an arrangement to use his name as the author, even though Bacon had used the signature William Shakspeare before he had ever heard of the actor. Bacon wished to be certain that Shaksper was going to keep his part of the bargain, so New Place was not formally transferred to Shaksper until some years afterwards.

Bacon and the Queen regarding Richard II :

In an early number of Baconiana, a writer showed that whole pages of The Annals of Tacitus were used in Richard II. The play was staged in 1597, during the Essex Rebellion and before , and Bacon, at the trial of Essex makes the cryptic remark: "It is said I gave in evidence mine own tales." All these indications point to Bacon's connection with Richard II. In the Northumberland Manuscript, Richard II and Richard III are listed. It is also generally accepted that the two Shakespeare plays, Richard II and Richard III were removed from the manuscript.