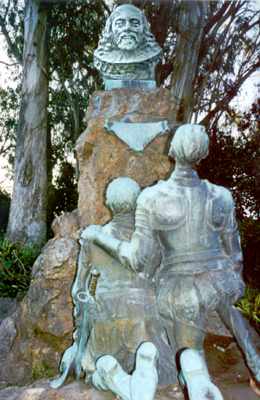 King James offered to confer the honour of knighthood upon Francis, who replied that he wished it would be done in "a way to grace him." He did not desire to be knighted as one of a crowd. Francis had, however, to suppress his princely fastidiousness. On the 23rd of July he was knighted as one of a batch of 300.

With the acession of King James there was peace between England and Spain.

Francis had in manuscript a book of the "Jack Wilton" class, in which he wished to hold up to ridicule the practices of duelling, tournaments, and knight-errantry. They were forms of militant lunacy which afflicted that age. But they were beginning to be ridiculous--heavily armoured knights bestriding slow placed old carts horses and charging with easily broken spears.

The book could not be printed in England or at all while his militant mother, Queen Elizabeth, was alive. She revelled in tourneys, at any rate. Spain was a suitable country for the publication of a book of this kind, and a poverty stricken Spanish writer of unsuccessful plays named Cervantes was employed to co-operate and to act as the pseudo-author.

Francis had probably seen the prose poem "Gallathea" which Cervantes printed in 1584, and, to judge by what is said in "Don Quixote,"did not think much of it. Shelton, a courier to Spain in the employment of Lady Suffolk
(the correspondent of the King of Spain at the English Court), was doubtless used as intermediary for carrying the manuscript to Spain, but friend Gondomar, then living at Valladolid (where the Royal Court was held and Cervantes also resided), probably conducted the negotiations with Cervantes. This poor man was lodged in two miserable rooms, and the less said about the conduct of certain female relatives residing with the better.

The Spanish version of "Don Quixote" was put into type in May, 1604, and printed in 1605, but so badly that it had to be revised in 1608. The Spanish seems only half the size of the English version, known as the Shelton translation, 1612 and 1620, but people in Spain seem to have been so assured that Cervantes was not the author that it was pirated right and left. Indeed, in the Preface Cervantes is made to say that he was not the father but only the stepfather of "Don Quixote," and that the actual author was one"Cide Hamet Benengili," who wrote in Arabic. Francis, whenever he wished to do so, fooled people to the top of his bent. Of course, as the late Mr. Hutchinson pointed out: For "Cyde" read "Sir,"for "Hamet" read "Bacon," and for "Benengili" read "of England."

The name of Muley Hamet, the Ambassador from Barbary, and the appropriateness of Hamet as a cryptic name for "Bacon," had not missed the author's notice.

The curious things is, that while Cervantes was extravagant in praise of his undisputed works, he spoke (to use the words of Louis Viardot, the eminent French critic) of "Don Quixote" "with modesty, almost with embarrassment."

The first part of "Don Quixote" is very much of the "Greene" and "Nashe" type of novel introducing short stories, "Curious Inpertinent," "Cardenio," and "The Captive's Tale." "The last named," said Mrs. Oliphant, "was not Cervantes' personal history." A play of "Cardenio," since lost, was performed before the English Court in 1613.

When Mosely desribed the play in 1653 he stated that its authors were Shakespeare and Fletcher. There is a story alluded to in "son Quixote" (though not incorporated) called "Raconnette and Cortadillo," which printed in Cervantes' "No Exemplares," which fact tells perhaps against the view that Francis was the sole author. As "Raconnette" and one other of the Cervantes' short "example novels" are rated as of so much higher quality than the others, Francis may have revised them for Cervantes. But he was without any doubt the writer of the Shelton translation, 1612-1620, which is said "to reproduce in robust phraseology the spirit of the original." Yet the "Pleasant Notes upon Don Qixot," 1654, by Gayton (adopted son of Ben Jonson), and the free translation of "Don Quixote," issued in 1687 by John Phillips, a nephew of John Milton the poet, hint at much more than this.

The first of these books gives the "Fra Rosicrosse" numerical sign 287 in the address, and ends on page 287, which page gives the sign in another way--viz.,the 341 roman type words on the page less the 54 words in italics.

The name of Cervantes is not mentioned in Gayton's book. But the 111 letters under the words "Don Quixot" indicate "Bacon" in K cipher, and the clipped word "Quixot" in simple count comes to 100, which is Francis 67 and Bacon 33. The first complimentary verses end with the lines:

"Your Clavis makes this History to be
The unveiled Cabala of Chivalrie."

At page 95 are the lines "Look on thy Don, The Shakespeare of the Mancha."

The Phillips' free translation of "Don Quixote" os also full of significance. No author's name is on the title page, but in its first square(as bounded by printers' rules) are exactly 33 roman words; 33 is the simple numerical equivalent of the letters in the name "Bacon."

The second page of the "Epistle to the Reader" gives the 287 sign, so does the last page.

The Dedication of the Shelton translation gibes 239 words in Roman type and 45 letters in italic type, and three small words in the heading, to which attention is drawn by asterisks. They thus total 287. The author's Preface has 157 words in roman type; 157 is the simple count of the letters in "Fra Rosicrosse."

Cervantes' "Sancha Panca," like Nash's "Jack Wilton" and Shakespeare's "Christopher Sly," would "not pay one denier." Panca says, "Let the world wagge." Sly says, "Let the world slide." Panca makes use of the expression "My deare Sir," which is to be found also in the Shakespeare play of "King John"--viz., "My deare Sir. Thus leaning on mine elbow I begin." In Jack Wilton" we have, "When I sate leaning on my elbow."

In the Preface to Shelton's "Don Quixote" there is the phrase: " My pen in mine eare, mine elbow on the table, and my hand on my cheek;" and in the text: "Lay his elbow on the arme of his chair and his hand on his cheek."

That is precisely the pose of the effigy of Bacon in the chancel of St. Michael's Church, Gorhambury. 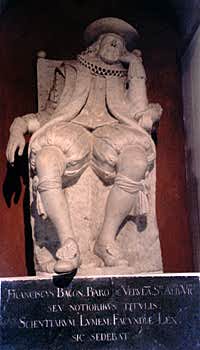 The idealized statue to "Shakespeare," erected in Westminster Abbey in 1740, also has a " leaning on the elbow" pose. All these circumstances are very curious and invite enquiry; particularly as, invested in the motley of a mad visionary and of a dull clown, discourses are delivered upon educational subjects of great interest to Francis Bacon such as poetry, duels, liberty, office, great place, clothes, laws, love, marriage, and death. Moreover, the views of "Piers Pennilesse" on stage-plays are re-echoed by the Canon in "Don Quixote."

Already more has here been said about this authorship than may have been prudent, bearing in mind Bacon's observation in his Essay of Praise:

"Too much magnifying of man or matter doth irritate contradiction." But the question of this authorship needs carefully looking into, and the internal evidence for the proposition that Francis wrote the original "Don Quixote," and had it translated into Spanish, is very strong.

It will be interesting if it can be established that the youth who wrote "Don Simonides" in 1581 wrote "Don Quixote" when he had reached the top of his literary powers.

The tumble down old steeds that were used in the performances at tilt on Queen Elizabeth's birthdays would well suggest Rosinante, and it is believed that the true rendering of "Don Quixote" is
"D' on qui s' ote," or " Of one who would withdraw himself."

It is surmised that the name "Sancha Panca" was intended to indicate a man who never thinks before speaking.