Followed by a rebuttal by Lawrence Gerald

THIS SUNDAY is Easter Sunday, but it also happens to be the birthday of William Shakespeare. A Hamlet and eggs kind of day.

I think it will be fitting that we all have the day off on Shakespeare's birthday, since he is the person whose works have become the standard against which all serious writing is measured, and I've always felt the occasion should be observed annually with some sort of celebration. Perhaps a free pizza for anyone who writes for a living.

It might be belaboring the obvious to say that Shakespeare is in a class by himself. There are writers, and then there is Will.

His contributions to the language, alone, would probably be enough to guarantee enshrinement. We're constantly quoting him -- using expressions like "dead as a doornail" and "the naked truth" -- often without realizing we're doing it. But it is his craftsmanship that has made him a literary immortal. The literary immortal.

I'VE ALWAYS felt that Shakespeare's plays read better than they perform. I may be biased because I make my living as a writer. If I were an actor, I might not feel that way. But I've seen a lot of Shakespearean plays, and with a few exceptions -- like Hamlet and King Lear -- they seemed to have been attacked by a bunch of actors bent on shouting and spitting out their lines as fast as they could. I suppose that much of this can be attributed to the actor's desire to get the dialogue out before he or she can forget it, since Will's stuff is wordy and requires prodigious memorization. But the end result often seems to be full of sound and fury signifying the fear of drawing a mental blank. In reading Shakespeare, though, you can take your time, drifting along, savoring his flair for exactly the right word, his skill at revealing character, and his astounding aptitude at analogy.

THERE ARE some people bent on denying Shakespeare his birthday, claiming that he is a fiction, or that, if there really was such a person, he didn't write those plays. The authorship of the plays has been variously ascribed to a whole boatload of writers, with Francis Bacon being the one most frequently mentioned by the conspiracy lovers.

My own feeling is that, if there had been a National Enquirer back in Will's time, these people would have been charter subscribers. I'll go along with Thomas Burnam, who thinks that "a belief in Bacon's -- or anyone else's -- authorship of Shakespeare's plays is akin to a belief that the world is flat or that the moon is made of green cheese." The Baconians will grasp at just about anything to make their point, however.

The longest word in any Shakespearean work is honorificabilitudinitatibus, which appears in Love's Labours Lost. Several years ago, a dedicated Baconian -- a professor at the University of Illinois -- announced that this was a code word Bacon had created, and that it could be anagrammed into the Latin sentence:

... which translates roughly (very roughly) into:

THESE PLAYS, THE OFFSPRING OF F. BACON, ARE PRESERVED FOR THE WORLD.

I imagine the Illinois prof may have felt pretty good about his exercise in historical detection -- until Orson Welles came along and noted that honorificabilitudinitatibus could be anagrammed into something else, too:

IDIOTIC RUBBISH IN LATIN AT U. OF I. 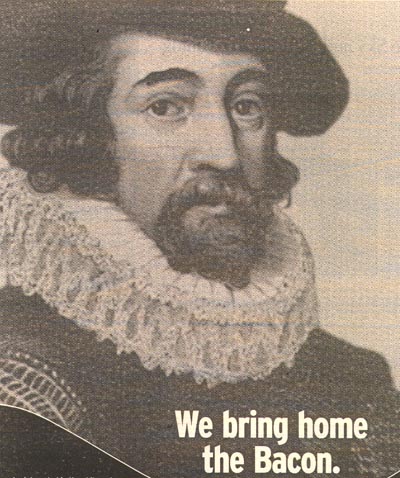 Bacon and Eggs :Why

Francis Bacon is Our Bard

"I am a sort of haunted by the conviction that the divine William is the biggest and most successful fraud ever practised on a patient world." --Henry James

"Truth can never be reached by just listening to the voice of an authority."-Francis Bacon

If Ray Orrock is content to cynically rest his case on why hundreds of sincere scholars over the last century including Mark Twain (he was really Samuel Clemens Ray) have been championing Francis Bacon as Shakespeare based on one nonsense word in Love's Labours Lost, 'honorificabilitudinitatibus', which could be construed as an anagram, so be it. This "dead as a doornail" type of reasoning reveals a lack of knowledge about the subject. The 'naked truth' is that this long word is found in the collected papers of Francis Bacon in the British Museum. It's as illogical to reduce a mountain of evidence to a simple point as it is absurd to say we went to the moon for the cheese. The use of trivializing and ridicule are two of the last weapons that the orthodox Stratfordians are left with in order to defend a position that they themselves find hard to believe in, yet remain completely irritated that they have to be told who 'their Bard' is by some 'heretics' called Baconians.

"In the British Musuem (Harleian Collection No. 7017) is Francis Bacon's Promus, or Notebook,containing some 1,600 notes jotted down between the years 1594-6. All these notes are in Bacon's own handwriting. The book is a storehouse of turns of expression, which Bacon could draw upon for use in his literary work. Among other things, it contains 203 English proverbs.

Regarding Shakespeare's contribution to the English language, Edward Johnson points out that :

"It is said that a common farm labourer uses 500 words, and educated business man 3,000, the average novelist 5,000 and great scholars and public men 7,000. "Shakespeare" in his poems and plays uses 21,000, the largest vocabulary ever possessed by any member of the human race.

With the exception of "Shakespeare's" Francis Bacon's vocabulary was the greatest ever known, and Dr. Samuel Johnson, the great lexicographer, said that "a Dictionary of the English language might be compiled from Bacon's works alone."

Is it a coincidence that "Shakespeare's" vocabulary, which is the largest ever attained by any man in any language at any time, is equalled only by Francis Bacon's in its extent and richness?

Mark Twain had a great interest in who wrote Shakespeare throughout his life and sided with Bacon as the true author. He was aware that he was attacking a cultural icon when his final book, Is Shakespeare Dead? appeared in 1909. Twain observed that many people (he called them 'Troglodytes.') would rather cling to their beliefs about Shakespeare's identity as a writer than face the facts that were being brought to light in his day. Twain was fond of saying that, "the Classics are what everyone has an opinion on but haven't read it themselves." Mr. Orrock's opinion towards the authorship issue reminds me of Twain's comment. He can appreciate the Shakespeare plays including reading a play or two; yet when it comes to actually doing any serious reading on the authorship issue, he obviously has forsaked his objectivity to being another Troglodyte. 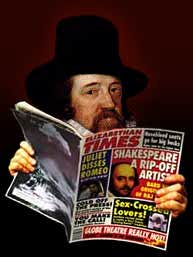