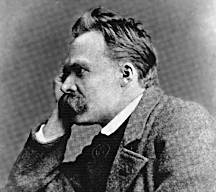 Under the title "Nietzsche, France and England" Mrs. Elizabeth Forster Nietzsche, deserving editor of the works of her great brother and curator of the Nietzsche archives in Weimar, published on the 11th of June 1916 a long article in which this gifted and eminent writer, true rearer and guardian of Nietzsche to whom the history of German literature owes so infinitely much, discusses among other things particularly the relationship of Nietzsche to "Shakespeare."

Nietzsche, if one draws up the sum of all his notes, had a deep antipathy toward England. This the more remarkable because in his youth and throughout his entire life he had preferred Shakespeare to any other poet, apart from perhaps Byron.
"Continually," so writes Mrs. Forster Nietzsche, " he (Nietzsche) was likening Shakespeare to a mine filled with immense quantities of gold, lead and boulders, and was exemplifying his highest problems, (the other of precedence of Will over Force and of Supermen) and teachings in the granite forms of his works. It is one of Shakespeare's characters that he loved and admired most. Only a few weeks before he was taken sick he wrote down these words. :

"If I seek my highest formula for Shakespeare, I always find that he has conceived his type of Caesar"."The tragic friendship relation that Brutus had with Caesar he found the most astounding that was ever written; to him Shakespeare had dedicated his best tragedy. Independence of the soul-that is here the remarkable thing. No sacrifice can be too great : one's dearest friend must one be able to sacrifice to it i and be thereby the most noble of men, the ornament of the world, the genius without an equal- if, that is, one loves freedom as freedom does great souls and danger menances this freedom-in some such way must Shakespeare have felt.
The heights on which he places Caesar are the finest honor he, Brutus, can pay; so first does he raise his internal problem to its enormity and as well the strength of his soul that was able to cut these knots." Nietzsche always believed that Shakespeare had endowed Caesar with an inexpressible something, some event or other, unkown, staying in the dark, or some adventure out of the poet's own soul and recollection."

"So that it became this tragedy directly which led my brother to believe that the poet whom we call Shakespeare is pehaps indeed Lord Bacon."

So much for Mrs. Forster Nietzsche.

Friedrich Nietzsche, however, actually went much further than Mrs. Forster Nietzsche believes, since in his "Ecce Homo" he says expressly :

"We are all afraid in the face of Truth; and while I recognize that I am instinctively certain and sure of this, that Lord Bacon is the creator, the self-torturer of this most gloomy sort of literature......"

"Long are we without adequate knowledge of Lord Bacon, the first realist in every great sense of the word; what he has done, what he has desired, what his experiences have been....And to the devil with you, Messrs. critics! Suppose I had baptized my "Zarathustra" under a strange name, for instance, that of Richard Wagner, and the sagacity of two centuries had not been sufficient to guess that the author of " human, all too human," the visionary of Zarathustra is.......!"

Made aware of this conviction spoken with such force and firmness, Mrs. Forster-Nietzsche writes in a letter addressed to this author on the 29th of June 1906 :

"What he (Nietzsche) says in"Ecce Homo" has certainly become his firmest conclusion."

These words which Mrs. Forster-Nietzsche cited as the verdict of her great brother on the hidden connection of Bacon-Shakespeare with Brutus and Julius Caesar come from "Happy Science"(La gaya Scientia") No. 98, " On the Fame of Shakespeare."
Besides the words quoted, Nietzsche goes on to say at this point :

"And was it really political freedom which drove his poet to compassion for Brutus-brought him to complicity with Brutus? Or was political freedom merely a symbol for something else that could not be expressed? Do we stand before some happening or other, unkown, staying in the dark, some adventure out of the poet's own soul, of which he might speak through symbols only? We might here say, for fear of his life, dared to speak only in symbols!"
What is all Hamlet's melancholy?, continues Nietzsche, "compared with the melancholy of Brutus!-and perhaps Shakespeare knew this too, as we knew that, out of experience!"

Yes indeed! Surely Bacon-Shakespeare also knew Hamlet's melancholy out of his most personal experience, and truly the fine thrilling tragedy of Hamlet is the death tragedy of Queen Elizabeth, of her actual (although not officially recognized and later disowned) husband of many years, the all-powerful lord marshall, Robert, earl of Leicester, and his unfortunate, vigorous, martial and princely son who, under the cuckoo name of Earl of Essex, in reliance upon the people whose idolized darling he was, thought to gain by force his right to the throne at the head of three hundred nobles, arms in hands, but was defeated and like Hamlet in the public jousting of a court of law was malicioulsy and murderously struck with poisned weapons.
Bacon-Shakespeare, as Horatio, was left behind to tell the world this sad tale.
This is the secret of the Hamlet melancholy which Nietzsche in his great mind in such sharp sighted and extremely striking way recognized, although the exact connection (from the state of the Bacon-Shakespeare inquiry in that day) could not be so clear to him as is the case today.
Other, and really of a still more deeply touching sort, is the Brutus melancholy suspected by Nietzsche.

"had his dark hours and evil angels, like Brutus! But whatever of that sort of similarity and common relations it may have yielded, Shakespeare before all that figure and virtue of Brutus, threw himself to earth and felt himself unworthy."

" The testimony of this he has written in his tragedy. Twice in it has he brought forward a poet and twice has poured upon him such impatient and utter scorn that it resounds like a shriek."

"Knows he (the poet) the time, so know I his moods-away with the belled clown!" cries Brutus. One translates this bit back to the soul of the poet who wrote it."

In many a play of Shakespeare, behind the clown, the poet Bacon himself lurks!
Altogether rightly did Nietzsche suspect that Bacon is the author of the heart rending, blood soaked Plays known to the world under the pseudonym "Shake-speare"; likewise mistrust in the tragedy "Julius Caesar" some dark event relative to Bacon's life, with which the Stratford strawman and farmer certainly had not the least connection, since in the historically accepted figure of Caesar and of Brutus, self-conceived for the purpose, Bacon has poured out in secret, half-intimated, half- concealed fashion his personal, historical, enduring experiences in the trial of Essex, in which Bacon by a threat to his life was compelled by the queen to take part in the indictment of his unfortunate brother and afterwards outwardly as a matter of form to plead her cause-a procedure of which his collected Plays without exception in thousands of instances yield overwhelming proof's, that leap forth to the view of every keen sighted and unprejudiced person.
With his strong mind Nietzsche surmises Bacon's relationship to his brother, friend and contemporary Essex, the idolized hero, the people's darling, who strove for crown and the people's favor, whom the idea represented in "Richard the Second" swept forward, like a second Bolingbroke, to force the unseating of his mother and his mounting of the throne. For years Bacon had vainly endeavored to hold Essex back from his purpose of insurrection; of this the correspondence in the collection of letters, "Cabala sive Scrinia Sacra" of the year 1663 and other incontestable, strongly historical proofs exist. In vain he counseled him to let the ostrich feathers (the heraldic feathers of the Prince of Wales) grow instead of vulture feathers (the feathers of rebellion), since otherwise he must, like Icarus, with broken wings, fell into the sea. Essex ran head on like a true hard headed Tudor scion into his misfortune and Bacon, forced against his will to pass his judgment on the publicly known rebels, must, a second Brutus, with bleeding heart pronounce the verdict of death upon his beloved brother Essex- Caesar. One of the severest death wounds which befell Essex was assuredly the verdict of his brother Bacon, as Caesar felt most painfully the dagger blow of Brutus. This is the frightful secret of the Brutus melancholy of Bacon-Shakespeare, which Nietzsche's mind prophetically surmised but is only just now fully disclosed.
With a letter addressed in 1888 to Professor Dr. George Brandes in Copenhagen, Nietzsche sends him his "Happy Science" in which expression is given to the foregoing observations.
It is of interest to learn how Professor Brandes, who was the first to hold lectures at the university in Copenhagen on Nietzsche's philosophy, which up to that time had been systematically treated with silence, and to whom Nietzsche for this reason was personally grateful, stood on this point.

In the writing addressed to Nietzsche from Copenhagen on the 3rd of April 1888 Professor Brandes writes :

"A couple of pedantic corrections : Happy Science, page 118, you speak of the heights on which Shakespeare places Caesar. I find Shakespeare's Caesar contemptible. A les-majeste! And this glorification of the miserable fellow (Brutus) who knows nothing better than to stick a knife into a great man!"

To this coarse opposition to his opinion Nietzsche in his letter of reply from Turin on the 10th of April 1888 (very likely for the personal reasons mentioned) has made no answer, and has surely done right therin, since with the conception which Professor Brandes had with respect to the Stratford farmer had vaunted theatre agent, with his gross lack of understanding of the Brutus melancholy, Nietzsche's highly intellectual comprehension, going down to the ultimate psychological reasons, so little harmonized that every word of Nietzsche would indeed have been too many.
In an article appearing in a daily newspaper, "The Times" on the 3rd of May in Vienna, under the heading "New Shakespearean Discoveries," we come upon Professor Brandes, the scholar so exceedingly worthy in other spheres, once more, sad to relate, on the Shakespeare-Bacon question so unfortunately taken in hand by him.

Professor Brandes here, to be sure, complains that the Copenhagen papers are beginning to go over the position of the Baconians and no longer are wont to accept Shakespeare articles of the Stratfordian trend so willingly as was once the case.

Surely this gratifying circumstance ought to have warned Professor Brandes to a certain amount of caution, because the educated public of Vienna in its scepticism of Stratford is beginning to approach suspiciously that of Copenhagen.
Nevertheless the miserable fiasco of the Wallace research arranged for the occasion of the so called tercentenary of the Stratfordian, has not deterred Professor Brandes from lauding the already reviewed documents in the "Mountjoy-Bellot" barber case, with the dot as sole "Shaksper signature" and some similar newly barbered "documents" as magnificent "New Shakespearean Discoveries" and thereby in customary style serve up the worn out folder-role about "Bacon madness," "Bacon bacillus" and the like, when at the best it can be only a question of a " barber bacillus."
An excellent opportunity to answer Professor Brandes is offered by the present discussion of the relation of Friedrich Nietzsche to Bacon-Shakespeare, on which Nietzsche corresponded personally, even if somewhat one-sidedly, in 1888 with Professor Brandes, to a certain extent of his own accord.