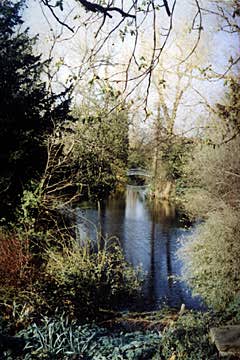 I have here an idle pen or two.... I pray send me somewhat else for them to write out.... From my Lodge at Twickenham Park,
Your entire Loving Brother,
Francis Bacon, in a letter dated January 25, 1594, he wrote to Anthony Bacon

The view above shows the remains of a canal leading to the Thames that Bacon used to travel on to Gray's Inn from Twickenham Park.

In 1593, while attending Gray's Inn Law School and suffering from economic difficulties, Bacon was granted Twickenham Park, by the Queen, a villa on 87 acres, opposite the Queen's Tudor Palace at Richmond. From her window the Queen was able to watch any improvements Bacon made upon the property and at the same time be in close proximity to Francis so she could keep her eye on her son and know what he was up to. And what was he up to? Forming an intentional writers community and perhaps the greatest literary achievement the world has ever seen! 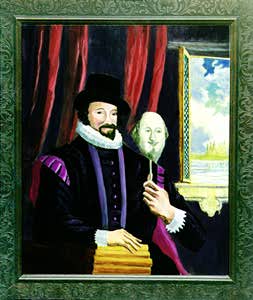 The story of Love's Labor's Lost concerns a youthful King of Navarre and four of his courtiers, the Lords Dumaine, Longaville, Berowne and Boyesse and four ladies of the court. The drama contains a real life love affair that existed between Francis Bacon and Marguerite de Valois (the daughter of Catherine de Medici and King Henry of Navarre) when he was visiting France in 1576-8. The names of the four Lords are taken directly from the passport of Anthony Bacon when he was living in the Navarre territory (1583-92) The names are signed Dumain, Longaville, Biron(Berowne) and Boyesse. This can be verified in the British Museum where the document exists. This is never mentioned by Shakespeare 'scholars' even though it links Anthony Bacon with these four names with those of the four characters from the Shakespeare play.
The play also reflects Bacon's great interest in Freemasonry with numerous references to Masonic rites and rituals of the higher degrees. For more on the historical references of the Bacon brothers experience and the Shakespeare Play Love's Labor's Lost read The Great Vision, by Peter Dawkins.

Francis Bacon wrote and employed writers at Twickenham in what he called his Lodge. This was the setting for a writing school or Scriptorium and one of the most important arrangements which Francis spearheaded. A small gathering of students wrote under his guidance various essays for the distribution of knowledge as well as taking down his constant revisions. These "good pens" as Bacon called them , scattered various learned writings under different names throughout England, marked sometimes with a Rosicrosse-Mason Mark, which was sought for by Freemasons and understood by them, according to Alice Chambers Bunten. (Francis Bacon and Twickenham Park)

Alfred Dodd makes the point that,"that the "Good Pens" at Twickenham were used to stimulate public opinion, to create an interest in reading and writing, and above all, to manufacture the illusion of a widespread Renaissance."

Twickenham Park must have been very close to the heart of Francis Bacon as a home of memories connected with his studies and experiments of many kinds, for in sealed paper discovered after his death is an instruction to one of his private secretaries, named Thomas Bushell for the purpose of buying Twickenham Park. He writes:

"Let Twickenham Park, which I sold in my younger days, be purchased if possible, for a Residence for such deserving persons to study in. I experimented there for the trial of my philosophical conclusions. This wish I expressed in a paper sealed to the Trust, which I myself would have put into practice and settled the same by Act of Parliament, if the vicissitudes of Fortune had not intervened and prevented me."

This makes it clear that one branch of his studies at Twickenham revolved round trials of his philosophical conclusions which were the "tryouts" of his newly created Rituals of the Higher Degrees, and this is confirmed by the fact that these Degrees are mentioned in Love's Labour Lost. There were other experiments of course, but that some of them were Masonic is beyond question."

In a manuscript book called The Promus, now in the British Museum, a collection of witty sayings and proverbs in many languages, written in Francis Bacon's own hand, there are dates 1594-5 which make it certain that this collection was made in these years. In this notebook there is a mysterious and significant reference to his concealed labours as a poet, to what he elsewhere terms, "The Works of his Recreation," for he writes, "Ye Law at Twicknam for Mery Tales." It is therefore quite clear that about this time Francis Bacon and his lawyer-friends---"The Law"---had gone there in connection with "Merrie Tales." There has been much speculation what he meant by them and we can for the moment but speculate what these tales were. But we are brought appreciably nearer the goal by a singular coincidence in the Initial Capitals used in Love's Labour's Lost , the first eight lines of the Play (Folio, Comedies,p.122),

"F. Et. LAW Th at T" which unmistakably are legitimate contractions for "Francis and the Law at Twicknam," an echo of the Promus note.

The inference is that Love's Labour's Lost was one of the "Mery Tales." And when we know, as every Mason does--or ought to do--that this Play embodies the genesis of the Craft, the natural conclusion is that among other things Francis and his friends were trying out some of the Rituals of the Higher Degrees. ( see: Shakespeare, Creator of Freemasonry, by Alfred Dodd)