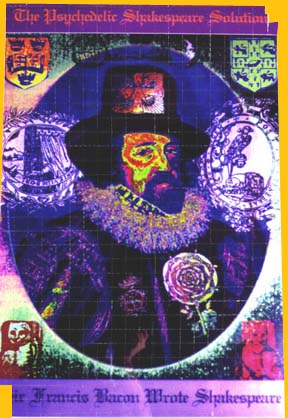 A few years ago I was walking in the Village in N.Y.C. on West 8th St off 6th Ave. and I came across a storefront called the "Psychedelic Solution." The place is known for it's marketing psychedelic posters and related art. Across the street at the time was a restaurant specializing in hamburgers called, "Shakespeare's". The two business titles rang a bell in my mind. Here were two of my great interests in life, psychedelics and Shakespeare in direct line of vision of each other and on the same block. The 'synthesis' of the two has been my path to explore in this life.

Psychedelics have opened my mind and given me direct experiences of myself, shattering old notions and belief patterns of what is identity, while producing breakthroughs leading to a clean slate, a tabula rosa if you will.

Everything You Know is Wrong

With Shakespeare, the more I learned about the man and subject, the more I was having to keep an open mind to believe in something impossible. That an illiterate man whose own daughter had to mark an X on her marriage certificate, who hadn't left one letter or book behind except five poorly written signatures (pertaining to legal matters only) was what the experts want

us to buy into. I heard that Harry Truman said that experts were people who were afraid to learn anything new in their fields of expertise out of fear of not being seen as experts. This to me sums up the the many so called authorities (Stratfordians) on the Shakespeare legend whose preference is the continuation of a few facts parlayed with shoddy research that's being passed on to sucessive generations in the name of truth. There are publishers in the Shakespeare industry that encourage them and enjoy maintaining the myth- that the man William Shakespeare of Stratford upon Avon was responsible for the whole canon of plays and sonnets yet he could barely write his own name!

Next to God there is Shakespeare. Who dares to question the patron saint of literature? Leave it alone so that we can be left with the hope that any common person who who doesn't have an educational background could become another Shakespeare too.

Those who question the illusion are called heretics, and they are kept at a distance, and their facts belittled and swept under the rug. Stratfordians have never issued a point by point rebuttal. They can't and they know they can't because they don't have any facts to back up their lies. All they can do is pretend that the 'Emperor is wearing his clothes.' "We have the plays," they repeat, "Isn't that enough?" This is the attitude of most academic and Shakespearean institutions. 'Dose 'em Dano!' Their logic is also being based on the idea that the word Shakepeare appears on the name of the plays so therefore it must have been written by him. This is what we like to call the 'Betty Crocker theory'. You see the name 'Betty Crocker' appearing on your box of cake mix so that means that Betty Crocker personally made it!

Let's look at the words Willian, Shakespeare, Psychedelic and Solution.

William is from the German, Wilhelm, meaning the helmet of.

The word Shakespare is from Greek Mythology. It is derived from the Goddess Pallas Athena nicknamed the spearshaker, depicted with a spear or lance brandishing it at ignorance and tryranny. She is depicted wearing a helmet for protection that was used to capture Medussa.

Psychedelic is pertaining to or causing extra ordinary changes in consciousness. Derived form the Greek word psyche, meaning the personification of soul and delic meaning visible or to manifest. Psychedelic simply put is the revealing or manifesting of the soul.

Solution is the act of solving , clearing up, resolving a problem, coming to a conclusion, the act of dissolving or state of being dissolved.

In summary the Psychedelic Shakespeare Solution is the making visible the soul mission of the Goddess Athena in order to dissolve ignorance.

Francis Bacon wrote over 400 years ago that for man to know himself he had to break away from conditioning and tradition which he called the Four Idols, The Idols of the tribe, Idols of the Cave (an allusion to Plato's cave allegory), Idols of the Market Place, and the Idols of the Theater. These are false ideas or classes of ideas in the mind which act as obstacles to the attainment of truth. Bacon's analysis of these ideas is not only similiar to the Hindu concept of maya but it still serves to instruct us in today's age as a valuable tool for those interested in any search for truth. Also Bacon's emphasis on the use of inductive logic established today's scientific method for inquiry.

Here's what Bacon had to say:" ....So much concerning the several classes of idols and their equipage. All must be removed and put away with a fixed and solemn determination and the understanding thoroughly freed and cleansed. The entry into the Kingdom of man , founded on the sciences, is not very different from the entry into the Kingdom of Heaven, where into none may come except as a little child." --The Novum Organum, 1620

Bacon rejected Aristotle's logic that leads to dualistic either or thinking, and dogmatic philosophy which he saw as useless theories for action and being adverse to the search for truth. In a sense our society is still working out the philosphical problems caused by Aristotilian logic that splits the mind-body , encourges overspecialization vs. comprehensive knowledge which eventually leads to foolish governmental spending on ideas that fail in getting to the root of our problems.

With all this in mind, we return to the 'Psychedelic Shakespeare Solution'. For interested researchers who want to know the truth about Shakespeare (Francis Bacon) it's necessay to approach it like a scientist. You have to recognize and clear your mind of any inherited bias you bring to the table. It is truly shocking to find out that there is another identity behind Shakespeare and it completely challenges what we were taught in school. To even consider that Bacon was not only the author to Shakespeare but also the author behind Don Quixote is very heavy to our belief systems. Yet if you look at the evidence you'll see we have all been bamboozled. Mark Twain once said, "The classics are what everyone comments on but haven't read themselves." Cervantes says right at the beginning of the Author's Preface to the reader that he is not the author. "But I though in shew a Father, yet in truth but a step-father to Don Quixote." Later the protagonists bring up the authorship of their story as if to transcend the novel itself while creating an almost out of book experience by announcing that the author is Cid Hamete Benengeli. This is not mentioned once but over thirty three times to over embellish the point. Yes,there is a 'Grassy Knoll' even in Don Quixote and the English professors all over academia are NOT talking about it. Why don't they? The answer reverts back between Bacon's Four Idols and Harry Truman's experts. Everything you know is STILL wrong. When time dissolves the Stratford myth we will see how the story of who wrote Don Quixote elucidates Shakespeare and how Shakepeare elucidates Don Quixote. A very curious fact that should forever keep us on our toes is that Cervantes and Willy Shaksper died on the very same day April 23,1616 one in Spain and the latter in England. This is a CLUE to look deeper. 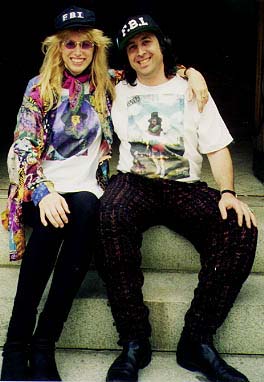 How To Become an F.B.I. Agent

In order to become an F.B.I. agent, a Francis Bacon Investigator, it is necessary to do the following. Just say Know, question authority, and do inductive reasoning. 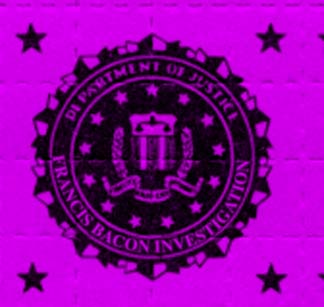