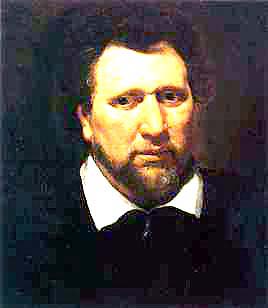 "I have and do reverence him for the greatness that was only proper to himself, in that he seemed to me ever, by his works, one of the greatest men, and most worthy of admiration that has been in many Ages."--Ben Jonson in tribute to Francis Bacon

In Ben Jonson's Discoveries (1641) he gives Bacon the highest praise, and describes his writings in these peculiar words:

"He who hath filled up all numbers and performed that in our tongue which may be compared or preferred to insolent Greece and haughty Rome....so that he may be named as the mark and acme of our language."

Bacon is here compared to Homer and Virgil in the same words that Jonson used about the author of the Shakespeare Folio in 1623:

"Leave thee alone for the comparison
Of all that insolent Greece and haughty Rome....
Sent forth.... "

"He who hath filled up all numbers," acknowledges Bacon's versification during Elizabethan days such as sonnet, madrigal, blank verse and even cypher numbers. Ben Jonson, the editor of the Shake-speare Folio, is telling posterity in this eulogy from his significantly entitled "Discoveries" that : Francis Bacon is Shakespeare.

(Excerpted from The Knights of the Helmet by Martin Pares)

"There was one famous contemporary of Lord Bacon, a great and original writer himself, a man of moods and satire, seldom given to lavish praise of others, who acknowledged Bacon to be his "chief." This man was Benjamin Jonson. If ever there was a man of genius, full of suprises, it was Ben. He combined the strangest mixture of coarseness and delicacy. As a private soldier in the Low Countries he challenged and killed with his own hands a champion from the enemy camp; later he killed a fellow actor in a duel. He drank heavily at times, and it is not impossible that Will Shakspers' decease -- after that famous "merry meeting" -- was the end of a similar feud. And yet Ben Jonson could write, not only in Latin. not only ribald plays, but some of the loveliest lyrics such as the extravagant, "Drink to me only with thine eyes."

In 1618, if not before, he became closely acquainted with Bacon, and by 1620 he was living with him at Gorhambury as one of the"good pens that forsake me not." Archbishop Tenison in his "Baconiana"1679, p.60 testifies that Ben Jonson was Bacon's secretary.

Ben Jonson is generally cited as the principal witness for William Shakespeare, has now been called on behalf of Francis Bacon. His various utterances over the entire period when the Shakespeare plays were coming out are puzzling to say the least of it.

The eulogies in which he indulged in the first Shakespeare Folio were official, a kind of command performance.

Would that Ben Jonson if he could arise from his square foot of earth in Westminster Abbey and tell us why his two greatest contemporaries never mentioned each other; for to him the answer was assuredly known. The mask-like countenance depicted in the First Folio is rejected by Ben Jonson with the plainest of hints. . . . "Reader look, not on his picture but his book."

This Figure, that thou here seest put,

It was for gentle Shakespeare cut;

Wherein the Grauer had a strife

with Nature, to out-doo the life :

O, could he but haue drawne his wit

As well in brasse, as he hath hit

His face ; the Print would then surpasse

All, that vvas euer vvrit in brasse.

But, since he cannot, Reader, looke

Not on his Picture, but his Booke.

Ben Jonson, after Shakespeare the most eminent writer for the Elizabethan stage, was born in 1573, and died in 1635. He was the founder of the so-called "Comedy of Humours," and throughout the reign of James I was the dominating personality in English letters. A large number of the younger writers were proud to confess themselves his "sons." Besides dramas of a variety of kinds, Jonson wrote much lyrical poetry, some of it of the most exquisite quality. His chief prose work appears in his posthumously published "Explorata, Timber or Discoveries, made upon men and matter", a kind of commonplace book, in which he seems to have entered quotations and translations from his reading, as well as original observations of a miscellaneous character on men and books. The volume has little or no structure or arrangement, but is impressed everywhere with the stamp of his vigorous personality. The following passage on Bacon is notable as a personal estimate of this giant by the man who, perhaps, approached him in the field of intellect more closely than any other contemporary.

One, though he be excellent and the chief, is not to be imitated alone; for never no imitator ever grew up to his author; likeness is always on this side truth. Yet there happened in my time one noble speaker who was full of gravity in his speaking; his language, where he could spare or pass by a jest, was nobly censorious.(1) No man ever spake more neatly, more presly,(2)more weightily, or suffered less emptiness, less idleness, in what he uttered. No member of his speech but consisted of his own graces. His hearers could not cough, or look aside from him, without loss. He commanded where he spoke, and had his judges angry and pleased at his devotion.(3) No man had their affections more in his power. The fear of every man that heard him was lest he should make an end.

Scriptorum catalogus.(4) - Cicero is said to be the only wit that the people of Rome had equalled to their empire. Ingenium par imperio. We have had many, and in their several ages (to take in but the former seculum (5) Sir Thomas More, the elder Wyatt, Henry Earl of Surrey, Chaloner, Smith, Eliot, B[ishop] Gardiner, were for their times admirable; and the more, because they began eloquence with us. Sir Nico[las] Bacon was singular, and almost alone, in the beginning of Queen Elizabeth's times. Sir Philip Sidney and Mr. Hooker (in different matter) grew great masters of wit and language, and in whom all vigor of invention and strength of judgment met. The Earl of Essex, noble and high; and Sir Walter Raleigh, not to be contemned, either for judgment or style; Sir Henry Savile, grave, and truly lettered; Sir Edwin Sandys, excellent in both; Lo[rd] Egerton, the Chancellor, a grave and great orator, and best when he was provoked; but his learned and able, though unfortunate, successor(6) is he who hath filled up all numbers, and performed that in our tongue which may be compared or preferred either to insolent Greece or haughty Rome. In short, within his view, and about his times, were all the wits born that could honor a language or help study. Now things daily fall, wits grow downward, and eloquence grows backward; so that he may be named and stand as the mark and "akun"(7) of our language.

De augmentis scientiarum.(-8) - I have ever observed it to have been the office of a wise patriot, among the greatest affairs of the State, to take care of the commonwealth of learning. For schools, they are the seminaries of State; and nothing is worthier the study of a statesman than that part of the republic which we call the advancement of letters. Witness the care of Julius Caesar, who, in the heat of the civil war, writ his books of Analogy, and dedicated them to Tully. This made the late Lord S[aint] Alban (-9) entitle his work Novum Organum; which, though by the most of superficial men, who cannot get beyond the title of nominals,1(-10) it is not penetrated nor understood, it really openeth all defects of learning whatsoever, and is a book

[Footnote 8: Concerning the advancement of the sciences.]

"My conceit of his person was never increased toward him by his place or honors. But I have and do reverence him for the greatness that was only proper to himself, in that he seemed to me ever, by his work, one of the greatest men, and most worthy of admiration, that had been in many ages. In his adversity I ever prayed that God would give him strength; for greatness he could not want. Neither could I condole in a word or syllable for him, as knowing no accident could do harm to virtue, but rather help to make it manifest."

For more on Ben Jonson visit these pages :

Ben Jonson and the 1623 Shakespeare Folio

Acrostics in Ben Jonson's Every Man Out of his Humour

From his book Discoveries

comments can be sent to lawrencegerald@hotmail.com