William Herbert was a close personal friend of Francis Bacon to whom the Shake-speare Folio of 1623 was dedicated, along with his brother Phillip, the Earle of Montgomery.In 1623 his title changed from Earle of Pembroke to Lord Chamberlaine. His two titles can be seen in the 1623 Folio dedication. 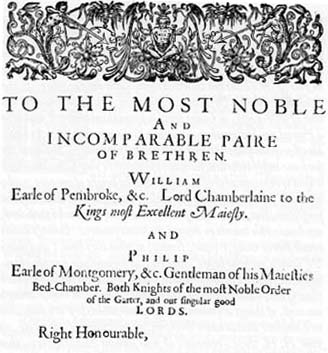 Alfred Dodd, an English Mason stated in "The Martyrdom of Francis Bacon" that "the printing is so arranged that the "MOST" and "AND" spell the word "Mason". We thus know that Pembroke and Montgomery were," Brethren in Masonry and our Singular Good Lords." The Folio was dedicated in a Masonic sense to Freemasons. To an informed Freemason he is honored because he was one of the early Grand Masters of Freemasonry.....created and founded after Francis Bacon's return from France in 1579. We know this from letters that are passed between Francis Bacon and Professor Gabriel Harvey that the Craft degrees were in being in 1580. The Earle was nearly twenty- one years of age when he suceeded to the Earldom in 1601.(after the death of his father) He was well known at Court; and in 1603 King James and his court were entertained by him for two months....owing to the plague in London. He had a literary mind and many works were dedicated to him. In 1623 he was the Lord Chamberlain and "exercised supreme authority in theatrical affairs." He appears to have consorted with literary men." Bacon and Herbert were keenly interested in England's advancement in the new world and both contributed to the founding and charter of the Virginia Colony.

It is very plausible that William Herbert was also the mysterious MR. W.H."the onlie begetter' of the Shakespeare Sonnets. A begetter means someone who occasions or originates and in this instance the dedication implies that MR. W. H. was a man responsible for the sonnets being writtten and published.It was quite natural that Bacon would give honor to his friend by dedicating his book of sonnets to him. Edward Johnson claims that sonnets 1 thru 17 were all addressed to William Herbert. Dodd however disagreed with this and wrote, "the identity of "Mr. W.H." was quite well known to Elizabethan Freemasons. It was used in speech as cover to denote Francis Bacon. It stood for "Mr. William Himself." ( see Dodd's "The Personal Poems of Francis Bacon")

It should also be noted that in Herbert's private theatre at Wilton, Measure for Measure was first performed , with speeches introduced to incline the king's heart to mercy, at a time when he and his Court were awaiting the trial of Sir Walter Raleigh.

Today, within theWilton estate, visitors can find a Shakespeare statue (close up of scroll) and a bust of Francis Bacon.

"When Queen Victoria was staying at Wilton House, the Earl of Pembroke told her that in the muniment room was a document which formed written evidence that in 1560 Elizabeth I married the Earl of Leicester. The marriage was performed in secret oath of absolute secrecy. At the time of that marriage the Queen was pregnant by Lord Leicester. The French and Spanish ambassadors reported this and the death of Amy Robsart to their Courts. They also told the Queen that if this was confirmed by her marriage to Leicester, France and Spain would jointly invade England, to remove the Protestant Queen and replace her by a Catholic monarch. Queen Victoria demanded that this document should be produced, and, after she had examined it, she put it on the fire, saying, "one must not interfere with history."
This information was given to me by the 15th Earl of Pembroke, the grandfather of the present Earl.&emdash Andrew Lyell