This is another Bacon title page. Again we see that it relates to the author of the plays.
Our proofs pile up. 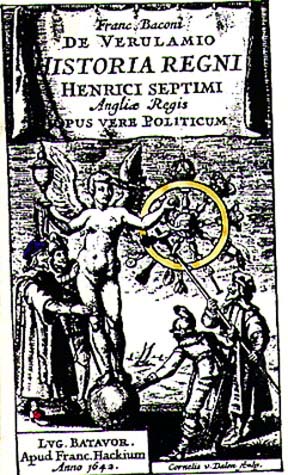 Sir Edwin Durning-Lawrence's interpretation: Let us examine 'the title page that forms the frontispiece of Bacon's Henry VII in the Latin edition, printed in Holland in 1642. This forms, with the 1645 edition of the De Augmentis, one of the series of Bacon's collected works which were continually reprinted for upwards of a hundred years. In this title page of Henry VII we see the same 'left-handed' story most emphatically repeated. On the right of the engraving -- the reader's left -- upon the higher level Francis Bacon stands in the garb of a philosopher with grand Rosicrucian rosettes upon his shoes. By his side is a knight in full armor, who, like himself, touches the figure with his right hand. On the left' side of the picture upon the lower level we see that the same Francis Bacon, who is now wearing actor's boots, is stopping the wheel with the shaft of a spear which the 'left-handed' actor grasps (or shall we say "shakes"), while with his 'left' hand" he points to the globe. This actor wears one spur only, and that upon his 'left' -boot, and his sword is also girded upon him 'lefthandedly'. Above this 'left-handed' actor's head, upon the wheel which the figure is turning with her 'left' hand, we see the emblems of the plays; the mirror up to nature (observe, the crossed lines to which we called attention in reference to the crossed lines upon the book in the title page of the De Augmentis, 1645) -- the rod for the back of fools - 'the bason that receives your guilty blood' t (see 'Titus Andronicus v.2) which is here the symbol for tragedy, and the fool's rattle or bauble. That the man is not a knight, but is intended to represent an actor, is manifest from his wearing actor's boots, a collar of lace, and leggings trimmed with lace, and having his sword girded on the wrong side, while he wears but one gauntlet and that upon his 'left' hand. That he is a Shakespeare actor is also evident because he is shaking the spear which is held by Bacon. He is likewise a shake-spur actor, as is shown by his wearing one spur only, which is upon his 'left' boot. In other emblematic writings and pictures we similarly get 'Shake-spur' meaning 'Shake-speare'.