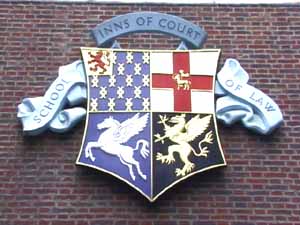 Gray's Inn is a well known law school located in London. Francis Bacon had attended school here and held residence in Number 1 Gray's Inn Square for many years. To commemorate Bacon's life, inside the stairwell to Bacon's old residence there are images of paintings when he was England's Chancellor, a portrait of Queen Elizabeth I, photos from the remains of the Nicholas Bacon home in Gorhambury, and a photo of the engraving Robart Tidir from the Tower. Richard Jones, an employee of Gray's Inn and enthusiast of Bacon's life wrote a poem called "Plus Ultra" that adorns the wall too.

Bacon held the position of Treasurer at Gray's Inn, Dean of the Chapel, and conceived and developed staged plays called Masques and Devices (spectacle or show) which were performed for the first time in the dining hall. Images of golden griffins can be seen on the outside of the building as they were in Bacon's day. The griffins were symbols of protection and were used to enhance a theatrical atmosphere.

The following is a list of Bacon's early productions as a playwright while at Gray's Inn:

Visitors to Grays's Inn can still pass through the 1723 gates to view the beautiful gardens and walks that Bacon planned and planted over 400 years ago. Alfred Dodd stated that, "We can see already the English Renaissance of Ethics, Science, and Art growing in embryo in the garden of Gray's Inn, then tended, planted out, watered and nurtured into sturdy growth by the creators' (Francis Bacon) hand tenderly, lovingly, and passionately."

See the page on Charles Dickens.