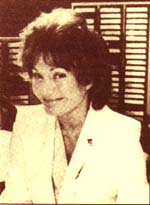 Mrs. Ward Gandy has a vast and varied experience with historical research of handwriting and circumstantial affects upon it, have enabled her to write articles and present academic papers Universally. Her widely published articles on writings of Christopher Columbus, Queen Victoria, and other eminent characters have received high acclaim. Children still benefit from Graphotherapy to overcome learning problems, and many international organizations use her skills for product promotion or charity fundraising.

In addition to her lecturing internationally to different establishments, Mrs Ward Gandy is a seasoned radio pundit, amazing listeners with penetrating character on health analysis of their handwriting so often that the BBC televised a broadcast on a QED Science Review. The news media frequently seek her professional advice and publish her many activities.

Her clientele is worldwide bringing regular projects from lawyers, airlines, local governments, and trading Standards Authorities. Over 2,000 cases have amassed since 1968.