Charles Dickens when he was a young man worked as a clerk at the Grays Inn Law School in London. He was puzzled about Shakespeare's life and stated in a letter dated June 13, 1847, to his friend William Sandys :

" I have sent your Shakespeare extracts to Collier. It is a great comfort to my thinking that so little is known concerning the poet. It is a fine mystery; and I tremble every day lest something should come out. If he had a Boswell, society wouldn't have respected his grave, but would have had his skull in the phrenological shop windows." 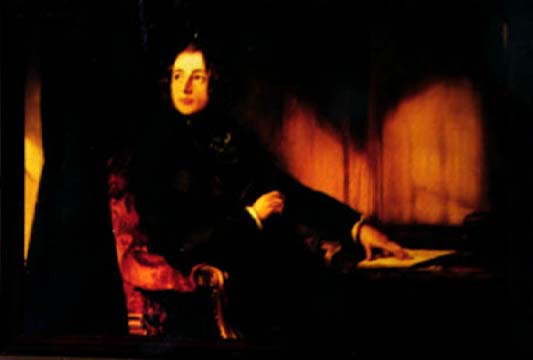 As I stare down at you from this picture on this wall
As you stare right back. I want you quietly to recall
That in eighteen twenty eight, I walked through these doors,
Climbed up the stairs and trod on these floors.
I slaved in this basement wishing that it were not so,
As a solicitor's clerk for Edward Blackmore and Co.
Here I learnt to hate lawyers and so I rest my case.
"Bleak House", its inspiration came out of this place.
After eating the fruit, how well I made use of the pips,
Spitting them at the lawyers along with the spittle from my lips.
I earned thirteen and sixpence rising to fifteen shillings a week,
Slaving over dusty ledgers while I was run off my feet.
My best friend was Potter, who encouraged sensitive artistic hearts.
We would frequent the theatres; even playing in small parts. Standing at the bottom of the stairs, looking up seemed a must.
I gloated, before my time is through, all this will turn to dust.
My youth was humiliating, it marked me all my life.
I was that youth that asked for more, no matter what the strife.
Determined, I resolved to change my sorry state,
Deciding that to be a mere clerk was not to be my fate.
Years later I wrote Nicholas Nickleby, David Copperfield, Oliver Twist,
The Pickwick Papers, A Tale of Two Cities, with a flick of my wrist.
The Christmas Carol, Barnaby Rudge, streamed from my flowing pen
My observations of love and hate in the hearts of men.
The youth that forms part of me, was formed at Gray's Inn
Where I led a life of little virtues mixed with little sin.
My name has become immortal, immortality has little need of recall
Young Dickens of 1 Holborn Court, now bids farewell to one and all.