Venus and Adonis at the White Hart Inn, St. Albans 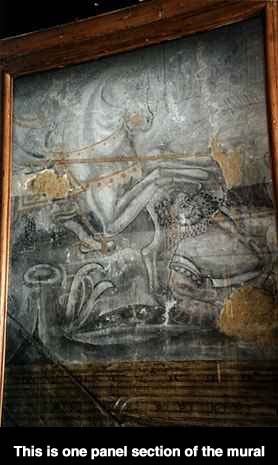 This important national treasure is now - for the first time - on view to the public. Here is the only contemporary painting in the world of a SHAKESPEARE work. The message of this mural is unmistakable.

The painting dates from a few years after the publication of Venus and Adonis in 1593. With its clear Rosicrucian symbolism, it constitutes yet another indication that the author of the Shakespeare plays was Francis Bacon, who lived only two miles away at Gorhambury.

Experts from the Warburg Institute have concluded that the subject is definitely the death scene from Venus and Adonis. The giant painting may cover all three walls of this room. It must have been commissioned for a special purpose, probably for meetings of a Rosicrucian lodge.

Dr. Clive Rouse, a leading art expert and historian, and a specialist in panel paintings, says that this large painting "is a major national treasure. It is priceless. I cannot overestimate the importance of this startling find. There is no Elizabethan wall painting of better artistic quality outside the great houses like Hampton Court."

Already visible are six details which prove that Venus and Adonis -- and all the other works in the Shakespeare First Folio -- are the creation of Francis Bacon.

1. Adonis is a key figure in Rosicrucian doctrine, as he represents the Sun, while the Boar represents Winter. Bacon was the leader of the Rosicrucian movement in England at this time.

2. Next to Adonis is the Boar. This figure bears a distinct resemblance to the boar depicted in Bacon's crest. 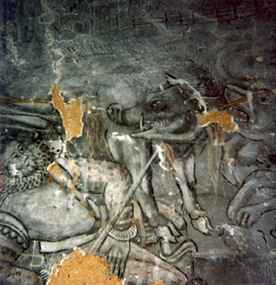 3. Above the boar a large house can be seen. This could represent a symbolic Masonic house and temple, as the two towers and the arch appear in Masonic books of the seventeenth century. The building contains some features of Bacon's house, at Gorhambury, only two miles away. At that time the White Hart Inn was on the border of Bacon's estate.

4. The Hill just to the right of the house could be a representation of Bacon's Mount, a mound just a mile away in Prae Wood, which Bacon used for astronomical observation. 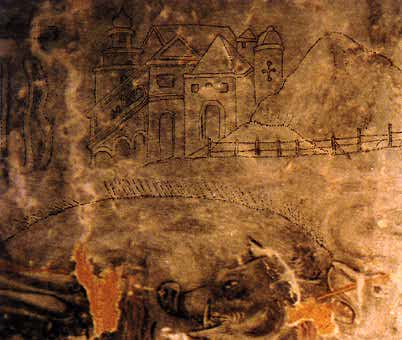 5. The Rose, which in the ancient legend grew from the dead Adonis, became the reborn man, with a new personality or name. A red rose can be seen in the mouth of one of the horses in this mural. 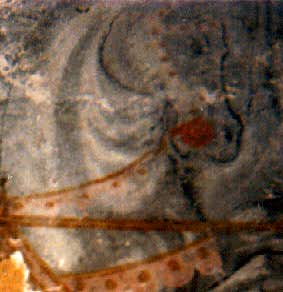 6. In the foreground of this painting can be seen the stump of a tree, with a clearly visible opening at the base. In Act One, Scene Two of The Tempest, Prospero tells Ariel that his mother, Sycorax,


did confine thee into a cloven pine
It was mine art that made gape
The pine and let thee out.

We have here in one symbol and one sentence the whole canon of the Shakespeare plays and poems. There is not one detail in this painting which refers to the actor of Stratford-on-Avon. 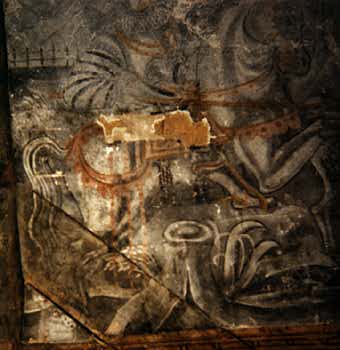 Michael Hardwick: "There is no reference to Stratford in Shakespeare's plays." 1968

O Hood Philips: "No record of Shakespeare's marriage has been found." 1972

Maria Rosignoli: "There is no name on Shakespeare's tombstone." 1968

Peter Brook: "Shakespeare is invisible. So, if we are lucky, we may for a few moments, even if Shakespeare wasn't Shakespeare, feel close to him and have the impression of knowing him." 1990

Umberto Eco: "Bacon is clearly the author of the plays of Shakespeare." 1989.

Colin Wilson: "Whoever wrote the plays and sonnets, it was not William Shakespeare." 1987

The Shakespeare Controversy
Comments on Shakespeare and Stratford in recently published books. 1945-1990. £5
Quotations from 280 books, most of them published since 1960.