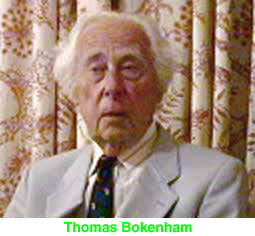 Answers by Thomas Bokenham, treasurer of the Francis Bacon Society, member since 1959, has written extensively on cyphers in Shakespeare and Bacon. He is noted for breaking the cypher of the Shakespeare Monument in Westminster Abbey.

(Special thanks to Francis Carr for making this transcript available)

1. To whom and on what grounds do you attribute the plays traditionally credited to Aeschylus, Marlowe, Ibsen, Shaw, and Brecht?

2. In the case of a play like The Revenger's Tragedy, where there is genuine doubt about authorship, certain rigorous criteria are used in determining the author's identity. What are the principal literary and textual criteria by means of which you attempt to attribute some forty plays and much nondramatic poetry to an author other than Shakespeare?

Shakespeare:
"Hamlet"
"To thine own self be true,
And it must follow as the night the day
Thou canst not then be false to any man."

Bacon:
"Essay on Wisdom"
"Be so true to thyself as thou be not false to others."


Shakespeare:
"The Tempest "
"The ivy which had hid my princely trunk
And sucked my verdue out on it."

Bacon:
"'History of Henry VII"
"It was ordained that this winding ivy of a Plantagenet should kill the tree itself."

Shakespeare:
"Richard II"
"Lo! as an English feast, so I regret. The daintiest last, to
make the end most sweet."

Bacon:
Speech to Parliament, 1604
"Let not this Parliamnent end like a Dutch feast in salt
meats, but like an English feast in sweet meats."

Bacon:
"Essay on Adversity"
Certainly if miracles be the control over nature, they
appear most in adversity."


Shakespeare:
"Henry V."
"How shall we stretch our eye when capital crimes, chew'd,
swallow'd, and digested, appear before us."

Bacon:
"Essay on Study"
"Some books are to be tasted, others to be swallowed and digested."

3. Can you give a rough estimate as to the proportion of imagery drawn from the theatre in (a) the playe of Shakespeare and (b) the English and Latin prose of Bacon; and how do you account tor any discrepancy?

T.B.-The discrepancy here is deliberate,as Bacon's works written under his own name, being philosophical and scientific, are non-theatrical. But a great number of Shakespeare's images are found in Bacon's writings.

Shakespeare:
"Hamlet''
"Costly thy habit as thy purse can buy, But not expressed in fancy: rich not gaudy."

Bacon:
"De Augmentis"
"This behaviour is as the garment of the mind and ought to have the
conditions of a garment. For first, it ought to be made in fashion;
second, it should not be too curious or costly."


Shakespeare:
"Winters Tale"
"Lilies of all kinds,
The flower-de-luce being one."

Bacon:
Essay on Gardens
"Flower-de-luces and lilies of all natures."


Shakespeare:
"Winters Tale"
"This is an art,which does mend nature, change it rather, but the art itself is nature."

Bacon:
"Adv. of Learning"
"It is the duty of Art to perfect and exault Nature."

4. What credence do you give to contemporary references to Shakespeare as the author of some or all of the plays made by Nashe, Neres, Heming, Condell, and Jonson?

T.B.-There is no evidence that these men were not using,knowingly or unknowingly,a pseudonym. Not all secrets become subjects of common knowledge.

5. Given that Bacon and Shakespeare were both well known in the relatively small city of London, what hypothesis do you want to put forward to explain how Bacon could have had complicated and frequent dealings with the Lord Chamberlain's King's Men snd possibly also with printers without this being known to Londoners like Ben Jonson?

T.B.- As I have said,this was a well-kept secret. Playwrights in those days could avoid the limelight much more easily than they can today. As for Ben Jonson,there is evidence that he knew who the real author was. Writing about Bacon in his Discoveries(1637) he deliberately chose an unusual phrase which he had used in the Dedication of the 1623 Folio as applying to Shakespeare:

1623
"Leave thee alone for the comparison of all that insolent Greece or Haughty Rome sent forth."

1637
"He hath performed that in our tongue which may be conpared or preferred either to insolent Greece or Haughty Rome,so that he may be named and stand as the mark and Acme of our language."

6. Can you name any Britlsh dramatist of aristocratic birth and university education who wrote some forty plays, most of which were commercial successes in their own day and many of which in translation have entered the repertories of the great theatres of the world?

T.B.-No, but we must remember that many University men in Shakespeare's day did write sucessful plays. Men such as Thomas Heywood, Francis Beaumont, Massinger, Middleton, Shirley, Marston. We also have later men like Hryden, Wycherley, Congreve and Otway, all of whom were University men. ln fact, it is rare that we find an actor who wrote plays in those days.

7. If Bacon did indeed possess the skills of a professional playwright writing to please popular audiences as well as the Court, why should he have written "Atque est res, quae si sit professoria, infamis est.....Intelligimus autem Actionem Theatralem?"

T.B.- It is a fact that if it is professorial, it is infamous..... But we understand actions on the stage. This would fit in well with Bacon's dislike of the academic philosophers, and his admiration of the dramatists of ancient Greece and Rome.

8. Why should someone possessed of a powerful and searching intellect have spent much time and great effort in dramatising the works of men with inferior minds like Greene, Holinshed and Lodge or in rewriting old plays - and how did he find the time?

T.B.-It is not certain that Bacon dramatised the works of Greene and Lodge. Holinshed was a chronicler from whom Bacon derived some of his historical facts. In rewriting old plays, it is true that some, but not all of his plots were derived from old plays and Italian and Spanish novels and, of course, the Danish legend of 'Amleth" but his great art lies in their adaption for his own didactic purposes.

9. Does the fact that no-one has cracked the Friedmans' codes suggest that cryptologists are no longer seeking clues as to authorship in the plays and poems of Shakespeare?

T.B.-The Friedmans did not invent any codes, but they certainly criticised some of the Baconian ciphers,though they carefully avoided some which are, in my opinion, unanswerable.

10. If it were proved tomorrow that the plays were written by someone other than William Shakespeare, would this alter the meaning of a single play, scene, speech, or line?

T.B.-Most certainly. The Shakespeare plays were undoubtedly written by a scholar of no mean quality. Moreover, nearly all of them have a deep esoteric meaning which many scholars are now beginning to realise. In his "Wisdom of the Ancients" Bacon explains his favourite fable of Orpheus as representing the image of Philosophy "which busies herself about human objects, and by persuasion and eloquence insinuating the love of virtue, equity and concord in the minds of men, draws multitudes of people to a society, making them subject to laws, obedient to government and forgetful of their unbridled affections, whilst they give ear to precepts, and submit themselves to discipline." In other words, Philosophy operates by persuasion and insinuation and this is just what thoughtful people think of the Shakespeare plays. If, however, those plays are enjoyed merely as a form of a few hours of dramatic entertainment, then it probably doesn't matter who wrote them.