Anthony Bacon (1558-1601) was the eldest son of Nicholas and Anne Bacon. He and Francis were foster-brothers who collaborated on plays, and advised the Earl of Essex.(Anthony was his secretary and foreign correspondent passing on secret political information from the Continent) Hepworth Dixon in his book Personal History of Francis Bacon says of Francis and Anthony:

...."day and night their tongues and pens are busy in this work of correspondence. Anthony writes the Earl's letters, instructs his spies,drafts for him dispatches to the agents in foreign lands. Francis shapes for him a plan of conduct at the Court, and writes for him a treatise of advice which should have been the rule and would have been the salvation of his life."

We learn from Lady Anne Bacon's letters that Anthony and Francis were having plays performed at Anthony's house near the Bull's Inn, Bishopgate, in 1594; and the Bull Inn itself was frequently used for this purpose. In a letter written by Essex to the Queen, he makes reference to Anthony and Francis, and says:

"Already they print me and make me speak to the world, and shortly they will play me in what form they list upon the stage."

This is direct proof that Francis was accustomed to producing plays, along with his step- brother, and that one or other(or both) of them was presumably the author of such plays.

The name Anthony occurs in no less than eight of the plays, including the Tempest, which has autobiographical references. In the Merchant of Venice Antonio figures as the generous brother. Not only were Anthony and Francis Bacon singularly devoted to each other, but on many occasions, such as in 1598, when Francis was in financial difficulties, and was actually seized and imprisoned at the instance of a Jewish creditor, Anthony came to his assistance and did everything in his power to help. This occurred shortly before the date usually assigned for the writing of this play.

In a letter written to Anthony when he and Francis were attending Grays Inn Law School, just before the 1594 Revels of Gray's Inn, with it's first performance(December 28th) of the Comedy of Errors , Lady Anne Bacon in her narrow puritanical ways exhorts him and Francis that they may "not Mum, nor Mask, nor sinfully Revel." It is quite evident that she was strongly suspicious of Francis Bacon's connection with the stage.

The story of Love's Labor's Lost concerns a youthful King of Navarre and three of his courtiers, the Lords Dumaine, Longaville and Berowne and three ladies of the court. The drama contains a real life love affair that existed between Francis Bacon and Marguerite Navarre when he was visiting France in 1576-8. The names of the three Lords are taken directly from the passport of Anthony when he was living in the Navarre territory (1583-92) The names are signed Dumain, Longaville, Biron(Berowne). The play also reflects Bacon's great interest in Freemasonry with numerous references to Masonic rites and rituals of the higher degrees. For more on the historical references of the Bacon brothers experience and the Shakespeare Play Love's Labor's Lost read The Great Vision, by Peter Dawkins.

A letter to Anthony Bacon on January 25, 1594, in which Francis asks his brother to send some new material for his private scriveners.

I have here an idle pen or two....I pray send me somewhat else for them to write... from my lodge at Twickenham Park.

From the Dedication to
Essays and Councils
January 30, 1597 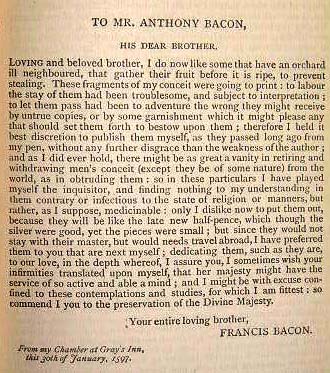 To learn more on the relationship of Francis and Anthony and their intrigues, adventures in Europe, their use of cyphers, while helping to establish the beginnings of the British Secret Foreign Service read Golden Lads by Daphne du Maurier and Alfred Dodd's, Francis Bacon's Personal Life-Story.